Joe McCarthy moves to the other side of the aisle.

In A country without churches Mr. Dominic Bouck, a Roman Catholic in the Dominican order (which makes sense given his first name) argues that religious organizations both provide a contrary voice against the state and also provide a general public good.

Set aside for the nonce the idea of churches seeking financial blessings from Caesar. That paragraph is outstanding. The purpose of the First Amendment, as I understand, is to permit dissenting voices to speak up without retribution. It wasn't so stoned college kids could burn flags or tweet about how repressed they are on the iPad their mommy bought them, although it does provide them cover as well. No, it was made so voices like Patrick Henry could speak out against the government, just as the religious beliefs and expressions of citizens could not be controlled by the state, as they were under the Crown. As someone who holds to non-resistance, I of course support the practice of conscientious objection which is another expressions of freedom of expression and association. I choose not to take up arms to kill others even when Caesar says we are supposed to.

What is really important in that paragraph is the idea that the state can make laws but there is no assumption or guarantee of accuracy. Too many people have a slavish devotion to the state and seem to think that because something is legal under the laws of Caesar, it must be beneficial. The opposite is more often the case, I can't think of many laws that actually make better the problem they purport to address. To a certain segment of the population, what I wrote above is tantamount to heresy. One must never question what the state has done or what it is doing or suggest that it might not be the proper mechanism for any future problems. Thanks to their control of the media machine, public school system, the government bureaucracy and virtually every university, they are able to go a long way toward silencing any dissenters. 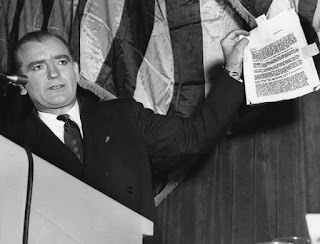 The infuriating reality is that many of these people seeking to quash any and all dissent directed at homosexual normalization are the same kind of people who cry McCarthyism at the drop of a hat. How ironic that they have taken up the McCarthy enemies list that allegedly was used to terrify people who were insufficiently patriotic and now use that same method to silence those who dare deviate from leftist ideology. Sadly, the irony involved is completely missed by the very people who need to see it most.

Religious people from across the spectrum, from Christian to Catholic to mormon and everywhere in-between, have done far more good than harm. Look at the history of universities and hospitals and you will often find a religious group. They have also been a counter-cultural voice when needed from abolitionists to civil rights leaders to contemporary advocates for the unborn. The mindset that says that people are not permitted to make decisions based on their most deeply held beliefs if those beliefs are religious is the mindset of totalitarianism and worship of the state. We have seen the bitter fruit of that mindset in the former Soviet bloc nations and in contemporary North Korea and Cuba.

Religious voices are sometimes on the wrong side, such as ministers in the South fighting civil rights legislation, but given the choice between a monoculture that only values statism and an open marketplace of ideas that sometimes are wrong, I will always choose the latter.
Posted by Arthur Sido at 9:07 AM