The Death Of The Blue Coat 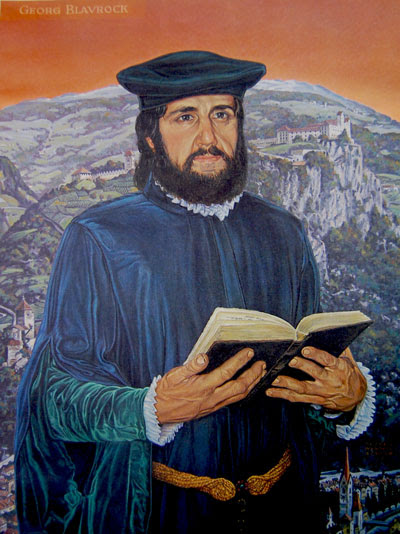 Today marks the 486th anniversary of the death of Georg Blaurock or Georg Cajacob, also known as the blue coat, one of the earliest Anabaptist leaders. He was the first of the three men in Zurich to be baptized as an adult at the hands of Conrad Grebel and in turn he baptized Gebel and Felix Manz. After several close escapes and being preceded in death by Manz and Grebel, Blaurock was executed by being cruelly burned alive by the Roman Catholic authorities on September 6, 1529.

So what, that was like 500 years ago! Can't we let the past be the past and focus on the future. Well, no we can't. I realized recently that in just over 2 years, on October 31st, 2017, we will recognize the 500th anniversay of the more or less "official" start of the Protestant Reformation. This event turned the world upside down and set the conditions for the world we live in today, from the nations of Europe to the World Wars to the very existence as it does of America. A lot of people will be talking about Luther and the Reformers, some in praise and others in condemnation but the struggle between the Reformers and Rome was not the only thing going on at this time.

For me, we can never pretend that what happened didn't happen. To do justice to our history we cannot try to cover or remove the warts because they are what made us who we are. We must remember why Blaurock and others were killed, who killed them and what they were teaching that was so dangerous to the religious powers. If we forget that in the vain hope of some notion of ecumenism, we do a disservice to their life and their death and make them both in vain. I am not looking for recriminations or demanding an apology from modern Roman Catholic and Protestant leaders for their treatment of the Anabaptists but I am asking that we don't forget what made them such a peaceful yet existential threat in the first place.

So today as you go about your day, take a minute to remember the Blue Coat!
Posted by Arthur Sido at 8:00 AM