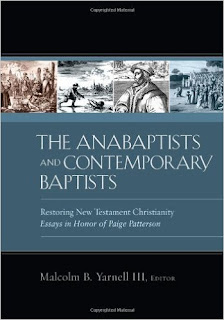 This is not a "Trail of blood" style book that attempts to create a Baptist version of papal apostolic succession. It is more of a historic look back at a group with a lot of similarities to Baptists. The book argues, successfully in most ways, that Baptists today can learn from the Anabaptists and explains how they can speak to our contemporary setting, something I have advocated for over the course of the last few years amid seismic shifts in our religious culture and the church itself. These essays are, as noted by the title, written in honor of Paige Patterson and come from megachurch pastors as well as seminary teachers and students. I was surprised to find that I really enjoyed Rick Warren's chapter, I am not a big fan of his but taken on the merits of the chapter it was excellent although some of it was hokey as can be ("I want to build the bridge of love between my heart and theirs so that Jesus can walk across." (Kindle Locations 2113-2114) Save it for Hallmark!)

The chapters range from highly accessible to very academic. One of the greatest strength of this book is also often its greatest weakness. Some of the later chapters contain great information but are pretty deep, scholarly articles that I felt like I was wading through and they may not be as accessible to the average reader as some of the earlier, more popular level chapters. I admit to skimming a bit in these chapters, the academic minutiae was a bit much for me and I would imagine that is true for a lot of even above-average Baptists who are familiar with church history.

This is book is especially well suited for those with minimal background in Anabaptism. Especially useful are the chapters dealing with Balthasar Hubmaier, a powerful theologian who gives us a glimpse into the thinking of the Anabaptists and, if I can be permitted an editorial comment, shows that the contemporary neo-Anabaptist movement has very little in common with the Anabaptists. We also see some of the more questionable theological notions of Anabaptists, something I give them a lot of latitude for since they were a little too busy being hunted, tortured and murdered to sit down and work out the niceties of theological positions. For the historic Anabaptists, their most powerful theological statements are read in the blood, not in their books.

Below are a couple of choice quotes:

The modern generation is largely rootless. They are fatherless and rootless, and so they get blown around like tumbleweeds. When I talk about Radical Reformers, I am talking about people who say, “We have to go back to the root.” The Magisterial Reformation did not go far enough. You must go back to the New Testament, to the apostolic church. The Anabaptists and other Radical Reformers were “radical” in the truest sense, not as being extreme but in the sense of returning to their roots. (Rick Warren)

From 1520 to 1560 approximately three thousand legally sanctioned executions for heresy occurred. The Anabaptist movement accounted for almost two-thirds of those executed. (Thomas White)

That was staggering to read. Almost 2/3 of the executions were of Anabaptists. I knew the percentage would be significant but not that high.

In his discussion of the “church,” Hubmaier noted the importance of “love” in the practice of church discipline or fraternal admonition. He had Leonhart ask, “What authority do those in the church have over one another?” Hans replied, “The power of fraternal admonition.” Leonhart then inquired, “What is fraternal admonition?” Hans answered, “One who sees his brother sin goes to him in love [zu ˚ im geet auß liebe] and admonishes him fraternally and quietly [strafft in bru ˚ derlich in der still] to abandon such sin. If he desists, he has won his soul.” Hubmaier emphasized “fraternal admonition [bru ˚ > derlich straff]” or “brotherly love,” which instilled mutual accountability within the congregation. His Anabaptist ecclesiology was set apart from the priestly admonition in the Catholic Church, which lacked mutual accountability between clergy and laity.

Living at a time of many changes and much duress in the ecclesiological sphere for someone of his convictions, Hubmaier saw moral laxity as the “besetting weakness of Protestantism.”(Simon Goncharenko)

Luther becomes a reformer because he cannot attain assurance of salvation in the system of the Roman Catholic Church; Oecolampad becomes a reformer because he cannot find the new creature in Christ sufficiently realized in the Roman Catholic Church. Luther deals with justification; Oecolampad, following 1 Thessalonians 4: 3, says voluntas Dei est sanctificatio nostra. For Luther, the focus is on faith; for Oecolampad, on that which flows from faith— Piety, holiness, love— as well with the individual as with the overall entity of the corpus Christi mysticum. Luther emphasizes a Christianity more affected by Paul; Oecolampad one more affected by John.

That is pretty representative of what you should expect. For anyone who is a Baptist, Anabaptist or just a student of church history, The Anabaptists and Contemporary Baptists is a great resource to build those bridges we need to learn from the past and hopefully avoid repeating some failures.
Posted by Arthur Sido at 2:30 PM