A few days ago, one Roger Olson, writing for Patheos, wrote a rather lengthy and largely ignorant post titled: Is Mormonism Christian? (Long But Everyone Interested in Mormonism Should Read This). Patheos often is a breeding ground for aberrant teaching, although some of it is decent. This is not one of the decent ones.

Now at the outset let me say that I know of Olson mostly for his Quixotic tilting at the Calvinst windmill. He is a fountain of trite and demonstrably false quips about "Calvinism" so I wasn't expecting much. I try to stay out of the Calvinist/Arminian wars as best I can but I simply cannot stomach those who mischaracterize those they disagree with. Mr. Olson may get a wide audience and publish a lot of books but based on his interaction with me and with others who know a lot more about mormonism than he does, he comes across as a middle-schooler on the playground rather than a serious academic. Here is a screen shot of my comment, his response and my rejoinder that never made it through moderation (although he seemed effusive in his praise of mormon comments). Click to enlarge the photo: 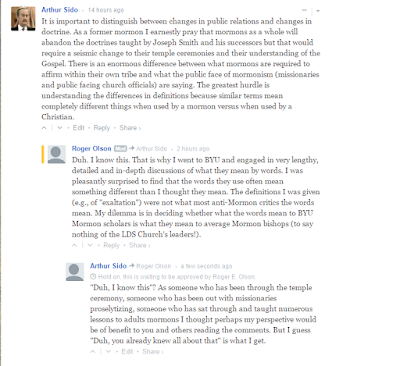 "Duh, I know this"? I didn't think my comment was "Duh" worthy but there you go. I guess that is what passes for academic discourse these days.

Back to the article itself.

From the get-go the question in the title itself is ridiculous. No orthodox Christian tradition has ever considered mormonism to be Christian in any sense of the word. You might as well have a post titled "Are lemons made of uranium?". Any theologian with even a cursory understanding of Christian teaching and mormon teaching knows that we are not talking about two different flavors of ice cream, we are talking about the difference between a rock and a tree. Also, again as anyone who pays attention realizes, the mormon religion has changed tactics over the last decade or so, moving away from the prior position of emphasizing how different mormonism is from Christianity to trying to soften the public face of mormonism to emphasize the alleged similarities. I don't even know if a lot of younger mormons realize how much the alleged great apostasy and the vitriolic way that Smith describes "Jesus" speaking about orthodox Christianity is foundational to their religion. It is all P.R., as the response to LDS teachings becomes more widely disseminated thanks to the internet and their aberrant teachings more clear in the public square, mormons have had to change tactics to keep bringing in the converts. Olson seems to blithely accept that Millet is in the vanguard of the change in mormonism to become more orthodox. That is a wonderful idea but it is impossible. Every aspect of mormonism, from the "prophet" who claims direct revelation from Christ to the temples where pagan ceremonies are held to every bit of the mormon proselytizing machine would have to be torn down. My fervent prayer is that mormons as a people leave mormonism and come to saving faith in Christ but I have no hope for orthodox reform of the religion itself.

Second, Olson may consider Millet to be his buddy but Millet has no authority to speak for mormonism. When the current "prophet" declares that Joseph Smith was a liar, as he was, and that the "Book of Mormon" is a fraud, which it is, and that the teachings of all of those who came before Monson and claimed the title of "prophet" were also liars and deceivers, then we can cheer their progress. Until then this is all just a bunch of smoke and mirrors.

Third. Here is the thing about false prophets and wolves. They lie. It is kind of what they do. I don't know Millet but I imagine that someone that deep in the mormon hierarchy and with the ear of many top mormons has to know that what they teach is untrue. He has to. So his continued defense of mormonism, nuanced as it may be, is tantamount to lying and false teaching. He is a wolf, not a slightly confused Christian.

Fourth, Olson's response to fellow Christians often seemed (as shown above) to be arrogant, juvenile and downright nasty. His use of the term "Anti-mormon" to describe those who have been doing the heavy lifting of witnessing to mormons while he hides away in his ivory tower is insulting and childish. I got a chuckle of out the statement he made on his follow-up post, , where he states:


This blog is for civil, respectful, constructive dialogue, not preaching, flaming or advocacy.

Ah, I see. Maybe where Olson comes from "Duh, I know this" qualifies as "civil, respectful, constructive dialogue" but it doesn't where I am from.

Olson's final paragraph is his follow-up post, What I Learned from the Responses to My Post about Mormonism tells you everything you need to know.

That kind of says it all. In one fell swoop he discounts the cultic behavior that left scars on virtually everyone I know that left mormonism, myself included. I know of families that are divided and devastated by this cult. I know first hand the cultuc tactics used to scare people into staying in line On top of this he sees "enough Christianity" in mormonism and sees it as a "Christian-based world religion". In what possible way? Taking aside some common terminology with a different meaning, which Roger "Duh, I know this" Olson claims to understand, there is not one shred of Christianity in mormonism. None. It is a polytheistic, pagan religion more akin to Islam than to Christianity. Trying to find common theological ground with mormonism is like trying to find common theological ground with ISIS. That is not an exaggeration.

Mr. Olson is not doing anyone any favors with his kid gloves approach to mormonism coupled with his pompous treatment of fellow believers. Hopefully someone with more time on their hands can disassemble his posting for the benefit of the church because Roger Olson has done Christianity and those trapped in mormonism an enormous disservice.
Posted by Arthur Sido at 10:00 AM

Email ThisBlogThis!Share to TwitterShare to FacebookShare to Pinterest
Labels: mormonism

"Roger Olson has done Christianity and those trapped in mormonism an enormous disservice".

I am very familiar with Mormonism and both their hidden and public ways. My wife was a Mormon and her mother lived and died a Mormon. Both her brother and sister remain staunch defenders of the Mormon faith. I have read and studied most everything Sandra and Joseph Tanner wrote, I have visited the Salt Lake temple – and the Tanners across the street. I have witnessed and debated numerous Mormons as well as their biking missionaries. I have sat with my late mother-in-law for many hours going through scripture and praying and crying with her, hoping to open a door for the Holy Spirit to open her ears and eyes to the truth. All of this was to no avail. Nothing I could do or say would change her mind. The day she died I cried for her redemption but I know in my heart that she stayed true to Joseph Smith and his false doctrines of Satan.

I make this point to say that it is mostly the same with the every Christian denomination and the majority of people who are their supporting “members” when it comes to the vast array of divisive, harmful and heretical doctrines of man that are the foundation of these harlot churches.

These entities and their supporters have strayed so far from the Apostles’ teachings that it is almost impossible to grow up in this world as a “Christian” and not be subject to the lies that they teach. And with that, in defense of any given denomination, you will find that the blind and deaf faith of false indoctrination almost always prevails over the truth of the Gospel that was once for all given by the Messiah Jesus and His Apostles.

That is why I used to cling to many false doctrines of the church such as, the trinity, tithing, paid pastors, original sin, and many more until I allowed the Spirit of Christ to open my eyes and rule my life.

I would only exhort you brother, as you are a former Mormon, to not stop with shedding the doctrines of Joseph Smith in your journey of regeneration to the truth of the Gospel of the Kingdom of God, but to also examine more closely the doctrines of church bishops, who were far removed from the influence of Christ’s Apostles’ teachings and were highly influenced by Greek philosophy, Roman emperors, and paganism.

Blessings to you in your search for the truth in all things.

I thought your post was right on mark. Mr. Olson's "Duh" rejoinder was churlish and unbecoming. I read Olson's post entitled, "What I Learned from the Responses to My Post about Mormonism" and was offended by his statement that "There are people who are heavily invested in keeping groups they consider cults from being considered anything else. There exists an 'industry' of anti-cult propaganda." In reality, there are many devout and biblically literate individuals who are heavily invested in being disciples of Jesus Christ; therefore they feel a sense of duty and responsibility to guard the flock against ideologies that would lead them away from the truth and life found in the the Biblical gospel. Those of us who expose the falsehoods and deceits of Mormonism do so at our own expense. I've spent thousands of dollars of my own money to publish two books, to run and maintain websites and blogs, to do a podcast, and to travel to speak in various venues to share the gospel of redemption through the Messiah Yeshua. I'm a mother of ten living from paycheck to paycheck, yet I make financial sacrifices to bring the truth to those who are lost in the false religion of Mormonism. Doing this is not conducive to "Winning Friends," although I do hope I'm able to "Influence People." I resent Mr. Olson's implication that those of us in ex-Mormon ministry are somehow profiting financially and socially by our efforts. Olson further points out that "To the extent that Mormons believe and teach the above (he lists some Christian doctrines), they are Christians...To the extent they teach and believe (a list of unbiblical doctrines), they are not Christians." So, exactly how does is that supposed to play out in real life? To the extent that I eat vegetables I'm a vegetarian. Never mind that I enjoy an occasion steak, which would make me NOT a vegetarian. Huh? I do not doubt that there are "saved" individuals sitting in Mormon congregations all over the world. Perhaps they don't know the foundational doctrines of Mormonism, or maybe they reject those teachings but still attend because of family obligations, etc. God is judge, not us. However, until the LDS Church officially rejects the heresies it was built upon (polytheism, replacement theology, man can achieve godhood, works-based salvation, and more too numerous to list here), as a religion it does not fall under the umbrella of Christianity.