The solution to the seminary student loan debt situation

While walking by the Sea of Galilee, he saw two brothers, Simon (who is called Peter) and Andrew his brother, casting a net into the sea, for they were fishermen. And he said to them "If you sense a calling to ministry I can recommend several solid Bible based seminaries. Please pick one and if you are accepted go and spend the next three years learning how to be a minister. Don't worry about your jobs as fishermen, the church will support you after you get your degree. Once you graduate with a bunch of debt and have been awarded the M.Div. and after you have been properly ordained by an official religious organization you can follow me, and I will make you fishers of men." Immediately they left their nets and followed him went online to apply to seminary. (Matthew 4:18-20 remix) 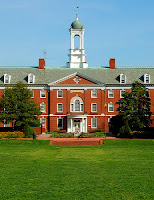 Russell Moore is the guest writer for today's Houses of Worship column on the opinion page of the Wall Street Journal and the title of his post drew me like a moth to the flame, Student-Loan Debt and the Future of Seminaries. This is a topic I have written about a lot and it is one that, like so many others, gets very little attention. We just assume that men have to go to seminary to get an education so they can be "ministers" so young men feel obligated to leave their local assembly, head off to seminary and get an expensive vocational education before looking for a job that is likely to not pay nearly enough to offset the debt they leave seminary with, a debt that Dr. Moore (a dean at Southern Seminary) estimates at around $30,000 to $80,000.

He gets close to where I think this conversation should go, recognizing the need to nurture young men locally although ultimately he sees the goal as sending them to seminary anyway. After all Dr. Moore is a seminary guy although he also tends to be willing to buck tradition...


There will always be those who get a law degree or an M.B.A. (and the resulting debt) and then sense a call to ministry. The history of the church—see Augustine and John Calvin, not to mention the original 12 disciples of Jesus—is filled with "second-career" ministers. But the ideal pattern is for churches to seek to identify, early in life, those who are gifted and called to ministry; the churches should then be held accountable for guiding these potential ministers in seeking strategic, sound and affordable training. What if local congregations didn't merely rely on the availability of seminary graduates who decided to embark on a theological education after college, but actively kept an eye out for the stirring of the religious calling in young people all the way back to vacation Bible school?

What struck me as interesting is that men who have a law degree or an M.B.A. would need to sense a "call to ministry" and seek a "second-career" as a minister. For all the talk of vocational ministry as a "calling" we can't avoid talking about it like a job because that is what it is.


The real solution here is not new one but rather very old. Instead of sending aspiring ministers off to get a seminary education and then have them look for a job among people that likely are strangers (until a better job...er calling....comes along), we should be recognizing and appointing as elders men who exhibit the Biblical qualities of eldership from within our own local assemblies. The idea of hiring men to become elders in a local gathering of believers has no basis in the Bible (This is why I left you in Crete, so that you might put what remained into order, and appoint elders in every town as I directed you—Titus 1:5 ). The church doesn't need more over-educated young men saddled with debt and burdened with unreasonable expectations, we simply need to raise up and recognize those already among us and seek to imitate them.

This ties in to an oldie but goodie I wrote a while back, Home Cookin' and I stand by every word.

I don't consider myself to be an anti-intellectual. I read a lot and write, albeit poorly, on a regular basis. I appreciate having scholars in the church who can translate the Bible and who write weighty tomes about the deepest issues of theology. What we don't need are professional ministers in every location around the world who have taken coursework on hermeneutics and homiletics. We just need to equip the men we already have right where they already are to minister to the people right around them. That is cheaper in terms of student loan debt, more effective and frankly more Biblical.
Posted by Arthur Sido at 7:30 AM

For years I've been writing on my blog that the greatest failing of the local church is in discipleship training that results in raising up pastors from within. If a church can't develop its own pastors, then the disciplemaking program in it is broken.

Here's to hoping that our country's economic flameout proves to be the impetus to fixing many of the local church's lacks.

We can hope and pray it will.

Arthur,
Even though my life has mostly been in the traditional scene, I have long said that the local assembly ought to be the theological/practical training ground for ministry of any kind, and that those who minister ought to be the whole assembly functioning according to the gifting recognized by that assembly.


Your last paragraph is spot on!

I've thought about this issue quite a bit as well. One of the things that continues to baffle me is why it seems necessary to farm out such skills like:

all of which are listed as classes at Southern Seminary and cost, if you aren't a Southern Baptist, nearly $1,300 a piece according to this year's tuition rate. Now, it's one thing to inquire of a trained Bible scholar in such skills as Greek, Exegesis, and History, but I don't think those skills should be relegated to only those interested in fulfilling a role as a pastor (simple church or institutional church). I'm a simple church guy, so I would love to see more strictly Bible classes available at a more affordable rate. But, high tuition is needed for building programs, parking, retirement pensions, among other things.

(This comment is officially too long, but...) I have felt that urge to go deeper in the word. I know that feeling of wondering if the Lord has a particular calling/vocation on your life. But let's not forget he has one for every believer. If we have been given the gift of teaching, by all means, we should seek to learn more, study more, etc. But fundamentally, we should be able to grow such traits listed in the classes above in any well-funtioning body of believers. Hope that makes sense. Many of my favorite authors are Bible scholars in such institutions, and I am very grateful for them. My hope is that in the years to come, more of their knowledge and understanding will seep into the church for less cost. Not sure how that would look, but it would be a wonderful asset to the body.

I eventually got married, rectifying one of those supposed lacks, but I never ended up in Christian ministry full-time. I'm not even much of a part-timer, save for a few hours a week playing on our church worship team and church-issue blogging I do, both volunteer.

Seminary or not, none of it makes one iota of difference. You're either in or out. Somehow, I ended up out, no matter which hoop I jumped through. YMMV, but the whole thing smacks of junior high school recess cliques and popular kid shenanigans. Either way, it's no way to run a church or ministry.