The difference one little word makes

Language is such a funny thing. The spoken and written word is so crucial to human interaction and yet is also so often the source of anger, contention and cruelty. With our words we tell our family we love them, we comfort a friend who is hurting and most importantly we preach Christ and Him crucified. With words, first orally and then in writing, God has revealed Himself to His people.

We also use words to destroy.

The word "slave" for example turned a human being into a piece of property. Auctioning off a slave, tearing slaves from their families, abusing and even killing a slave is much easier than selling a person, tearing a father from his children or murdering another human being. The Nazis were masters of this. When a Jew became "vermin" it was easier to cram them into a room and gas them. Our hands are not clean here either. Look at some of the dehumanizing ways the Japanese were presented in American propaganda in World War II, as subhuman beasts that had it coming when we dropped atom bombs onto women and children. 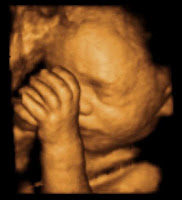 In our culture a simple change of a word dehumanizes another group. A mother who carries a child that, expected or not, will reach term is carrying a "baby". They talk to their baby and name her. No one asks "have you picked out a name yet for your fetus?". A woman who decides for whatever reason that she is not able or willing to care for a child or carry her to term and placing her for adoption is told by our culture that her baby is now a "fetus", a nice clinical word or even better the baby becomes a "choice", a concept steeped in emotion and political overtones that reduces an unborn child to a political issue like tax policy or interstate commerce.

If you are driving drunk and you kill an expectant mother and her unborn "baby", you get charged with double homicide. Kill a "fetus" in an abortion clinic and you get paid by that woman and receive financial incentives from the same government that would prosecute that drunk driver. With one simple word change, a "baby" loses any legal protection and becomes a "fetus".

Not every unborn child has the blessing of an intact family where a married mom and dad pick out names, get nervous about having the hospital bag packed and gently argue about paint colors in the nursery. Some unborn children are being carried by women who never wanted to get pregnant, or where the dad has already taken off. Some live in poverty and have no way of caring for a baby. I understand that. I see that every week where I volunteer. I see the fear in the eyes of young women, some in their teens, as they wait to find out if they are pregnant, staring blankly at their phones to avoid eye contact. I talk to the dads in the other half of those relationships and am so thankful that so many of them are trying to be dads to their unborn child.

Fulton Sheen had a tv show called Life IS Worth Living, apparently the tv network wanted to call it Is Life Worth Living? Fulton challenged the network people and stating that their chosen title was negative, but simply changing two words around it became a title of HOPE :)because as we all know, LIFE IS WORTH LIVING!