Blogging Through The Bible: Hebrews 5:1-6

For every high priest chosen from among men is appointed to act on behalf of men in relation to God, to offer gifts and sacrifices for sins. He can deal gently with the ignorant and wayward, since he himself is beset with weakness. Because of this he is obligated to offer sacrifice for his own sins just as he does for those of the people. And no one takes this honor for himself, but only when called by God, just as Aaron was. So also Christ did not exalt himself to be made a high priest, but was appointed by him who said to him, "You are my Son, today I have begotten you"; as he says also in another place, "You are a priest forever, after the order of Melchizedek." (Hebrews 5:1-6)


Why don't we have a distinct priestly caste among God's people today?

That certainly is how things worked in the Old Testament and the priests of the Old Testament played a major role in the life of God's people. Moreover they were very clearly distinct in the way they were viewed and functioned within the greater body of God's people. Many groups, from Roman Catholicism with a distinct priestly vocation to mormonism with their aberrant understanding of "the priesthood" to the unspoken but very real clerical class among many Protestants, still retain a vestige of a priestly caste and often turn to the Old Testament for support. Certainly there was a unique group of men known as the twelve apostles, the disciples of Jesus but that seems to take on less importance after the cross as the church spread and elders were appointed from among the Body to serve in the Body. We do see this and it is right and proper to imitate those who have gone before but what we don't see are a distinct priestly class among the church. Why? 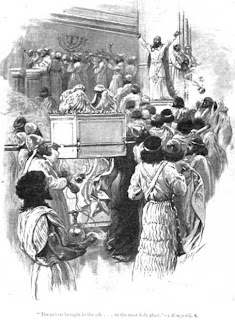 The crucial difference is that human priests were just men like anyone else, flawed and sinful. As the writer of Hebrews makes clear, we have a perfect High Priest, one who doesn't have to offer up sacrifice for His own sins and therefore makes His sacrifice available to others. A perfect sacrifice from a Lamb without blemish atones for every sin of His people. The priests of the Old Covenant were a shadow that served a temporary purpose under a covenant that has been made obsolete, just like the temple and the sacrificial system and the nation of Israel.

It is so important to get this. I firmly believe that too many sheep have forgotten that they are just sheep. None of us are called to be above the church, to rule over other sheep. We are all sheep and we have one Shepherd. Many of us, although not nearly enough of us see it, are called to lead by example, to be be encouragers and equippers as sheep who have been following the Good Shepherd longer than newer sheep.

With Jesus Christ as our perfect, flawless High Priest we have no need for human intercessors or priests. Indeed we all minister in different ways as priests, not to offer sacrifices but to serve our God as His ambassadors, doing works of mercy in His name and proclaiming His Son to the lost.
Posted by Arthur Sido at 11:00 AM

Email ThisBlogThis!Share to TwitterShare to FacebookShare to Pinterest
Labels: blogging through the bible, hebrews, priesthood of believers