Three years ago I wrote this post, remembering D-Day and the hundreds of thousands of young men on both sides sent to kill one another by someone else. What an incredible loss of life, men in the late teens and early twenties dumped into the ocean to storm a beach held by other men in the late teens and early twenties. A whole generation of young men engaged in a war that devastated an entire continent and left millions dead. I don't look back with nostalgia on this day but rather as a stark reminder of the depravity of man that is so often expressed in the bodies of young men dying for this cause or that cause. The three years since I posted this have been years when I have been transformed by the words of Christ regarding love of enemy and humble sacrifice. Patriotic nostalgia has been replaced with sadness. I don't think we will be watching Saving Private Ryan or Band of Brothers today. 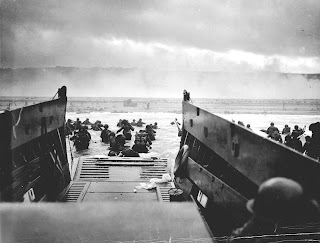 
65 years ago today, June 6, 1944 thousands of young men waded ashore on D-Day. Young men, in their late teens and early twenties, men who should have been getting jobs, going to school, enjoying their youth instead signed up to free Europe from the Nazi scourge. I cannot imagine what it was like to sit in those landing craft at an age when I was in college, clutching a rifle and watching the shore get closer. A shore littered with obstacles, barbed wire and overlooked by battle hardened Nazi soldiers behind machine guns.

These young men, many who lost their lives, started the end of the war in taking and holding that beach. Because of their sacrifice and courage, the Nazis were overthrown and Europe was freed. All of Europe, and America and the world owe a debt of gratitude to these men. Without these men, one teenager with a rifle at a time, setting aside the urge to flee or hide, the world would be a far different place.

To those who served, at D-Day and everywhere else, a nation still remembers and says: Thank you.
Posted by Arthur Sido at 9:57 AM