I was part of a pretty intense conversation this week regarding pulpits. It was actually "in person" rather than online which is kind of unusual. Pulpits are such a common part of the church experience in the West that they are not given much thought at all. We assume that the most important messages in the church come from pulpits and often we see people bemoaning that this is not heard from the pulpit or that is not heard from the pulpit. A church without a pulpit is unthinkable. Needless to say, I disagree and at  minimum think we need to talk about this unique piece of furniture.


There are three schools of thought when it comes to pulpits in the church.

1) Pulpits are a sacred, reserved space for the “preaching of the Word” by those in the proper ordained position of authority. Only pastors or perhaps elders are permitted to use pulpits. When a man steps up to the pulpit, he is tasked with proclaiming the oracles of God in a unique sense and it is in a very real sense a sacred space.

2) The pulpit as practical piece of furniture. Pulpits and the platform they typically are set on, elevating the speaker above the audience, are little more than a pragmatic solution allowing the audience to better see and hear the speaker and in turn providing the speaker a place to lay out notes, a glass of water perhaps and providing a comfortable place to speak.

3) The pulpit as symbol of hierarchy. The pulpit serves as a barrier between the speaker and the rest of the church, creating a very real perception of hierarchical structure in the church and making a mockery of the notion of leaders as servants. Pulpits are a hold over from Roman Catholicism and have no place in the church. Pulpits imply a superior-inferior relationship within the church.

The first school of thought is to me the most dangerous and unbiblical. The notion of a physical space reserved for a particular class of men smacks of the Old Covenant priesthood which has been made obsolete and inappropriate in the New Covenant church. It is an ugly left over unreformed from the Reformation period and a remnant of the medieval Roman church and therefore has no place in a one-anothering church.

The second position might seem to make sense but only if we assume that a primary function of the gathered church is to listen to a speaker. That is perfectly within the cultural conditioning most of us have received for what it means to be “the church” but it is without command or example in the Scriptures. While most of the church just assumes that a monologue talk, generally called a sermon and described as the act of “preaching’, is the focus of the gathered church, I believe that the New Testament describes something more akin to a family gathering, a group of friends, brothers and sisters in fact, meeting to encourage and exhort one another rather than a weekly meeting to listen to a speaker. In such a meeting a pulpit becomes at best superfluous and at worst an impediment. 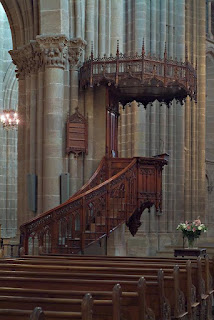 No surprise, I fall into the third category although I once was in the first. For me, pulpits and pews go hand in hand and neither has precedence or command from the New Testament. Not only is the Bible silent on the issue but the perception of the pulpit and pew is of one man over the rest. Look at the picture to the left. The picture is of the pulpit where John Calvin regularly delivered sermons, an ornate perch that he would ascend to before speaking, looking down on the masses below. We rarely see pulpits like this anymore but merely moving them down from the wall and onto a raised platform does little to change the connotation. Pulpits are one and the same with other distinctive trappings of clericalism like grandiose titles (“Right Reverend”), clerical garb like vestments and collars and demands of privilege and deference based on education and ordination. A cleric without a collar is still a cleric.

I am curious what readers think. I assume not many people that might read this fall into the first school of thought (but I would like to hear from you) but many likely fall into the second and third. Is this a big issue or not? Does the presence of the pulpit carry a connotation of authoritarianism and hierarchy or is it just a convenient piece of furniture that enhances the ability of the speaker to convey a message and the audience to receive it? Are pulpits necessary in the church, healthy for the church, even appropriate at all in the church?

As a fun aside, check out Spurgeon’s thoughts on pulpits, no one could turn a phrase quite like CHS!
Posted by Arthur Sido at 1:20 PM

Email ThisBlogThis!Share to TwitterShare to FacebookShare to Pinterest
Labels: preaching