“Then he will say to those on his left, ‘Depart from me, you cursed, into the eternal fire prepared for the devil and his angels. For I was hungry and you gave me no food, I was thirsty and you gave me no drink, I was a stranger and you did not welcome me, naked and you did not clothe me, sick and in prison and you did not visit me.’ Then they also will answer, saying, ‘Lord, when did we see you hungry or thirsty or a stranger or naked or sick or in prison, and did not minister to you?’ Then he will answer them, saying, ‘Truly, I say to you, as you did not do it to one of the least of these, you did not do it to me.’ And these will go away into eternal punishment, but the righteous into eternal life.” (Matthew 25:36-46)

Scripture is full of references to visiting those in prison. Jesus Himself was arrested and held by the authorities before being executed. Paul the evangelist and apostle spent a great deal of time in prison. In fact he used this time to his advantage, writing to the church in areas he had ministered and witnessing to his guards. The apostles were imprisoned and held for trial on more than one occasion. The Gospel has often lead to Christians being imprisoned and prison are a huge and increasing mission field for the Gospel. 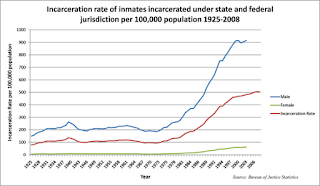 In America we have a culture of incarceration. There are millions of people in prison right now and millions more that have served time in the past. I cannot verify the accuracy of this chart but it certainly seems reasonable. Starting in 1980 or so the number of incarcerated Americans has exploded. Some of this can be attributed to the increase in population but the rate of incarceration has gone up much faster than the increase in the population. For a lot of the genteel, polite, "Sunday best" American church, prisoners and former prisoners are a scary thought. We like having prisons and jails to keep the bad guys away from us, all too often forgetting that before we came to Christ we were under the condemnation of the most just and holy of all Judges.

So what does this mean for the church? For starters it means that we need to take seriously the words of Christ, both in Matthew 25 and in the Great Commission. Going to all the world with the Gospel to make disciples and visiting "the least of these" in prison go hand in hand. I am certain that there are plenty of God's elect sheep in the state penitentiary just as I am that there are plenty in the crowd at a revival and the pew on Sunday morning. Plus, and not trying to be cute here, people in prison are not going anywhere so we have to go to them. I think the Gospel is often best received, in other words hearts are most prepared, when a person is at the end of themselves and has nowhere else to turn. If that doesn't describe someone in prison, what does?

Jails and prisons are scary, unpleasant places. I have visited people who were incarcerated on a couple of occasions when I was a vocational pastor and it is a weird feeling for someone who has never been there before. I am not sure it ever would be comfortable but that is kind of the point of prison isn't it? I am convinced that "church" is perhaps the least conducive ground for the Gospel presentation. It is far too easy for an unregenerate believer to think they are right with God based on attendance, offering and attire. We need to go to the hard places, the pregnancy resource center where a frightened young woman just found out she is pregnant, to the prisoner in a place that we would never voluntarily go, to the homeless and the prostitute, to the nations where the Gospel is met with open hostility and preaching the Gospel is not mere stagecraft but real life changing and life endangering preaching in season and out.

I am trying to find some resources here locally to get involved in prison ministry. It is not something I want to do. Who wants to go to a prison? It is something I feel I must do for the sake of my King. There is no place on earth that is not His, not the fanciest suburban church nor the darkest prison cell. If I am indeed His ambassador, I must answer when He calls and go where He sends. I will post updates here if and when that happens. I could certainly use your prayers here and I will pray for you to find those hard places with unwanted people that Jesus wants you to minister to.
Posted by Arthur Sido at 2:00 PM

Arthur, this hits very close to home. I have a 1st cousin serving life w/o the possibility of parole in a federal prison in Alabama. I used to write letters but he now has limited access to get email. We trade emails a few times a week.

Lonnie was incarcerated in 1992. His conviction was a first time offense for his involvement in a drug conspiracy ring and money laundering. He was convicted under then federal sentencing rules. From a website set up on his behalf:

"The form of drug involved, crack, played a major role in Mr. Lundy’ sentence. Congress had mandated that crack cocaine carry a 100:1 penalty over the powder form of cocaine. The unfairness of this ratio has been recognized by the current U.S. Sentencing Commission and by U.S. Senator Jeff Sessions who introduced legislation to correct and adjust the disparate sentences between powder and crack cocaine.

Lonnie’s base level offense with enhancements resulted in a “mandatory” sentence, under the then mandatory provision, of a life sentence with no opportunity for parole."

I have visited him there. You are right. It is not a pleasant experience at all. But my heart breaks for my cousin and childhood play buddy.

Les, that is terrible. I am a law and order guy but the system is terribly out of whack.