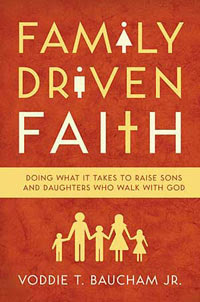 Voddie Baucham’s 2007 book, Family Drive Faith: What It Takes To Raise Sons and Daughters Who Walk With God, is somewhat controversial in the church. Not because of heretical or radical teachings but instead because it challenges one of the pillars of the modern church model: age-segregation. It is an article of faith that in order to attract people your church needs to offer a comprehensive youth ministry, nursery during “worship” and preferably children’s church so that kids get a tailored experience and more importantly don’t distract the adults. It is all part of the subcontracting culture in America that is an epidemic in the culture and doubly so in the church. The Bible gives us a different story and is quite clear that God calls on parents, specifically and especially fathers, to be the primary molder and educator of the children God has given them. Not the youth minister. Not the public school. Parents.


The fact that this is radical and controversial says a lot more about the state of the “church” than it does about Voddie’s book. I actually found his suggestions to be common sense for anyone with even a cursory understanding of parenting from a Biblical standpoint. God has given many believers children. They are both a blessing (Psalm 127) and a responsibility. The church has a role to play in helping to equip parents, especially fathers, in their calling but the church is not intended to replace fathers in this, just as the church is not intended to replace individual Christians in the work of ministry but rather to be a place of equipping and encouraging.

I was more than a bit shocked to realize that I bough Family Driven Faith in 2008 and am just now reading it!

I really appreciated Voddie’s emphasis on the importance of Christian education. Family Driven Faith is far more than a diatribe against youth ministry, it is a call to Christians to recognize that our choices in educating kids has enormous repercussions on their corresponding understanding of the world. For example Voddie hits a drum I have been beating for a long time, namely that churches should see Christian education as something that we should invest in to help parents and provide an affordable alternative to government schools…


…I am sure that a community of believers that routinely raises millions of dollars to build sanctuaries for one-day-a-week use can find a few coins to help parents give their children a Christian education. (Family Driven Faith, pg. 209)


Yes! I am frankly disgusted that parents are expected to put money in the plate for pay for a building while untold numbers of children from Christian homes can’t afford private Christian education. An education based in Biblical teaching and from an openly Christian position. In my home of Fort Wayne there is a large Christian church with a comprehensive private school. High school tuition is almost $6000 which really is that much but that works out to monthly payments of $548 which is more than most car payments and almost as much as a mortgage! That isn’t even expensive as far as private schools go.

Voddie makes a lot of excellent points but I of course didn’t agree with everything. For a book that I am mostly in agreement with, I did have some issues to quibble over and one big issue that warrants a separate post.

I think Voddie overly relies on Deuteronomy 6 as the basis for his book. Deuteronomy 6 has a specific context for Hebrew parents to remind their children of the Exodus out of Egypt and the Old Covenant promises. The concept is correct as far as parents being responsible for raising their kids, and it does correspond with New Testament teaching, but it smacked of the sort of clumsy application that gives us tithing to the local church and plaques extolling the national identity of America as “God’s people”. Another concern. Family Driven Faith can be discouraging for those who, unlike Voddie, are not able to spend most of the day working from home. I get to work from home a couple days a week plus weekends so like Voddie I am around the house the majority of the time. Most parents are not and with the ridiculously busy schedules a lot of kids have, finding the volume of time is going to be difficult. Morning prayer and devotions is going to be impossible in some cases. I don’t think Voddie at all intends an “all or nothing” approach but it can come off that way.

From a style standpoint, a lot of the material in Family Driven Faith is a rehash of stuff Voddie has written elsewhere. Many of his books sound like the same stuff reorganized and repackaged: same jokes, same quips, same stories. That is kind of petty but it bugs me and as someone who buys Voddie’s books whenever they come out I think I get to make the occasional petty stylistic gripe!

Finally the biggest flaw, and one that is almost a fatal one, in Family Drive Faith is that it doesn’t go nearly far enough, a flaw it has in common with the broader Family Integrated Church movement. Voddie is absolutely right that there is no Biblical basis for age segregation in the church but that is true not just for age segregation. Most of the arguments that Voddie makes against the youth ministry culture are as true for the rest of the traditional church as they are about age segregation! Like the magisterial reformers, Voddie only goes part of the way and in doing so misses the role that other traditions in the church have in leading to fathers that are not equipped to disciple their children and wives. Now as Voddie points out moving toward a full family integration is unlikely to happen overnight and in the same way I think that moving toward a simpler, more Biblical general ecclesiology is also not going to happen overnight. I am encouraged that many people who approach the Scriptures in a way that leads to family integration and homeschooling are also likely to eventually come to fully realized Biblical ecclesiology. It is a hard path but a necessary one.

In spite of a few concerns, Family Driven Faith is an important entry into the conversation about family and education and discipleship. I think Family Driven Faith is an important step in the right direction in spite of its flaws where church traditions are concerned. Reformation takes time and starting with the family is a great first step. Voddie is to be commended for being willing to take an unpopular stance, one that sees him regularly being misrepresented and attacked by some people who should be allies. Get Family Driven Faith. Read it. Be prepared to be challenged in some important ways!

I had to doublecheck to see if I was reading one of my own posts!

Agree, agree, agree. Also agree that authors today can be only so controversial before they get dismissed entirely. The prophets had the nation's ear whenever foes were being condemned, but when the harsh words came home to roost...

I majored in Christian Ed at Wheaton. Education programs in our churches and homes are a shambles, and the role of the youth pastor to teach parents how to disciple their own children remains a concept no one cares to listen to. I know because I've been promoting it for 20+ years.

But here's the kicker:

All that teaching is a waste...if kids do not see their parents living the Gospel. And that's where the Church 2012 is right now. You can talk about justice for the oppressed, feeding the poor, witnessing to the lost, sharing one's goods in community, submitting to the lordship of Christ in all things, but unless kids actually see it in practice in their own households, Christianity is going to be to them nothing but a set of rules made by men.