God's covenant people are an olive tree not a corn field

We seen an image of God's covenant people, especially as it pertains to those of us who are not Jewish by ancestry, as an olive tree in Paul's letter to the church in Rome. 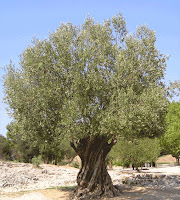 But if some of the branches were broken off, and you, although a wild olive shoot, were grafted in among the others and now share in the nourishing root of the olive tree, do not be arrogant toward the branches. If you are, remember it is not you who support the root, but the root that supports you. Then you will say, "Branches were broken off so that I might be grafted in." That is true. They were broken off because of their unbelief, but you stand fast through faith. So do not become proud, but fear. For if God did not spare the natural branches, neither will he spare you. Note then the kindness and the severity of God: severity toward those who have fallen, but God's kindness to you, provided you continue in his kindness. Otherwise you too will be cut off. And even they, if they do not continue in their unbelief, will be grafted in, for God has the power to graft them in again. For if you were cut from what is by nature a wild olive tree, and grafted, contrary to nature, into a cultivated olive tree, how much more will these, the natural branches, be grafted back into their own olive tree. (Rom 11:17-24)

Olive trees have deep roots and many branches. There are many different branches but all of them are interconnected. The branches on an olive tree are interdependent, all drawing the source of sustenance from the same root system.

Sometimes it seems that God's people are more like a corn field than an olive tree. Corn plants in a field grow alongside but compete for resources. They look identical from a distance but when you get closer there are slight variations. 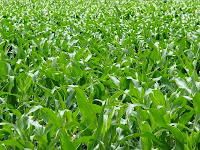 Whether it is competing for nutrients, bees to pollinate, sunlight, water, whatever, corn plants are competing with one another even though they are after the same goal: making ears of corn.

It seems that the church is like this. We all are claiming to follow Christ and seek to make disciples and teach those disciples. We also are divided up into row after row of nearly identical local churches, all in competition with one another for precious resources: people, money, facilities, influence. My corn plant/local church grabs what resources we can and make a few ears of corn. The corn plant/local church next to me does the same thing. The whole system doesn't look much like the church, much less an adoptive family.

Rows of corn plants in a field makes for good agricultural practice but not very good ecclesiology. We need to constantly remember that we are all grafted into the same olive tree.
Posted by Arthur Sido at 4:30 PM

Great analogy! Thanks for pointing out in "layman's terms" those differences. I see your point and I think you are right, the Church today resembles the corn field rather than the olive tree. Great post Arthur! :)