One of the recurring topics I have on this blog is the trait I have noticed among male liberals where they hold pretty ugly views of women that they hide under feminist rhetoric until they get the chance to unload on a "safe" target, usually a conservative woman. They also usually get a pass from other liberals because of the target of their ugliness being conservatives.

Which brings us to Harvey Weinstein, and once the initial accusations of sexual mischief started the floodgates opened. The "casting couch" idea has been a running "joke" for decades and Weinstein himself was the butt of several jokes specifically poking fun at his reputation of being a lecherous creep but he was a good liberal guy and made lots of successful films so people looked the other way. I am not going to recount the accusations but needless to say that in spite of the dozens of women that have come forward to accuse him of harassment, groping and outright sexual assault I am confident there are plenty of other women that traded their youth and sexuality for parts in Weinstein films.

It also sounds like this has been known for a long time and nobody did anything until they were forced to by the viral news story. In spite of his apparently well-known sexual proclivities as it pertains to very young starlets, Weinstein was a favorite among liberals. Along with the grotesque, stomach churning pictures of Weinstein pawing and grabbing actresses like Jennifer Lawrence and Emma Watson, there are lots of these making the rounds. 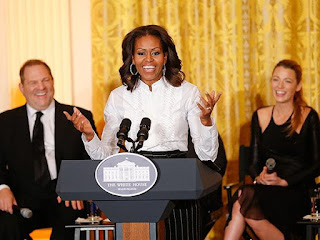 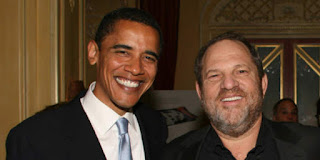 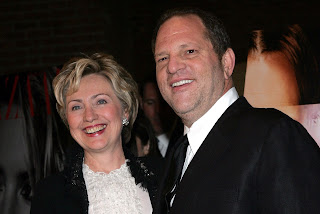 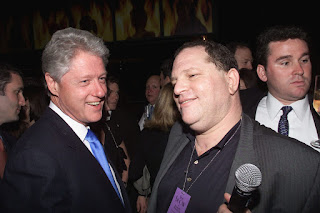 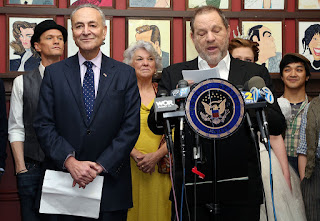 Why would self-proclaimed liberal champions of women be willing to pal around with this corpulent serial abuser? At least with Bill Clinton it is perhaps because they were kindred souls but for the others I am sure it has nothing to do with the huge amounts of money Weinstein raised for Democrats via direct donations and lavish fund-raisers. Keep in mind that these are the same sort of people who say that Donald Trump is unfit for office because of a sexist comment he made years ago but who mug for the cameras with an actual sexual abuser because he writes them checks.

But I think the bigger issue is that there simply is a different standard when it comes to liberal men versus conservative men. "You have to have sex with me in order to get this part" is OK when it is a liberal saying it but a rather dubious report of a comment by Clarence Thomas, "There's a pubic hair on my Coke can", is a disqualifier when said by a conservative. It isn't like Weinstein is alone in his misbehavior that is overlooked when you are the right kind of celebrity.

Look at some other Hollywood darlings.

Woody Allen married Soon-Yi Previn, the adopted daughter of his one time girlfriend Mia Farrow, beginning with an affair with the girl while still romantically attached to her mother and has been accused of molestation by other children. Yet Woody is still a favorite among the jet-setter crowd. Personally I never found him amusing or interesting, just mostly a self-important dork that was equally creepy.

Roman Polanski actually drugged and raped a 13 year old girl at the home of another weird cat, Jack Nicholson, and fled the U.S. in 1977. Prior to that he was in a "romantic" relationship with actress Nastassja Kinski who was under 18 at the time. Polanski would have been around 43 at the time, or almost my age. Since then he has gotten a little less creepy by marrying Emmanuelle Seigner who is a mere 33 years younger than he is. All of this time he has been living in Europe as he cannot come back to the U.S. without being arrested. That hasn't stopped him from making films fawned over by his Hollywood pals, including the overrated The Pianist which was nominated for 7 and won 3 Academy Awards, including a Best Director for Polanski. A man uses his position of power to rape one 13 year old girl and carry on a sexual relationship with another young teenage girl, and those are only the ones we know of and there are almost certainly more as his current marriage reinforces his hankering for very young women. Regardless Hollywood doesn't care, and many celebrities including female stars, pine for his return to America.

In the same way that the Left hypocritically yammers about "Black Lives" mattering when it is a politically useful black life and looks the other way when the black lives are the far more numerous lives lost to black-on-black violence and the abortion industry, so to does the Left talk a big show about caring about women and being "feminists" when they can advance their broader political agenda but not caring too much about women, sexual assault, sexual harassment, use of power by men to coerce sex out of women or outright rape them or any other form of misogyny when carried out by one of their allies. The left did all it could to keep Clarence Thomas off the Supreme Court because of the spurious accusations of Anita Hill but lionized serial adulterer and woman killer (literally) Ted Kennedy and still lauds accused rapist Bill Clinton because he is one of their own.

Don't be fooled by the rhetoric. The Left only cares about people when they are politically useful. When a woman is just a wannabe starlet desperate for her big break and offered that break by a grotesque pervert in exchange for sex, nobody cares about her. It is just the ways things are done. The same girl caught in a compromising position with a conservative though becomes a cause in and of herself.
Posted by Arthur Sido at 1:18 PM