As part of a series, in a prior post on my other blog (I am moving this series to my main blog), I took a stab at my first new nation to be formed from the dissolution of the United States, a combination of the northeastern states into an independent nation I called The Yankee States of America. 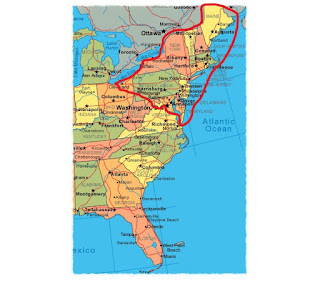 As I said in that post, that one was probably the easiest because the Northeast is so homogeneous in terms of it's political and cultural attitudes and it would even allow them to keep their bitter sportsball rivalries intact. The Y.S.A. is the cleanest and neatest of the new nations to create.

As you move away from the Northeast, things get more complicated because of the stark difference between the urban and suburban/rural areas in the rest of the country. Even seemingly monolithic California has 53 Congressmen and of those 39 are Democrats and 14 are Republicans, so over a quarter of California's delegation is Republican. But there are other considerations beyond strictly political considerations, specifically cultural connections between regions. Thus I present for your consideration.. 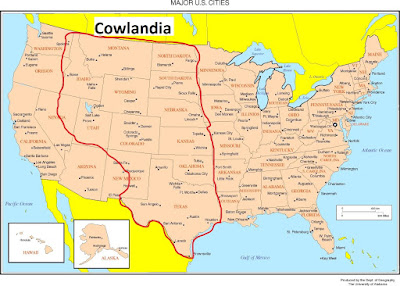 The first thing you might notice about Cowlandia is that it is HUGE in terms of land size. These 11 states, not counting the parts of states like Nevada, Washington and New Mexico, combine for over 1.1 million square miles. Since the entire U.S., counting Alaska,  is about 3.5 million square miles, Cowlandia would be almost a third of the entire U.S. landmass and at that size would be the sixth largest nation in the world in area, slightly ahead of India and well behind Russia, China, Canada, Brazil, and Australia (as the U.S. would no longer exist at number 3).

What it is not is super densely populated, unlike the YSA. The great state of Texas stands out among the rest of Cowlandia. Texas currently has two of the top ten most populous U.S. Metropolitan Areas (Dallas-Fort Worth #8 with 7 million people and Houston at #10 with 6.3 million people.). Overall the state is number two in the country in terms of population with over 27 million people, well below California's 39 million but well ahead of number 3 Florida's 20 million. However the rest of Cowlandia as a whole includes some of the least populous states in the present United States, states like Wyoming with the smallest population in the U.S. at barely half a million and both Dakotas with less than a million people each.

Cowlandia is also rich in  natural resources, from the agricultural breadbasket that extends from north to south to the oil and natural gas in Texas, Oklahoma and Wyoming, Cowlandia's strength is not in high tech but in raw materials. Texas has the second largest gross state product in the U.S. with a staggering $1,648,077,000,000 GSP. With a GSP of well over $1.6 trillion, Texas by herself would be in the top ten nations in the world in terms of GDP, just ahead of Canada, so Cowlandia as a whole would have plenty of economic strength to go it alone.

With a northern border of Canada and a souther border with Mexico plus a large Gulf of Mexico coastline, Cowlandia has lots of access to international trade. Obviously with Texas, Oklahoma, Wyoming, etc. Cowlandia has a great deal of oil, natural gas and other mineral resources plus the vast grain acreage in Kansas, Nebraska and others. A sizable amount of the beef you consume is finished out in the giant feedlots in Colorado and elsewhere in Cowlandia. Of course Cowlandia also includes a number of important parks like Glacier, Yellowstone, Rocky Mountain, Zion, and many others. But it is not all wheat and cows and parks. Cowlandia has a number of urban centers in Houston and Dallas, Salt Lake City and Denver plus a bunch of colleges and universities in Boulder, Provo, Lincoln and all across Texas, so Cowlandia would have ample access to the creative class.

What it does not have is an overabundance of fresh water and that could be a problem. Perhaps Cowlandia could trade with the yet to be revealed new home of the upper Midwest, oil for water?

Cowlandia broadly speaking is the American West. Having lived in Cheyenne, Wyoming I can tell you there is a huge difference between the West and the Midwest. People in the YSA probably assume anyone west of Pittsburgh is a redneck or cowboy or both but the Western culture is very different from other areas in the country. While South Dakota is not Texas, they are both in my opinion far more similar to one another than they are to people in Boston. While there are exceptions in urban areas and Colorado is a lot more "blue" than the rest, much of Cowlandia is deep, deep red. 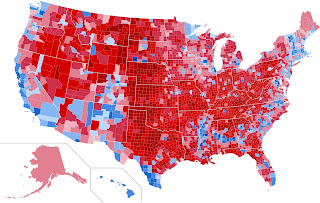 Many people who live in Cowlandia are resentful of people "back east" telling them how to manage their own lands. The fight over the reintroduction of the gray wolf a number of years ago was a perfect example. A rancher in Montana is going to have a very different understanding of the utility of bringing back an alpha predator than a wealthy urban housewife in Manhattan that contributes to the Natural Resources Defense Fund. Even Texan suburbanites are very different from people in the suburbs of Boston or Philadelphia or even places like Atlanta and Nashville.

Some other questions. Where would the capitol be? Probably in Texas, and probably somewhere like Dallas. Denver is another option as it is fairly centrally located in Cowlandia and might keep some of the power from being overly concentrated in Texas. Westerners would probably prefer a Dallas capitol to a capitol in D.C. but would like decentralization even more. What about the sizable Hispanic population? I would assume many would stay and be welcome in the new nation, many others might move to Arizona or California as I would assume that the government and culture of Cowlandia would change quite a bit. Part of dissolving the Union would be to allow enough time for people who wanted to move to do so freely before the new nations are formed.

What about the nukes? Between Strategic Air Command in Nebraska to NORAD in Colorado to the nuclear missile "farms" in the prairie states to air bases like Minot (N.D.), Malmstrom (MT) and F.E. Warren near where we lived in Cheyenne, Wyoming that house both nuclear capable B-52's and our land based nuclear strike force, Cowlandia holds a major percentage of the present U.S. nuclear deterrent. As an aside, it was kind of weird to drive around Cheyenne and see nuclear missile facilities seemingly randomly scattered around the otherwise empty prairie. Like most of the military, the nuclear forces would need to be split up. Although places like California and the YSA might not want nukes, they probably wouldn't want to give them all to new neighboring nations. A mutual defense treaty between the newly independent countries is a topic for another post.

Cowlandia for me was the second easiest new nation to carve out. From here on out it starts to get more difficult.

Email ThisBlogThis!Share to TwitterShare to FacebookShare to Pinterest
Labels: dissolving the union