Another story of fake hate crimes, this one a convergence of two of my favorite topics, bogus "hate crimes" and the state of the university system. This one occurred at tiny St. Olaf College in Minnesota. I had never heard of it before but it was all over the news because of reports of "hate crimes" on campus. At the time the reports came out, I instinctively figured it was bogus, in part because so many of these claims are bogus but also because it just seemed so clumsy and ridiculous. A type-written note on a full sheet of paper stuck under a windshield? Yeah, that is how modern "White supremacists" and the alt-right operate, they never use that new fangled internet or anything.

As soon as the "hate crimes" came out, so did the protests which coincidently included a whole list of demands to the administration of St. Olaf, demands that they of course acquiesced to. You can read the demands at the very comprehensive web page the protesters put up, A Collective For Change On The Hill. It is pretty boilerplate SJW nonsense: "Our mission is to hold the administration and students of St. Olaf College accountable for the institutionalized racism that is embedded within the structures of this campus." Holding them accountable is code for "making them give us stuff we want". Here is a sampling, as a side note the word "demand" appears 54 times in their manifesto:


A. We demand the removal of Arne Christenson from the Advisory Board of The Institute for Freedom & Community. Given Mr. Christenson’s political views and values as a Christian Zionist, St. Olaf College risks his influence upon the speakers brought to the school, the educational offerings, faculty development workshops, and scholarships sanctioned by the Institute through financial means.

Mr. Arneson's crime is that he is a Christian, a White guy and supports Israel a little too much. So he must be removed!


A. We demand that the College composes and commits to a strategic 10-year plan by the end of the Fall of 2017, that will recruit, train, and retain, new hires to increase the percentage of Indigenous, Black/African-American, Latinx-American, Asian-American, Multiracial, Queer, Female, and international faculty and staff members that adequately represent the student body, especially considering the rising population of black and brown students both domestic and international at this institution.

St. Olaf is allegedly a school in the "Lutheran tradition" with tuition north of $44,000 grand a year. Clearly what every Lutheran school needs is more "Queer" faculty and staff.


A. We demand that St. Olaf College hire persons of color as a counselor and nutritionists for the Boe House Counseling Center, and health professional for the Health Center immediately for the wellbeing and mental health of marginalized students. This counselor will be hired additional to the current staff. We demand a plan for the hiring process to be established by Fall 2017, as part of Article II, Section A.

How can "persons of color" be expected to learn without PoC as nutritionists?! There are lots of other similarly silly demands, many of which are nothing more than demands for more scholarships for only students with the right skin color or sexual preferences and more diversity hires based on the same "qualifications". One was a little more troubling:


A. We demand that if a student is requesting to be reassigned a new roommate due to discrimination against their race, religion, gender and sexuality, such requests must be dealt with and responded to immediately. The perpetrator must then be removed from the room/house to not inconvenience the victim further.

So if you don't like your White, Christian and/or sexually normal room-mate, they are to be removed "immediately" to avoid "inconvenience" to the "victim". This is similar to the presumption of guilt we see in the campus "sexual assault" system.

Of course the "hate crime" was shown to be a hoax, the fake hate crime somewhat surprisingly making the pages of the Washington Post, A racist note sparked protests at a Minnesota college. The school now says the message was fake.


In an email sent to the campus community Wednesday, St. Olaf College President David R. Anderson revealed that investigators “confronted a person of interest” and confirmed that the threatening note was “not a genuine threat.”...Anderson went on to say that federal privacy laws prohibit the college from disclosing the identity of the note’s author.

You can absolutely be sure that if they had found a White student that they believed was responsible, they would have identified them. From what I can gather, nothing is going to be done from a disciplinary standpoint nor from a legal one. I also am pretty sure that the ridiculous demands cooked up by the "protestors" will still be met. I found it interesting that these demands were based at least in part on the demands from another Lutheran school, which if nothing else gives the impression that these boilerplate demands coupled with the apparent lack of consequences for the perpetrator of this hoax is part of an intentional process to use false charges to push through ever more extreme measures that benefit only a small number of radical activists. 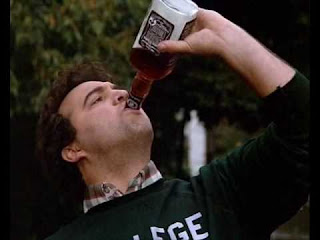 I (only partly joking) posed this question on Facebook: "Is it too late to burn the entire public education system from kindergarten to the post-graduate university level to the ground, salt the earth and start all over?" Our educational system is irreparably broken. We have too many kids going to college that have no business being there, getting too many meaningless degrees that water down the value a college degree should carry and far too often not even getting a degree at all; our educational system from top to bottom is bloated and far too expensive, leaving communities with huge bills for K-12 and getting marginal returns, and college students left with a trillion dollars in student loan debt; and worst of all these "educational" institutions have devolved into very expensive re-education camps pushing the worst sorts of radical nonsense, sexual perversion and ironically discouraging any sort of critical thinking. Still we hear over and over again that we need to "invest" in education but we are absolutely not allowed to critique  the results we get. No matter how much we spend, we need to spend more. The beneficiaries of this mindset are the activists and the educational establishment who get cushy, high paid jobs (not talking about the run of the mill public school teacher here, heaven forbid we even appear to criticize them). The victims are the kids, kids who get a mediocre education, who are inundated with harmful nonsense in place of actual learning and who get to foot the bill of the debt they personally will incur and that is incurred on their behalf in our national debt. Of course society as a whole is also victimized by being forced to pay for this garbage with the threat that not agreeing to participate is to shut the door on any chance for a prosperous life for your kids.

The bogus "hate crime" incident at St. Olaf is just the latest peek behind the curtain of the educational establishment, a world many adults see little of but are told that they are duty bound to put their children into and to of course pay whatever is demanded of them. Under the cover of "it's for the good of the children" we have collectively allowed a small group of radicals to fleece this nation for decades without check and without much scrutiny. A fraternity at The University of Chicago was called racist because of an ironic construction themed party that sort of and intentionally coincided with Cinco de Mayo. We even have kids being suspended from school for "liking", on their own computer, on their own time, off school grounds, a social media post deemed "racist". I am glad that people are starting to wake up but a lot more of us need to wake up and soon because we cannot afford what it costs to feed the education beast and our society cannot afford another generation of kids who come out on the other end intellectually disfigured.
Posted by Arthur Sido at 9:32 AM