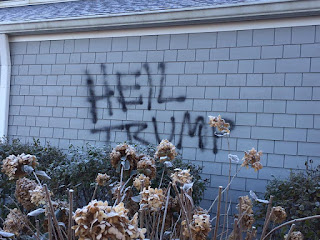 I noted last week on Facebook yet another fake hate crime, a hoax committed by a person irrationally terrified of a Trump presidency or perhaps just mad that Hillary didn't win. If you recall, the media was awash in stories of "hate crimes" following the election and in typical hostile opposition media fashion they dutifully reported on each and every one as if it were of course a real story. The media assumed these were accurate stories because they also bought into the narrative that Trump won because of Russian meddling, the alt-right, the KKK, misogyny, the FBI, something other than their preferred candidate being a terrible human being who ran a terrible campaign so given that they anticipated "hate crimes" would follow Trump's election it only made sense that what they were expecting anyway happened and would be accepted without hesitation or investigation.

You can be forgiven for missing one story of a swastika, "Heil Trump" and "fag church" being spray painted on an Episcopal church in Indiana. I don't really remember it even though it happened in my state because the deluge of (now proven fake) news stories was so overwhelming. Shockingly, SHOCKINGLY I say!, it turns out to be a fake story yet again, with the added twist that the homosexual church organist who reported the vandalism was the actual perpetrator. Stunning, I know. Once I recovered from swooning in shock, I wrote this on Facebook:


Remember all of those hates crimes that followed Trump's win by energized hate groups? Yeah, it turns out that over and over those were actually committed by people trying to make it *seem* like Trump supporters were actually the deplorable people Hillary claimed they were. In this case a homosexual "church" organist spray painted the church he attended and was employed by with "Heil Trump" and "Fag Church" and then called the lady "pastor" to report the hate crime. Months of investigation, who knows how much money in expenses, a community in fear that turned out yet again to be false.

Basically he was irrationally afraid because the most pro-gay person ever elected won and he didn't think other people were sufficiently afraid so he faked a crime to try to make them properly afraid of something that was false in the first place. This being Bloomington, In, home of IU, he got slapped with a misdemeanor. As a bonus you can read what the lady "bishop" said about the whole fiasco, it is about as nonsensical and theologically illiterate as you might expect from a woman who styles herself a Bishop.

“The Brown County Prosecutor’s Office believes that, although this incident targeted one of our county’s churches and thrust our community in a negative light on a national stage, this was not a hate crime,” Adams said in a press release."

I disagree. A crime based on hate WAS committed, a crime against law abiding American citizens who voted for Trump who were slandered by this man. He ought to issue an apology to President Trump directly and to the people of his community, state and nation for his false and slanderous hate crime against people he disagreed with politically.

So why did we see all of this going on? What in the world is wrong with people that it seemed like a rational act to scratch themselves with a safety pin and blame Trump supporters or set fire to their own church like the pre-election event in Mississippi or to claim that they were being threatened with being set on fire for wearing a hijab or spray painting clumsy "hate speech" on their own church where they were employed? We were warned (by the Hillary sold out media) that if Clinton won there would be violent incidents from the "right-wing" but the opposite ended up to be true and the people committing the acts were Leftists, not radical right-wing extremists.

Partly it is because the entire Clinton campaign was run on fear. This was a charge made about Trump's campaign but the real fear mongering came from Clinton. If you vote for Trump all of these terrible things will happen! I can't ever remember a campaign where the basic appeal from one side was "I am not that guy". When Trump won, it was necessary for people to see these things come to light I guess. There is a bigger issue though, a bigger issue that impacts all of us and it extends far beyond politics.

We live in a post-truth society, one where we have moved past the point of thinking that ultimate truth is unknowable to one where there is no such thing as truth in the first place. Truth as something to be pursued has been replaced by The Narrative© and The Narrative© is all that matters. If the narrative is that a win by Trump will embolden the White supremacists and neo-Nazis and xenophobic anti-immigrant hordes, then by golly that is what is going to happen. If it doesn't happen naturally, we will just help it along because the spice must flow The Narrative© must advance. Even in the aftermath of seeing that this was just another false flag bogus hate crime, the Left still can't help itself but still trying to spin the story. Look at the statement from the "Bishop" of the Indianapolis diocese, The Right Reverend Jennifer Baskerville-Burrows:


“Many people in our country, particularly members of sexual, religious and racial minorities, have well-founded reasons to be fearful in these difficult times, but this terrible situation illustrates why we must resist the temptation to play to those fears,” she said.

Notice that she has to slip in that homosexuals have every right to be afraid in these "difficult times". The reality is that the only reason they have anything to fear is that they have been fed a steady diet of fake "hate crimes" from the very people who keep telling them to be afraid. You aren't afraid enough and I think you should be afraid in spite of the lack of any evidence so I will make up some reasons for you to be afraid. For your own good, of course. The media, leftist political groups, even many "progressive" pseudo-Christian religious groups, are perfectly happy and feel completely justified in pushing their agenda, regardless if the facts support their claims. Peaceful attendees at Trump events were attacked by radical leftists again and again, the media was silent. Peaceful attendees at talks on university campuses by speakers from Milo to Charles Murray were attacked and the media spins it as "clashes" between Trump supporters and "protesters". The only "clashes" were one-sided attacks where typically (and this is verifiable even through the hostile media) a Trump supporter or someone else on the Right was attacked without provocation, usually an unarmed individual attacked by multiple armed assailants. When the Right finally organized and fought back, with pretty disastrous results for the ironically named "antifa" the media spin still made it look like skinheads were just beating up innocent beatniks playing their drums and smoking weed.

What we are seeing across the Western world and particularly here in America is a backlash against the carefully controlled "media" that has told Americans not just what to think but what topics they were allowed to think about for much of my life. The mainstream media is losing influence quickly, far more quickly than I believe even they realize as they largely measure their influence on outdated metrics like subscription numbers and ad revenue. Younger people on the Left moved to the late night "comedian" "news" like Jon Stewart, Colbert and Maher as well as far-left webzines like Vox and the HuffPo. While many older people on the Right rely a lot on Fox News, at least for now, and talk radio, younger people on the Right are more likely to use Twitter and Youtube to get information and form opinions.

The elite in this country keep telling us that truth is subjective and now they are reaping what they have sown. They scream that they are the only "true news" and that other sources, which are invariably conservative/right-wing in orientation, are often "fake news". The same people who complain about Breitbart being biased seem to have no issue with Huffington Post. The elites have created a counter-narrative to the admittedly sometimes not well thought out narrative of a "Judeo-Christian" moral narrative that proposes that there is no truth at all. It has worked a little too well because now we have an environment where nothing is true and where people feel justified, over and over again, to stage a fake hate crime to push The Narrative© and it turns out a lot of people will at least tacitly defend them because even though it was a lie, it could have happened, based on a rather warped understanding of the situation in America. When someone spray paints his own church with graffiti which leads to a lot of fear, a public outpouring of support and costs the tax-payers untold amounts of money and manhours (oops, that is patriarchal!) of police investigations that could have been spent on real crimes and still the "Bishop" feels the need to slip in an excuse for an outrageous act, it tells you where we are as a country.

The church, by which I mean the actual church which precludes people like "The Right Reverend Jennifer Baskerville-Burrows", needs to stand for the objective truth of Scripture. I am pretty confident that many people don't like the wishy-washy, nothing is true, only The Narrative© matters nonsense. They are looking for an unapologetic stance for truth in matters of faith as well as in other areas. Not everyone of course and many people don't even realize what they are missing thanks to 17 years in the indoctrination centers/re-education camps we call our educational system. Still, the church must not yield to the temptation to reject absolute, objective truth because when we do, when we bend to the prevailing winds of the culture, we no longer have anything to say to the world.

We have the truth. Others may disagree that it is true but they should never, ever be confused or uncertain that we declare it to be truth, without compromise or apology. If nothing is true then of course nothing is false. Christians know that the reality is quite different. Jesus Christ is truth incarnate and the truth of Christ will set you free. That is still the message our world needs to hear.
Posted by Arthur Sido at 11:54 AM