In Defense Of Creeds And Confessions (Sort Of) 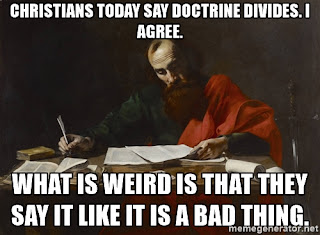 I made this meme a while back for lulz but I think the message is still one that deserves some support.

There is a popular saying among groovy Christians and others that "doctrine divides". I agree and that is why I encourage the church to be more engaged in doctrinal study. One of the pressing needs of the day is to divide the church to winnow out the false teachers, those who are engaged in pernicious and unrepentant sin (1 Cor 5:9-13) and those who approve of that which God condemns (Rom 1:32). Thanks in part to our religious culture, our lack of persecution and the religious-industrial complex that has made pseudo-Christianity a money making machine with few peers, the religious landscape of America is awash in wolves feeding on the sheep, false prophets cashing big checks and flying in private jets and untold millions of Christians and others who are functionally theologically illiterate. We have tried a lowest common denominator "Christianity". It gave us Joel Osteen and Paula White, it gave us The Shack and Rachel Held Evans. It gave us a divorced, openly and wantonly homosexual Episcopal "bishop". Even beyond the obvious, popular level false teachers there are just so many Christians who have Bibles, go to church, attend Sunday school and listen to sermons and are still drinking milk instead of eating meat. That has got to change. Milk drinking Christians are fine when they are new but milk drinking 20 years after being born-again Christians do not have the grounding to stand firm in the faith in the days to come.

So what does that have to do with creeds and confessions? I have been kind of down on them in the past and I still think there is a danger in creating confessions that are intended to create an "us versus them" mentality where confessions are more like marketing material (come for the youth program, stay for the sacraments!) than sober reflections on theology. On the other hand I think that there is more to Christian discipleship than the plucky Christian with a Bible in hand taking on the world single-handedly. If anything we need more teaching aids, not fewer, and where confessions and creeds aid our study of the Bible and our understanding of the faith, I am all for them.

As Tom Ascol of Founders Ministries pointed out in a recent article, the solid creeds state right up front that the Bible is our sole authoritative source for faith and practice. The Second London Baptist Confession, which I am largely in agreement with, states right at the beginning:

1. The Holy Scriptures are the only sufficient, certain, and infallible standard of all saving knowledge, faith, and obedience.

People who understand the creeds understand that. The Bible is the standard, not the creeds or confessions. The creeds and confessions are teaching aids, useful for helping us to understand what is in the Bible and how it ties together, and are the accumulated witness of the men of the past and we today stand upon their shoulders. We should never take anything at face value without studying it for ourselves but we also don't have to recreate the wheel over and over. The Bible covers thousands of years of redemptive history with thousands of people making an appearance and hundreds of crucial themes woven together. I don't know about you but I certainly need help sometimes in bringing that all together.

The vast majority of the New Testament, especially the post-Gospel epistles and letters, is doctrinal teaching. Paul especially takes great pains to flesh out the Gospel for his readers. Paul didn't simply chuck a collection of the Gospels at the local churches he planted and tell them "Go for it and y'all have a good day!". No, he took the time to help them to understand what happened, why it happened, what it means for them and what they should do in response. This is the teaching ministry of the church, helping Christians move beyond the milk stage and into the meat stage, aiding the brethren in becoming approved workmen, equipping the saints for the work of ministry (Ephesians 4:12). When the early church was said to be devoting itself to the apostles' teaching (Acts 2:42), do you think they just read the Bible (that they didn't have yet) over and over? Or did the apostles themselves help people to understand the Scriptures and to explain the Gospel and the ramifications of the resurrection?

Most local fellowship feature some sort of time of "preaching" via sermon, more properly called teaching, and Sunday school. What are those times of teaching but more learned, mature men helping the less mature and even the equally mature, to dig deeper into the Scriptures, see how they fit together and aid us in applying them? That is precisely what the confessions properly used should do. When I read the confessions on a certain topic or refer to a commentary or read a book by a trusted author, I do so with my Bible open but the reason I refer to them is to help me see things that I might have missed. I am not so arrogant as to think that I can read a verse and understand all there is to know about it just based on my own comprehension. I don't speak or read the original languages so I need help there understanding the nuances that might get missed in the translation process. I am not an expert on the ancient world so having some cultural context helps. I always appreciate it when teachers who are wiser than I help me to connect the dots in the grand revealing of the history of salvation.

It sometimes seems as if there is some sort of aversion to anything written on paper other than a Bible. That is mostly an overreaction against perceived and often real abuses of the creeds and confessions but the misuse or abuse of something by a few is not grounds to dismiss that thing entirely. Yes, some Christians and even some entire denominations, are hyper-creedal. When faced with a question they run to the Westminster Confession or the Book of Concord to see what it says rather than going to Scripture and using the confessions to help aid in their understanding. That is unhealthy but it is not an excuse to jettison the accumulated wisdom of hundreds of years from men who were towering intellects. Some people drive their cars irresponsibly and cause accidents but that doesn't mean we should stop using cars. The abuse by some of something good doesn't negate it's value to the rest of us. An overly intellectual faith is unhealthy but the proper response is not an anti-intellectualism but rather a robust, practical, Spirit-driven, Scripture-first intellectualism. I commented the other evening when we were talking about this passage in Acts...

Now when they saw the boldness of Peter and John, and perceived that they were uneducated, common men, they were astonished. And they recognized that they had been with Jesus. (Acts 4:13)

...that there is a difference between not being educated and being ignorant. I obviously reject the idea that elders/pastors need a seminary education to qualify for that calling in the church but I don't reject the value of formal education. Without scholars we wouldn't have the Bible in English and would remain captive to the whims of human "priests". I appreciate the work and teaching of men like Albert Mohler and John Piper, Don Carson and Stanley Hauerwas. I don't discount what they have to say because they are well educated men and hopefully I don't give them more credence than they deserve. I am just someone who is hungry to understand and apply the teachings of Jesus and His apostles and I want as many tools at my disposal as I can get. That is all creeds and confessions are, tools in our tool chest, that help us to pull together the redemptive history of the Bible. Maybe you can build a house with nothing but a single hammer but for the rest of us we need all the tools we can get.
Posted by Arthur Sido at 1:33 PM