Then the LORD God said, "It is not good that the man should be alone; I will make him a helper fit for him." Now out of the ground the LORD God had formed every beast of the field and every bird of the heavens and brought them to the man to see what he would call them. And whatever the man called every living creature, that was its name. The man gave names to all livestock and to the birds of the heavens and to every beast of the field. But for Adam there was not found a helper fit for him. So the LORD God caused a deep sleep to fall upon the man, and while he slept took one of his ribs and closed up its place with flesh. And the rib that the LORD God had taken from the man he made into a woman and brought her to the man. Then the man said, "This at last is bone of my bones and flesh of my flesh; she shall be called Woman, because she was taken out of Man." Therefore a man shall leave his father and his mother and hold fast to his wife, and they shall become one flesh. Genesis 2:18-24 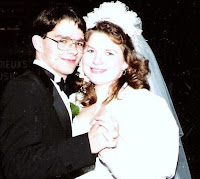 Today my wife and I celebrate 25 years of marriage, two and a half decades, one quarter of a century. I was 20 when we were married and 16 when we started dating seriously so in my 45 years of life something like 2/3 has been with my wife. I don't really know what life would look like without her and hopefully I won't find out for a very long time, if ever.

I didn't know what it meant to be married when we took our vows. Sure I knew that I loved her and wanted to be with her for the rest of my life but I didn't know we would move so often and how hard that would be for her or that we would have eight kids or the rough times and all of the really good times, the times of hurt and the times of laughter. I didn't really know how different we would both be when we were middle-aged and that how different we are now from where we were is because we grew up in adulthood together. It has rarely been easy but it has always been a blessing and has usually been a lot of fun. 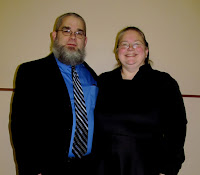 No truer words came from the mouth of God than it is not good for man to be alone. I am so grateful for the helper he placed in my life, my best friend, the one who listens to me raving and ranting sometimes, the one who console me and encourages me and sometimes rebukes me when necessary. She is exactly what I need and I am confident that her being in my life is no accident or mere chance. Second only to the gift of faith and the forgiveness of my sins, I am grateful to nothing more than the wife God gave me and who He continues to sustain. Thank you Lord. I love you Eva!
Posted by Arthur Sido at 7:18 AM

What happened to your mustache?

I shave it off now and then to better blend in with the native population.