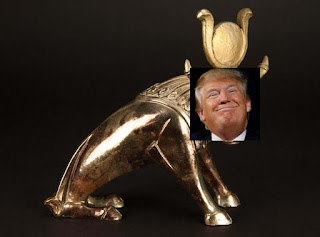 He took the candidate that they had elected and burned it with fire and ground it to powder and scattered it on the water and made the people of drink it. And Moses said to Aaron, "What did this people do to you that you have brought such a great sin upon them?" And Aaron said, "Let not the anger of my lord burn hot. You know the people, that they are set on evil. For they said to me, 'Find us a Presidential candidate who can beat Hillary. As for this Moses, the man who brought us up out of the , we do not know what has become of him.' So I said to them, 'Give us lots of "conservative" political candidates to choose from and we will choose a Presidential candidate from among them and he will save us' So they gave them to me, and I threw them all into the fire, and out came Donald Trump."

Exodus 32:20-24, you know, if the Israelite's were American evangelicals

The evangelical ship in this country has been sinking for a long time, which is fine because it has mostly been sailing in circles for decades and inviting anyone who wants on board to join our little club. This weekend the sinking ship got torpedoed, set on fire and crushed about the mid-ship by the kraken. Many people are finally manning the lifeboats and fleeing the S.S. Donald Trump Is Bad But Not As Bad As Hillary but it is way too late. Nevertheless many others are shouting that all is well.

So there is a rather desperate narrative going around this weekend from some people. Here it goes.

There are only two choices Christians have:

One, vote for Donald Trump to preserve religious liberty, save the Supreme Court and preserve America itself.

We are nearly two thousand years from the Resurrection.

We are almost 500 years from the start of the Reformation.

In most of that time the church has had very little civic control and even less religious liberty. In fact for much of the first 1500 years of Christian history the state and a false religion actively stomped out anyone who actually expressed the Gospel.

If you are so blinded that you cannot imagine how the church can survive and be a prophetic witness to the world without putting our support behind a politician, that is your problem, not mine. It is frankly ignorant of the doctrine of sin, it is tragically ignorant of the reality of human nature and woefully ignorant of Christian history.

The church didn't start in 1776. The public Gospel witness did not first occur when the Bill of Rights was ratified. For those who think that we cannot survive unless the Constitution stays intact and that can only happen if Trump is elected I would first point to something James White wrote on Facebook:

6. Stop fantasizing about the SCOTUS. One word: Obergefell, and that WITH Scalia. That ship has sailed, it is over the horizon. See point 3. Further, the doe-eyed optimism of my fellow Christians that a man like DJT, who has no earthly concept of what “trustworthiness” means, and has lived his life violating covenants and promises (ask his wives and the married women he seduced, proudly), would actually go to the mat to push through even semi-meaningful judicial nominees is further evidence that bearing the name “Christian” does not necessarily endow you with common sense.

Yes to that. Second, I would point out that the Constitution of the United States has been a dead, empty series of words since early in the 20th century and isn't coming back. This nation has gone deep into the desert with no water. It isn't going to survive, at least not in a recognizable sense. We live in a functional totalitarian state, a Bureautocracy controlled by un-elected bureaucrats, self-appointed political elites, the revolving door of big business/big government and an out of control judiciary.

So. What is the church going to do? Continue to support increasingly disgusting people in the certain vain hope that eventually we will stop getting used like whores? Will we bemoan our lack of political power and close up shop?

I don't know about the rest of the church but I do know about me. I am not going to going into mourning if Donald Trump doesn't "win". I am going to keep speaking out, I am going to keep doing what I can to carry out the mission God gave to His Church, not the United States, not the Republican Party, namely the carrying forth of the message of the Kingdom and the Gospel of Jesus Christ. I will do so if it costs me dearly, if it means being shunned by the world, if it means losing jobs, if it means imprisonment, if it means death.

There are two certainties for November. Donald Trump is probably not going to win. Even if he does things are not going to change. Faced with that harsh reality, what are we going to do? What are you going to do?
Posted by Arthur Sido at 11:36 AM

But let's go even further shall we...

When the influence of Greek philosophy, paganism and Gnosticism became manifest in the doctrines and traditions of early Christianity those Christians who knew better didn't close up shop and quit.

There has always been a remnant of Christians ordained by Yahweh who will obediently follow His commands until the Messiah returns.