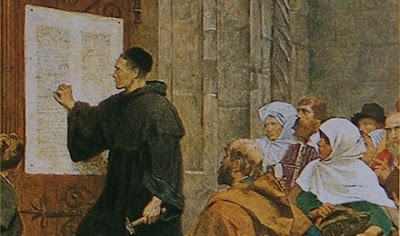 Good All Hallows Eve to you and happy Reformation Day! We stand today 499 years after the seemingly innocuous event that started a chain reaction across the world and began the arduous and I would say incomplete work of restoring the Gospel to the light of day. With October 31st, 2017 looming as the 500 year anniversary of the events of that final day of October, 1517 I expect to hear a lot over the next twelve months about Luther and about the Reformation in general. I think this is good and necessary and even desperately needed. While in the past few years I have focused on the faults of the Reformation on Reformation Day, the general failure to reform the church and the often brutal response of the magisterial Reformers toward the radical Reformers, better known as the Anabaptists, and others who didn't walk in lock-step with the magisterial Reformer's teachings. This year I am more interested in just being thankful for the brave men, men who often paid with their lives, who stood boldly in the face of man-made tyranny dressed up in pseudo-Christian religious garb. I believe God raised these flawed men up for the purpose of proclaiming the Gospel of His Son and in doing so bringing honor and glory to His name.

Lest we forget, what is taught from pulpits and books and in Sunday school classrooms across the Christian world would have been dangerous in the extreme to utter when Luther was alive and many, many Christians were martyred in those days by Roman Catholic authorities who burned alive and otherwise tortured and murdered Christians with the approval of the charlatans who blasphemously declared themselves the Vicar of Christ and the Holy Father. To do what Luther and others did, Calvin and Zwingli, Grebel and Sattler, was to invite torture and death and they are braver men than what you find today.

We live in an era that is increasingly similar to the early days of the 16th century. While Rome still teaches false doctrine, fewer and fewer people care what the "Bishop of Rome" has to say on issues of theology unless he is spouting off bad economics. That is especially true for many or even most Roman Catholics. Today the new false religion is headed by a priestly caste made up of cultural opinion makers and illiberal academics. People are more likely to form an opinion based on a tweet from Kim Kardashian than a well reasoned argument from a theologian. Most quarters of what was considered the church in America are folding up like a cheap umbrella. Many who have grown influential and wealthy from pumping out vacuous religious books and talks full of empty platitudes are seeing the religious gravy train coming off the rails and are jettisoning any hint of that embarrassing Biblical orthodoxy like sailors on a sinking ship (I know I am mixing my metaphors there).

We need men like Luther today, bold men with conviction who trust in God and in His Holy Scriptures. The clowns, showmen and huckster who populate so many pulpits in this land need to be called out as the wolves they are, even if they are wolves with million dollar smiles and impeccably tailored suits (or skinny jeans and v-neck t-shirts). Most importantly we need more men who are not Luthers, larger than life figures but instead are simple men of faith to lead our churches and our families. The Kingdom needs bold men of faith locally as well as globally. Men who humbly open God's Word in out of the way places are just as important as men with a national platform to speak.

So to all my Christians brothers and sisters, happy Reformation Day!
Posted by Arthur Sido at 8:00 AM

Email ThisBlogThis!Share to TwitterShare to FacebookShare to Pinterest
Labels: reformation day, The Reformation