Not A Compliment To Complementarians

Desiring God almost always posts articles that are useful and edifying. A recent post on the new female mixed martial arts champion, Holly Holm, who defeated the oft vulgar former champ and media darling Ronda Rousey was decidedly neither. Adam Viramontes, who apparently knows Ms. Holm, writes a glowing article for Desiring God, A New Kind Of Champion, extolling her virtues and comparing her to Jesus Christ at the end of his article. It was obviously a questionable article given the disclaimer reproduced below:

Editor’s note: Christians disagree about whether men and women should engage in sports whose aim is to wound or hurt the other person. This is true for both men’s and women’s sports. When women are involved, the issues are compounded by the question of how God has designed for women to express their womanhood. We affirm the humility praised in this article, but would want our readers to think deeply, carefully, and biblically about the wider moral issues of the sport of ultimate fighting.

I have to question the wisdom of publishing a piece that has to make that sort of disclaimer. Desiring God is a resource I heartily recommend to anyone, wherever they may be in their Christian walk and John Piper is one of my favorite teachers but an article singing  the praises of a sporting event one step removed from mud wrestling makes me question who is running the show there. Especially since Desiring God and Piper are some of the very best apologists for Biblical gender roles. It is jarring and unhelpful. I can't imagine John Piper sitting around with some dudes and cheering on two women battering each other. 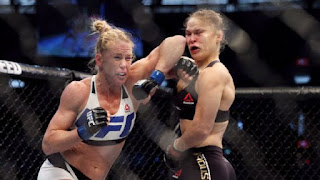 I pull no punches (pun intended) when it comes to my revulsion for mixed martial arts. It is less a sport than it is a glorified bar fight. A "sport" where the entire point is to hurt someone is a bloodsport more akin to gladiatorial games than it is to an actual sport. People get hurt in football, hockey and baseball, and the violence inherent in hockey and football is a large part of why I don't follow sports anymore, but the people getting hurt is for the most part secondary to a primary objective; scoring a goal or keeping someone else from scoring a goal, moving the ball forward toward the other team's goal line or stopping the other team from advancing toward your goal line. In MMA hurting someone else is the entire point, hurting them enough that they are forced to submit or cannot get back up. It takes the already brutal sport of boxing to the next level by adding kicks and grappling and like boxing usually features the victor standing bruised and bloodied after pummeling his or her opponent.

I am not terribly shocked by the popularity of MMA fighting. After all our entire culture is circling the drain and it only makes sense to provide ever more violent forms of entertainment to distract the masses. What is troubling is the number of Christians who are devout fans of this bloodshed. Stemming from the confused "manliness" of the Mark Driscoll variety that reflects the culture rather than the Gospel, there is something that is just wrong that Christians who were singing praises to the Prince of Peace and being thankful for His shed blood on Sunday morning are the same as those who were screaming for blood to be shed for their entertainment on Friday night. Should Christians be so enamored of these forms of stylized combat? I think that question is clear enough to answer itself. I have written before and plan to continue to do so regarding the cultural obsession so many Christians have with sports. When you combine that Kingdom smothering obsession with a gladiatorial bloodsport you have very little room left for the Gospel.

Now, when you add the fact that this article from Desiring God is about two women beating each other up to sate the blood thirstiness of men? That takes it to a whole new, perverse and disgusting level. I contend that a man hitting a woman is one of the most cowardly acts that any man can do as most men are bigger and stronger than women. Right behind that has to be men who take deviant pleasure from women beating each other up. It isn't about athletics just like Playboy was never really about the articles. There is a reason no one wants to watch women engaged in Olympic style wrestling, it isn't nearly exciting enough because the excitement is derived from the violence. I am of course not drawing a moral equivalence between a man beating a woman or suggesting that all male fans of female mixed martial arts are closet abusers of women. I am however saying that the impulse for a man to watch two women fighting each other for his entertainment, the bloodier the better, is drawn from the most base elements of unregenerate human nature, the same nature that caused Cain to rise up and slay his brother.

Another element at play here is the juxtaposition of female athletes and exploitative sexuality. It is just a given that women athletes have to show a little skin to get interest from male viewers. The Rousey-Holm fight featured two women in the equivalent of sports bras and skin tight shorts pummeling each other. Beach volleyball, an Olympic sport, apparently can't be played unless the women are wearing next to nothing. Even at the high school level teen girls must wear tiny shorts or they can't set, serve and spike. Women track stars run in very little as well. On and on. In an effort to overcome the huge differential in popularity between women's sports and men's, women including some of the very youngest, are exploited for their sexuality as well as for their athleticism. If you put the women playing beach volleyball in the Olympics in baggy shorts and t-shirts, what do you think happens to viewership? Even Sports Illustrated, an icon in sports journalism, feels the need to publish the hugely popular swimsuit edition even though last time I checked posing in a swimsuit so tiny that you couldn't perform even the most rudimentary athletic act doesn't qualify as a sport. This is true of all entertainment. Young female singers often vamp it up trying to make their mark. If Miley Cyrus wasn't constantly committing ever more depraved acts, would anyone care about her? How many young female actresses with great careers are convinced that they have to go topless in a movie to show how "grown up" and "serious" they are, making many women who are fine actresses into little more than highly paid strippers?

Christians, especially Christian men, need to be very cautious about their entertainment choices and choosing to watch women trying to hurt each other to assuage your own dark desires is not markedly safer than watching soft core pornography. I am sure that analogy will rub some the wrong way but so be it. I find women's MMA to be vulgar, degrading to women and counter-Kingdom. Many disagree and that is fine but we ought to take seriously the caution raised by the editors and think through the choice of entertainment that glorifies women doing to each other what a man doing the same would lead to his arrest. I think that Desiring God should have taken their own advice and not published this essay in the first place.
Posted by Arthur Sido at 10:49 AM

I am totally disgusted by any of this violence under the guise of "sport". By the same token, I cannot but wonder about the minds of people who would salivate over, and excitedly watch such performances.

And we wonder why our young are acting out the very same stuff! Apart from the spiritual implications,it is setting the agenda for much similar brutalizing behaviour in society. Forget the nonsense about evolution, this is DEVOLUTION!

Amen to that John, our culture is sinking in the cesspool deeper by the minute. We are not far off from a high tech late Roman Empire.