Governing By Torches and Pitchforks

In the least surprising news story of the day, the president of the university of Missouri was forced to step down after what can only be described as adults acting like toddlers, kicking their feet and holding their breath. His crime? Apparently not being sufficiently obsequious to suit black students on campus after a couple of alleged incidents that made the padded room safety of a modern university campus "unsafe".


The protests began after the student government president, who is black, said in September that people in a passing pickup truck shouted racial slurs at him. In early October, members of a black student organization said slurs were hurled at them by an apparently drunken white student. Recently, a swastika drawn in human feces was found in a dormitory bathroom.

More recently, two trucks flying Confederate flags drove past a site where 150 students had gathered to protest on Sunday, a move some saw as an attempt at intimidation. One of the participants, Abigail Hollis, a black undergraduate, said the campus is "unhealthy and unsafe for us."

So a couple of people in separate incidents used a racial slur, one being a student who is apparently no longer at Mizzou. The response from university President Tom Wolfe was considered insufficiently fawning and students began to protest by raising a ruckus, players on the football team threatening to sit out (which given the awful record of said team in 2015 isn't much of a threat) and even one winner of the Overreaction Of The Year Award, a hunger strike. Wolfe resigned in the face of, in his words and I believe correct ones, shouting and intimidation from a small, vocal group. 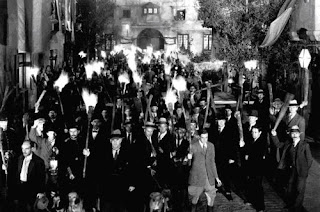 The incidents described, which seem pretty random and unrelated to a wielder of white privilege like myself, are unfortunate and ugly but in the real world you have to deal with people who are jerks. You can't shut down society every time your wittle feelings get bruised. Instead of teaching university students to survive and thrive in the real world, the constant coddling of students to the point of giving them places to hide to avoid having the leftist ideology they are fed being challenged. I don't know much about now former President Wolfe but he made two big mistakes. The first was being born a white male. The second was not throwing himself at the feet of the students immediately and opening the school wallet as soon as anything happened.

This absolutely stupid situation which will no doubt be seen as some sort of societal victory by the self-imposed elites of our society is a microcosm of the greater problem that is destroying the credibility and usefulness of the university system. It is well documented that our nation's colleges and university are becoming a very expensive day-care for supposed adults that does little to either educate or prepare students for the real world. In fact it is often doing just the opposite. In a bitterly ironic twist this is especially true for minority students, at least black and Latino students, who are given every ounce of preferential treatment possible that doesn't reflect the real world in any way and in essence insults them by assuming that they are not able to compete with white and Asian students without massive hand-holding. I seem to recall back to my university days where essentially every instructor I had was some sort of leftist ideologue. I somehow managed to make it through the system and even was a regular columnist for our school paper my last year, a token conservative voice. Having to face a wall of opinion from my teachers that I thought was wrong and dangerous didn't throw me into paroxysms of fear. In fact it helped me to hone my rhetorical and reasoning skills, something I have used to my advantage throughout my career.

Since our educational system is geared to shove as many students into 4 year degree programs as possible, regardless of whether they are academically up for it or if it will provide them any benefit in the future, it would at least behoove the university system to give students some useful skills, like coping with people you disagree with without a tantrum or turning into quivering jelly at the slightest provocation, especially since that system saddles many students with a heap of debt they have no chance of paying back. Instead many college students seem to be actually regressing into early childhood at the cost of tens of thousands of dollars a year. A man loses his job and likely ends up being unable to work in his chosen field in the future, all because of a couple of random incidents that he failed to exhibit the proper level of outrage and guilty white self-flagellation. I don't know if he was a good university President or a poor one, only that his actual performance was rendered moot by a mob of over-sized children.

Take a good look America. These are the people who are going to run this country in a few decades. Heaven help us.
Posted by Arthur Sido at 1:25 PM

I thought Australia was the only country that had kindergartens running under the nom de plume of "university".