Repost: The first martyr of the Radical Reformation

Each year I try to remember the anniversary of the murder of Felix Manz, one of the earliest Anabaptist leaders and the first of many to be murdered by other "Christians". His death and those that follow are sobering reminders of the ease with which men, even men professing piety and morality, make excuses for the most heinous of behavior. 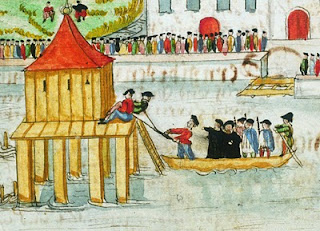 Today, January 5th, marks the 488th  anniversary of the first martyr of the “Radical Reformation” on 1/5/1527. Felix Manz was executed by drowning in Lake Zurich, the first of a tragically large number of dissenters to be martyred by Roman Catholics and Protestants alike. We often think of the martyrs of the reformation era as men and women murdered by Roman Catholic authorities (i.e. Foxes Book of Martyrs) but the ugly truth is that often it was professing Christians murdering fellow believers over issues of doctrine.

Episodes like the martyring of Felix Manz are disquieting because we place such a reverence on the Reformation era and the Reformers. Men like Calvin, Luther and Zwingli are some of the heroes of the faith because of their deep and voluminous writings. Their writings are unmatched for depth and being simply exhaustive. Nevertheless, men like Zwingli and Calvin are redeemed sinners the same as any other Christian and are as flawed as any man. While love covers a multitude of sins (1 Peter 4:8), writing a great treatise on theology doesn’t. Zwingli reportedly wrote this regarding Manz two days before his death: "The Anabaptist, who should already have been sent to the devil , disturbs the peace of the pious people. But I believe, the ax will settle it." . My point here is not to burn the Reformers in effigy but instead to remember the courageous death of a fellow believer who paid for his conviction with his own life in a manner that is worthy of any of the great martyrs of faith.

We can dance around this all we like. Technically, Manz was executed by drowning because he broke the law (i.e. was baptizing people) but make no mistake. This was a theological issue being settled by the sword far more than a civil legal issue. He was murdered for questioning the doctrine of infant bapstism as a holdover from Rome. These were the charges brought against him:


"because contrary to Christian order and custom he had become involved in Anabaptism, had accepted it, taught others, and become a leader and beginner of these things because he confessed having said that he wanted to gather those who wanted to accept Christ and follow Him, and unite himself with them through baptism, and let the rest live according to their faith, so that he and his followers separated themselves from the Christian Church and were about to raise up and prepare a sect of their own under the guise of a Christian meeting and church; because he had condemned capital punishment, and in order to increase his following had boasted of certain revelations from the Pauline Epistles. But since such doctrine is harmful to the unified usage of all Christendom, and leads to offense, insurrection, and sedition against the government, to the shattering of the common peace, brotherly love, and civil cooperation and to all evil, Manz shall be delivered to the executioner, who shall tie his hands, put him into a boat, take him to the lower hut, there strip his bound hands down over his knees, place a stick between his knees and arms, and thus push him into the water and let him perish in the water; thereby he shall have atoned to the law and justice. . . . His property shall also be confiscated by my lords."


“Harmful to the unified usage of all Christendom”? I don’t think drowning dissenters was what Jesus had in mind when He prayed for unity among His people in John 17: 21 . I especially like the part where they confiscate his property. Felix Manz was not a violent revolutionary like the men at Muenster. All he sought was “to bring together those who were willing to accept Christ, obey the Word, and follow in His footsteps, to unite with these by baptism, and to leave the rest in their present conviction”. The crime of Felix Manz was shaking up the religious order of things, kind of like another group about 1500 years earlier (see Acts 4: 13-21). For refusing to baptize infants and insisting on baptizing only willing adults, Manz was imprisoned several times, threatened with death and ultimately executed by drowning.

What Felix Manz was promoting is the basic belief of thousands of churches and millions of Christians in America, i.e. the baptism of believers and the voluntary association of Christians in the church. Try to imagine if the city council in Louisville decreed it illegal to refuse to baptize infants under penalty of death and further try to imagine if “Christian” ministers in Louisville stood silently while this went on. Manz may have been the first martyr among the Anabaptists but he was hardly the last. We need to remember those who were slaughtered by other “Christians” when we remember the Reformation era.

How I wish we had more Christians today who had the force of conviction of men like Felix Manz, men willing to abandon all for the truth and who had the courage of conviction to stand up for the Gospel of Jesus Christ in the face of real persecution, men who were unsatisfied with the “halfway” measures of the magisterial Reformers and sought a full restitution of the Biblical pattern for the church.
Posted by Arthur Sido at 10:00 AM