Some Thoughts on Election Day and the American Church

I am and always have been a political junkie. I majored in political science in school with a minor in history and for me and my family politics is a passion, one we purport to hate but really kinda love. Today of course is the first Tuesday following the first Monday in November and that means election day. I wanted to share a few thoughts for this almost sacred day in the life of America and the church that has been called to this land.

First, THIS is not helpful. When I got up this morning and logged into Facebook I saw this status from Albert Mohler (also induced the comment I made in response on my timeline). 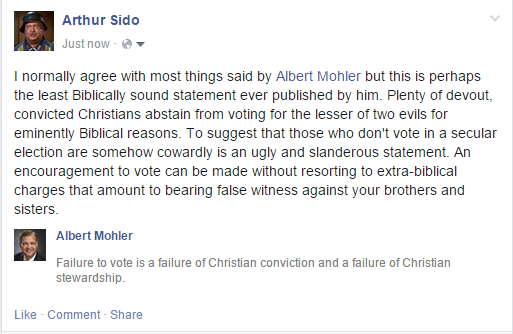 Now as I said I almost always agree with or at least respect what Dr. Mohler has to say. Not this time. That statement is about as Biblically valid as the nonsense propagated by prosperity preachers. In fact it is a pretty fair example of the thinking that pervades the American religious culture where Christians in America are a little too heavily identified as Americans who happen to be Christian rather than Christians who happen to live in America. Like I said, that is an incredibly unhelpful and frankly ignorant statement.

Second, I think a lot of my fellow believers are excited at the prospect of the GOP retaking control of the Senate but I would caution us as a people against expecting too much or placing too much hope at the feet of politicians. I expect the Senate to change hands tonight and I also expect business to go on as usual in America with slight modifications. Debt will still pile up. Money will be taken from some and given to others by force. Military spending will rage on unchecked and wars to justify that spending will continue to be conjured up. In other words, very little will change.

Third, while most Christians are voting, many are not. I respect that and still am on the fence with this issue. I wrote a while back some thoughts on this topic in a post Why Worry About Things That Don't Matter? In that post I wrote:

All things being equal, a society with a free exchange of ideas is better than one without. A society with an opportunity based economic system is better than one with a false outcome based system. A nation where children are not murdered in the womb is better than one where they are. A nation that incentivizes and protects marriage with a mother and father is better than one that waters down marital relationships to an unlimited number of permutations that all demand equal recognition no matter how harmful they are. A peaceful nation state that restrains her own powers both domestically and abroad is a freer and better neighbor than one that treats all of her citizens as potential criminals and interferes over and over in conflicts that are none of her business. I believe that a people who individually, voluntarily and collectively work together to aid the poor, the widow and the orphan is preferable to one that confiscates from some to give to others and where individuals subcontract mercy work to the state or the religious institution. I believe it is profoundly immoral to bankrupt future generations with an enormous debt burden because of the greed, selfishness and incompetence of past and present generations. There are lots more but you get the idea. Just because something doesn't have eternal consequences doesn't mean it ought to be ignored. Feeding a poor person or visiting a widow doesn't make one a believer but that doesn't mean it is unimportant.

That is why I still vote but do so hopefully with open eyes and a recognition that this is not the Gospel.

Fourth, I will be voting for Libertarians where I can and Republicans where that is not an option. The GOP has been in the hands of statist defenders of the status quo for too long and it is high time they were disabused of the notion that about half of the people in this country are going to keep supporting their generally harmful policies. Being a little less liberal than the Democrats isn't getting it done and with the rise of men like Rand Paul and Justin Amash that is becoming a reality that frightens people like Lindsay Graham and John McCain. That is a good thing.

Whatever you do today, whether you vote or choose not to, let the Scriptures and Holy Spirit be your guide, not the American culture or the talking heads.
Posted by Arthur Sido at 9:44 AM

Email ThisBlogThis!Share to TwitterShare to FacebookShare to Pinterest
Labels: politics