Greg Boyd's Unbiblical Condemnation of Elijah and Why It Matters

I ran across something from Greg Boyd by way of someone criticizing a recent pronouncement. Turns out that Greg thinks that Elijah, acting in the Spirit and the same Elijah who is taken up bodily in a chariot of fire by the Lord, was acing in an ungodly and even demonic fashion when he defeated the prophets of Baal. From his article Eye for Eye: That Time JesusRefuted An Old Testament Teaching (emphasis mine).

So Elijah, through faith calling down the wrath of God on the false gods of the world, is acting in an ungodly, perhaps even demonic, manner.

Yes, one of the most potent examples of the power of God and the utter helplessness of the false gods of this world where God Himself calls down fire is actually an example of demonic power. This event recorded in Scripture is usually thought of as a comforting and encouraging verse for Christians. Turns out we all missed the point. Or maybe not.

When you feel free to make pronouncements that are barely tethered in any sort of way to Scripture you eventually find yourself making statements that are not only not tethered to those Scriptures but are completely contrary to what Scripture teaches. God indeed calls us to refrain from taking vengeance but not because vengeance is demonic but rather because it is God who will wreak 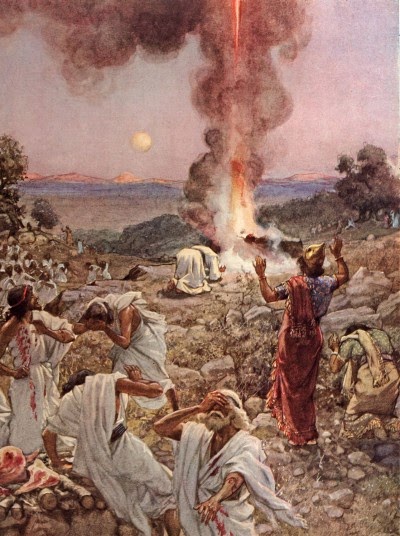 vengeance on the ungodly. Apparently Greg thinks that God can be invoked to do evil for demonic purposes by a mortal against His will, as though He is little more than an impersonal power supply like The Force that can be used for good or evil depending on whether you are a Sith or Jedi (in his example Elijah is a Sith Lord). Given that Greg is a well known proponent of the error known as "open theism", I guess it isn't surprising that he would embrace "God as the Force".

So Greg's statement, taken in context, is foolish, un-biblical, contrary to the plain reading of Scripture, contrary to the historical understanding of the church and, worst of all, more than a little blasphemous and defamatory to the person of God. It epitomizes the sort of clumsy eisegesis that tends to characterize a lot of what Greg writes.

So what, there are plenty of people who are tossing theological manure around the internet. Why does this bear mention?

The problem I have is that because Greg is so widely read and quoted, primarily among "progressive" religious types and also happens to espouse a form of non-resistance, when he says this sort of stuff  it paints those few voices who hold to more orthodox positions alongside non-resistance with the same heterodox brush. We already face an uphill battle against our culture and against hundreds of years of erroneous teaching on "just war". We really don't need Greg Boyd making statements that are not only foolish but also harmful to the greater cause of promoting practical peacemaking in the church. Guys like Doug Wilson easily blow apart this silly statement by Boyd and in doing so throws out stuff like:

So when you have painted yourself into an anabaptist corner, and your theology requires you to say that black is white, and that up is down, and that holy is unholy, and that God is the devil, and the devil is God, perhaps it is time to go back and review some of your foundational assumptions. You don’t ever want “I love the devil” to show up in your conclusions.

is scathing and correct about the error of Boyd on so many levels but also very neatly lumps Anabaptists as a whole and the entire stream of Anabaptism throughout history into the same camp as Boyd. I am not aware of any actual Anabaptists historically that would concur that Elijah called down the fiery power of God in an act of demonic pique. The more Anabaptists and their modern admirers welcome and embrace false teachers, the less the rest of the church is interested in hearing about actual, historic  Anabaptism and as I have written many times before that is tragic because the historic Anabaptists have a lot to teach the church to help prepare for the days to come.

There are also plenty of Boyd fanboys on the interwebs that will swallow his assertion about Elijah without question. It is fine to have well-known teachers that you appreciate but you have to also be able to read them with some discernment and call out when they are in error (like Al Mohler's statement on voting last week). If no one calls out people like Boyd they just keep going, deeper and deeper into error.

As I have written before, the impulse to overreact against tradition or fundamentalism or whatever is leading too many people, Christians and other generic religious folks, to welcome anyone who is perceived to not be a mean old fundie. The list of people peddling error is growing by the day, selling books by the thousands and getting invited to speak to the church. This is not a sign of progress, it is a sign of retreat. When the church fails to exercise any sort of discernment and the only sin is being too serious about the faith, it has ceased to be the church in any meaningful and Biblical sense. People like Boyd, even when he is close to the mark on an issue or two, who deny the fundamentals of the faith should be called out and called to repent, not celebrated and fawned over.
Posted by Arthur Sido at 3:57 PM