Repost: On The Wearing of Wedding Rings

Back in 2010 I wrote a post about the wearing of wedding rings. It was a topic that had come up so it was on my mind at the time. It still gets a lot of hits. In the two and a half years since I wrote that post my wife and I have thought about the topic now and again. About a month or so ago we stopped wearing our rings. I would like to sell them, along with our class rings which are also gold, and give away the proceeds. I figure wearing a ring don't make more married than I already am and an orphan in Haiti could use the money. My wife isn't quite to that stage yet but it has been a while since we stopped wearing them and no one has tried hitting on me (maybe because my finger has a permanent line where my ring used to be or maybe because my grey beard makes me look like I am 60). So we are still working though it but I thought I would put the post back up.


----------
So this is an interesting conversation that has come up among some friends and one that generates a visceral reaction when broached.

Wedding rings are firmly entrenched in our culture. The exchanging of rings and wearing of them to signify that the wearer is married is part of our cultural heritage even to the point of being the focal point in a whole bunch of country music songs (“I put that little golden band on the right left hand this time….”). Removing a wedding ring can be an indicator of a marriage that is broken. Cultural nostalgia is a big deal when it comes to these small symbols of marriage. Getting an engagement ring is a huge deal for women (if you have ever worked with a young woman who gets engaged the next day at work is filled with her friends and co-workers ooohin and aaaahing over the diamond)

Here is the question. Should Christians wear wedding rings or for that matter should Christians wear any sort of jewelry at all? My wife wears a modest wedding ring and has a couple of other pieces of frankly fairly inexpensive jewelry that she rarely wears. Should she? Why not you ask? Because it certtainly seems that Scripture doesn't permit this tradition.

Scripture seems pretty clear on this, generally in the idea of meekness and humility which seems ill served by a ring made out of a precious metal and often adorned with a pricey diamond as well as more specifically in two passages. I copied the whole section, not just the verse in question to give us a more full view and highlighted the particular verses:

Likewise, wives, be subject to your own husbands, so that even if some do not obey the word, they may be won without a word by the conduct of their wives, when they see your respectful and pure conduct. Do not let your adorning be external—the braiding of hair and the putting on of gold jewelry, or the clothing you wear—but let your adorning be the hidden person of the heart with the imperishable beauty of a gentle and quiet spirit, which in God's sight is very precious. For this is how the holy women who hoped in God used to adorn themselves, by submitting to their own husbands, as Sarah obeyed Abraham, calling him lord. And you are her children, if you do good and do not fear anything that is frightening. (1 Peter 3: 1-6)

I desire then that in every place the men should pray, lifting holy hands without anger or quarreling; likewise also that women should adorn themselves in respectable apparel, with modesty and self-control, not with braided hair and gold or pearls or costly attire, but with what is proper for women who profess godliness—with good works. (1 Timothy 2: 8-10)

The principle invoked here is of not being adorned with attire (which would include jewelry) that is prideful and designed to draw attention to the external but rather women in particular should be adorned with good conduct, good works, a gentle spirit and submission to their husbands.

This of course raises some questions. If we are not supposed to wear wedding bands because they are costly adornments, what about a plain band? What if the band was plain and also not gold? Should we eschew any sort of accoutrement that sets us at all apart from someone else? I also note that these two passages apply to women, so is it OK for men to wear wedding bands but not women? Is the wearing of adornments something of particular prideful temptation for women but not for men?

What about name brand clothing with logos ? Clothing companies put their logos on the outside both as an ad for their product as well as to let the wearer signify that they are wearing something more costly than you are. The horse and rider on Polo brand shirts is a great example. I used to sell The North Face jackets to rich kids because the logo tells people that this is not mere fleece or rainjacket, it is a $300 North Face jacket! I think the principle might hold true here as well.

I wonder if we should wear anything that is not plain and handmade. I need to wear suits and appropriate business attire for my job but outside of work, what about that?

There is a real issue and an important principle here that we don’t seem to address in a straightforward manner in the church. I think it might be for the same reason headcovering is glossed over, because it flies in the face of our cultural expectations. On the other hand, this can turn into a point of pride. It is easy to see your own plainness as a point of pride, that I am more holy than that person because of the manner of my dress. Those sorts of heart issues are far more troubling than external obedience and that is true not just about adornment or modest dress or headcovering but also wearing suits to church or lengthy prayers or being contentious or giving our of obligation. It is not difficult at all to be externally pious but have hearts in rebellion.

There is also a stewardship issue, is the buying of $1000 golden ring topped by a diamond foolhardy in light of the very real temporal needs of our brothers and sisters, of orphans and widows, of missionaries? That is an ancillary topic but a real one. 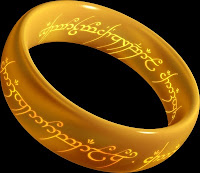 Is it a coincidence that the One Ring, a golden band that looks suspiciously like a wedding ring, is the embodiment of evil in The Lord of the Rings? Hmmmm…..

Seriously though. Should we give up the wearing of wedding rings or am I making too big of a deal about it? Is this an issue of hyper-literalism and legalism or are we resistant to the idea of eschewing rings because we have been so heavily marketed to by jewelry companies that we have bought into the idea that we simply must wear rings if we are married? Maybe someone more familiar with the Greek text (Alan?) can help us out here, is there something in the context that I am missing.
Posted by Arthur Sido at 1:42 PM

Email ThisBlogThis!Share to TwitterShare to FacebookShare to Pinterest
Labels: modesty

I was raised this way--to believe in "no superfluous adornment." Some say that the verse is less a ban on such adornment --but a teaching that externals aren't what makes one attractive --that we not think of external adornments as our real adornments.

My husband lost his wedding ring after a baby delivery when he tied it to his gown and accidentally threw it down the laundry chute. since he had to wash hands all the time --and had some metal allergies --he didn't try to replace the ring. And I don't feel comfortable in mine in the house so always take mine off --lost mine for about 20 years, too --or thought I did --it was in an old jewelry box all along --anyway, one day a patient asked him if he would be interested in "an affair." He assured her he loved his wife --and next thing I knew he went out and got a wedding band and hasn't taken it off. This was within the last 5 years --he came home and asked me to notice his new "bling." This gesture means a lot to me and says a lot to me about him and his love for me --and his desire to have a clear testimony. Sometimes, people think a married man slips his ring into his pocket so women will not know he is married --and I look at a man's finger to see if he might be single --and a prospect for my single daughter! So people do notice -if they are wondering about your status.

But is it necessary? Is it good to put money into missions instead? Of course. This is in the category of "to each his own," I guess.