What Makes Us Married?

An interesting conversation came up the other night on the topic of marriage. It seems like a simple question but it is more complicated than it seems at first blush: What makes a couple "married"? 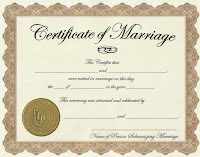 The Bible speaks a lot about marriage, about being married, about relationships between husbands and wives in marriage, about marriage as a picture of the relationship between the church and Christ, about divorce, etc. Given the importance of marriage in the Bible Christians in American especially are likewise very concerned about marriage; we march to defend “traditional marriage” and we have voter guides to tell us who to vote for that upholds Biblical marriage. Of course our idea of traditional marriage is just that, tradition. One man, one woman, till death do us part. When it comes down to the details on issues like divorce and remarriage, abuse in marriage, having and raising children? Yikes. We are a people that loves marriage but doesn’t have much of a clue what that means outside of a “church wedding”.

The question that was raised the other night has to do with the relative silence of the Bible on the “how” of marriage. How do people go from single to married? Thanks to centuries of social and religious tradition we think we know the answer. You go to an ordained cleric (with a document showing that you have the permission of the state to get married) or you go to the justice of the peace and get legally married. Because you have the permission/blessing of the state to get married you get legal and financial benefits. Ergo, ceremony=married.

That isn’t how it was done in the Bible or at least we aren’t told that it was. We see precious little of the specifics of marriage "ceremonies" in the New Testament with the exception of the wedding feast at Cana and the parables using weddings as a setting and even those don't give us a clear "how" when it comes to marriage. I would guess that in spite of that most Christians would say that someone who has not gone through a state approved ceremony is not truly married. Thanks to our perverse system of religious-state symbiosis where we expect and indeed demand preferential tax treatment for our private religious functions, a marriage without the approval of the state and the accompanying financial/legal benefits is not viewed as legitimate.

Even though the Bible is relatively silent, we do see a fairly early sign that the church was moving toward a clergy controlled marriage system. In the Epistle of Ignatius to Polycarp he writes, almost in passing:

But it becomes both men and women who marry, to form their union with the approval of the bishop, that their marriage may be according to the Lord, and not after their own lust. Let all things be done to the honour of God.

The topic being addressed is more generally the duties of husbands and wives but it also seems to me that he was writing to address an issue that was cropping up, although I am not certain what it is. What is interesting to note is that the overarching principle here is all things being done to honor God. Does that necessitate a "church wedding" or a civil proceeding? Does it require the oversight and approval of clergy? I am not talking about a man and a woman seeking counsel from the elders of the church, something that seems a reasonable and prudent measure. I am talking about marriages only being seen as legitimate when officiated by a religious professional that has the approval of Caesar the state.

I just don't see the Biblical warrant for declaring some marriages legitimate by virtue of a legal construct of the state. Maybe I am missing something. Perhaps this is a Romans 13 issue where we follow the state's rules. Or maybe this is an issue of rendering unto Caesar something (i.e. marriage) that rightfully belongs to God. If two people declare their covenant, exclusive relationship to one another in marriage is that not sufficient for the church? Or must the church bow to the demands of the culture and tradition.

What do you think or is this just one of those weird questions that I think are fascinating and everyone else thinks is dumb?
Posted by Arthur Sido at 12:53 PM

Email ThisBlogThis!Share to TwitterShare to FacebookShare to Pinterest
Labels: marriage

Arthur, I think its fascinating too. I briefly considered not getting a marriage certificate before my wife and I got married because I disdained the civil control over it. From the few biblical examples, I think 3 things make a real marriage. 1) a real lifelong commitment from each individual toward the other. 2) recognition of the surrounding society/culture that this commitment exists and is being held too. 3) and sexual intercourse. However, that last point seems challenged by the example of Joseph and Mary. And the 2nd point is hard to define exactly. So I guess I see the first one as the most important one, but really all three are needed.

Seth, I think there is a case for your second point and the third is implied. On the second do we do the ceremony thing for the sake of our witness? Difficult question.

I don't really care for the ceremony part myself, so we got married on a beach in 20 minutes time. I think the Jews of Jesus' time had it right when they emphasized the wedding feast, and not so much the wedding itself. Would love to see a return of that. I love going to a good wedding feast/reception myself, especially when there is plenty of good food and an open bar :)

Arthur, do you not think the 1st point is valid? How can there be a marriage when one party is unwilling or uncommited?

The difference between a secular marriage and a Christ-honoring marriage is that in a Christ-honoring marriage your mission is to make each other better servants, to focus each other on your true vocations in life. The marriage is not between the bride and groom, but between God, the bride, and the groom. Hence why in most Christian ceremonies the minister asks the bride and groom a series of questions which they answer facing the minister and the altar (making their commitments to God). Then they recite their vows to one another either by repeating after the minister or by reading vows they have written down(making their commitments to each other). That entire first half of commitments is completely missing in a secular ceremony. Are secular marriages legitimate? Yes. Are religious marriages legitimate? Yes. But each serves an entirely different purpose. I've struggled with this for a while, being someone very deep in my Presbyterian faith and dating a Jewish man. I love your blog and if you have any guidance for me on this, that would be great. I think it would be, well, impossible to have a Christ-honoring marriage with someone who does not believe in Christ (or was just raised with no real concept of Christ). Then I look at the morality and wondering if a God-honoring marriage is the same as a Christ-honoring marriage. What do you think?