Illegal Immigrants and the Gospel

The hot issue of the day has suddenly become illegal immigration and what to do about it in light of a "comprehensive" immigration reform policy. Clearly something is not working and the news has been a-buzz with talk of a compromise brewing in the Senate. Like most "compromises" we have seen lately it seems to amount to giving Democrats everything they want immediately in return for vague future promises of reform that will, like spending cuts, never happen. Of course we need to keep in mind that for all the rhetoric from Republicans, the GOP gets lots of support from lobbyists like the American Farm Bureau Federation and the U.S. Chamber of Commerce that are all in favor of super cheap laborers so most of this chatter is a bunch of empty rhetoric anyway. So how should Christians living in America think about the issue of illegal immigrants? I have posted about this before and I have never been happy with the way it came across so here it goes again.

What makes this issue so difficult is that it has both a political and a Kingdom aspect and they seem to conflict. This conflict makes our public discourse seem confused and muddled at best, hypocritical at worst. I don't think many Christians come off well when speaking about this issue. First, the political issue. 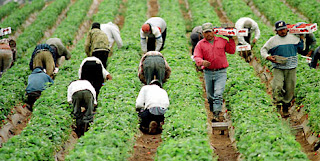 The oft repeated pragmatic political argument is that illegal immigrants fill a crucial niche in our economy, doing "jobs that Americans won't". That may or may not be true but what certainly is true is that at the same time that we are getting arguments about illegal immigrants being needed for low wage, low skill jobs that sit unfilled we have millions of Americans who are refusing to work thanks to government transfer payments. If I were to lose my job I would not run out and get a job picking vegetables or butchering chickens because I wouldn't have to. I have a disincentive to settle for an undesirable job because of various social safety net programs. Instead of being a temporary bridge between employment, unemployment and other transfer payment have become an alternative to employment. People respond to incentives and when the incentive to stay home overrides the incentive to take a less than desirable job, the results are predictable. When we have millions of people out of work we should never hear an excuse for illegal immigration based on "no one to fill these jobs"

It is also virtual political suicide for Republicans. Adding millions of new Democratic voters in states like Florida, Georgia, Texas, etc. is not a recipe for future wins at the ballot box. Do they think that newly minted citizens working at the very lowest wages are suddenly going to become champions of lower taxes and reduced social spending? Especially since many Republicans are dumping social issues as fast as they can to appeal to a broader audience and those social issues are the only right-wing issues that might appeal to former illegal aliens. It is a lose-lose issue for the GOP. Oppose "immigration reform" and get painted as intolerant. Embrace it and get little credit and millions of new Democratic voters. So the political issue makes real reform pretty unlikely especially since the Left smells blood on this issue and is in no mood and has little incentive to compromise.

The political issue are not nearly as important as the Kingdom questions and the theological issues are even more thorny given the high correlation between evangelicalism and conservative politics.

Can I just ask this one favor at the outset? Can we stop trying to paint Joseph and Mary fleeing with Jesus to Egypt as proof that Jesus was an "illegal immigrant"? That is such a clunky and frankly ridiculous argument that it acts as nothing more than a cheap rhetorical trick. First as far as I know Egypt didn't have immigration laws like those of the United States. Second Joseph was commanded to flee with Jesus directly by an angel to avoid Jesus being killed by Herod and also to fulfill OT prophecy. Not quite the same thing as seeking better employment opportunities. Third they were not immigrants, if anything they were visitors. Joseph wasn't looking for a better job, he was fleeing so he was if anything analogous to a political refugee, a category of people we already make special provision for. Finally, once Herod was dead they went home. Jesus was not a proto-illegal immigrant so please stop with that. It unnecessarily muddles the discussion and it cheapens the Biblical event of Christ fleeing to Egypt.

As far as how we treat and speak of illegal immigrants, we must be mindful of the commands to love everyone whether neighbor, enemy or sojourner. I try to avoid the "social justice" language of oppression when talking about illegal immigrants as their oppression is the result of willfully breaking the law. Being arrested and deported comes with the territory. That being said illegal immigrants who need Jesus are not less deserving of our love and mercy as the church than a native born citizen of English descent. We don't need to dress their plight up in politically correct language nor do we need to demonize them as invaders. We just need to see them as human beings made in the imago dei who need the redemption that only comes via faith in Christ Jesus. There is not one Gospel for middle class, white native born Americans and another for illegal immigrants.

As an aside, I wondered about this the other day. What should a new believer in Christ do if they are here illegally in light of Romans 13 and rendering unto Caesar? It seems to me the proper thing to do would be to leave and try to re-enter the U.S. legally.

This is where the problem of entangling the Gospel and the powers of the world becomes so troubling. You can have, as I think I do, a very reasonable political and economic argument against unfettered immigration or amnesty for current illegal immigrants but it is hard to set that aside when viewing the need to take the Gospel to the illegal immigrant in America. The same holds true when looking at warfare, an enemy of the United States is also someone I am called to love and take the Gospel to. Issues like illegal immigration make me question once again the wisdom of being "politically active" as followers of Christ. More to think about on this topic and the broader question as well.
Posted by Arthur Sido at 1:36 PM

As with many subjects, it is easy to have opinions about social issues such as this topic today when we are able to speak in general terms.

Perhaps it is simply a matter of semantics but I prefer to refer to people as undocumented residents. I have a friend from another country who came into the US legally but overstayed his visa. It is not a simple matter to leave the US and then re-enter. There are stiff penalties that prevent one from applying for new visa if you have overstayed a previous one.

While I realize that it is important to obey the laws of the nation where one is residing, many undocumented residents have come from desperate situations. If I were in their place, I probably would be willing to take the same risks.

Tom, understood but this is a large issue so it is not feasible to look at 11 million individual cases on a one on one basis. Your friend for example might have the purest of motives and like you I might do the same thing in his situation but ultimately he knows that he is in violation of the laws of the United States. It is a complex and diffcult topic to be sure.

Our country's visa system is entirely dishonest. That's not the fault of Jose in a little mountain village in Mexico who is trying to find work to feed his family. We have about 100,000 H-2 temporary worker visas available that are permanently available and must be renewed each year. We have 10 million plus temporary labor positions in our economy. Don't blame the immigrants. What we have is an extremely cynical system by which the federal government knowingly looks the other way while farmers and factory owners send coyotes down across the border to pick up their Mexicans for the season. As long as the Mexicans stay in line and don't try to organize unions or get into bar fights, no questions asked, but if they start talking about the wages or the living conditions, then suddenly the farmer or factory owner discovers that he might have "accidentally" hired an illegal and calls up ICE to go in and raid so that he can send down another coyote a few weeks later and get a fresh crew. It's the most cynical thing I've ever seen. And then we've got people like you who make judgments based on entirely abstract speculations. God sees everything; all will stand before Him.

Morgan are you suggesting that those here illegally don't realize that they are breaking the law? I am sympathetic to their plight and I am all for serious criminal penalties for employers who hire illegals but the fact remains that they are willfully breaking the law. We absolutely need to open the doors to allow skilled laborers to come and to stay and make it easier for unskilled workers to come here legally but let's not deify the illegal immigrant who, regardless of the nobility of his motivation, is breaking the law to be here.