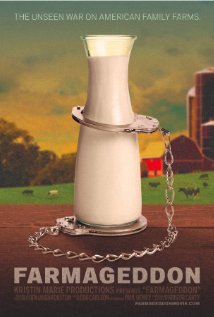 We have been looking forward to watching Farmageddon for some time. Thanks to a couple of hiccups with Netflix streaming it just became available on Friday. We wasted no time in sitting down after dinner to watch. What we observed was not news to us but when you hear mothers talk of the terror of having an armed agent pointing a gun at her with children in the house or the frustration of a farmer that is having their livelihood destroyed by bureaucrats, it brings home the reality of what is going on in our food system.

So much of our food comes from a bag or a box or a can or a cellophane wrapper. Little of what we eat is recognizable as actual food and is far removed from the farm. Sure it fills you up and sustains life but looking around at a growing population of people that are living longer but living less healthy lives is of major concern. The same government that seeks to take over "health care" in this country and regulate farmers who raise actual food at the same time coddles and subsidizes the production of unhealthy foods. The two major crops in this country, taking up enormous amounts of acreage, are field corn and soybeans. Guess what, you can't eat either of them! That is a little known fact. If you go into a nearby corn field or soybean field and try to eat what is growing there you probably will get ill. Our agricultural industry is focused on growing an inedible crop, crops that require a great deal of processing to turn them into something we can use or they are fed to livestock as unnatural feedstuffs that serve to pack fat onto animals at an incredible pace.

In this landscape there is another troubling development that has gone unnoticed for a long time but is finally getting the attention it deserves. This development is the intrusive action of the Federal regulatory bureaucracy, an unaccountable and increasingly militarized group, spending untold millions and ruining lives to prevent small scale agriculture from marketing their products to consenting and informed consumers. Into this war being fought across the country virtually unseen by the average America comes Farmageddon, a documentary look at just a few of the lives ruined and families terrorized by bureaucrats. When homes are broken into and businesses assaulted by agents pointing guns at law abiding, unarmed citizens for the "crime" of selling raw milk, something is very wrong. That a law enforcement agent should ever unholster his firearm, much less point it at an unarmed citizen who poses no threat, makes a mockery of our system of justice. We the people provide these men with firearms not for the purpose of terrorizing citizens or to make them feel like Rambo but to protect the people of the United States. Any agent of the government who pulls his gun and points it at an unarmed, cooperative citizen should lose his gun and his badge and face charges for menacing and assault.

As this film unfolds, we watch over and over again as the government of a country where hunger is a very real problem and obesity and other dietary related illnesses are growing into epidemic proportions sends armed officers to trash food supplies, force citizens to pour milk on the ground and seize the livelihood of farmers. While massive food conglomerates can sell unhealthy chemical compounds to consumers and call it "food" with the blessing of the government, small farmers are persecuted for selling actual food to consumers who make a conscious choice to pay more for a more natural product. I don't support the food police telling Wal-Mart that they can't sell Doritos and Mountain Dew but likewise I don't support the suppression of food producers filling a niche but growing market because it is seen as a threat by the mass produced food industry.

One of the things that stood out and was really cool was the diversity on  the farms they showed. None of the this homogenization where a "farm" only has one species and one breed of livestock. The farmers in Farmageddon milked Holstein, Brown Swiss, Jersey and Guernsey cows, raised a variety of cattle and sheep and had a wonderful mix of poultry. One of the things we love about where we live among the Amish is the diversity and activity on their farms. While our neighbor has a huge hog operation you would never know if it weren't for the smell because you never see the animals. They live their lives in confinement from birth to death, hybrids designed to produce a uniform product as efficiently as possible. The problem with that system is that an awful lot of our food is dependent on a pretty narrow spectrum of crops and livestock. If anything happened to those handful of products we would be in trouble. That doesn't stop the extreme homogenization where farms rotate a few crops or one species of livestock. On the other hand many Amish and other small scale farms are teeming with chickens, horses of course, cows, sheep, bees, goats and on and on. When we drive around there is always so much going on in tune with the rhythms of the seasons. Ironically and sadly the Amish in our area tend to consume a ton of junk food from Wal-Mart as well.

Films like this and the proliferation of blogs and other alternate news sources has brought to light the sort of unaccountable soft tyranny that has become the hallmark of the Federal government. As seen in books like Rand Paul's Government Bullies, these sorts of acts of authoritarian overreach happen all the time. An unelected, unaccountable government bully decides to make an example of a farmer or a land owner or a businessman and then proceed to bring the full weight of the government backed up by badges and gun. They have no disincentive to stop and an ego driven incentive to "make an example" of those who don't cower before a piece of paper waved by an employee of the FDA. I would encourage you to check this film out and show it to your friends. It may not seem like a big deal if you buy your food at the supermarket but if the government can run a small farmer out of business and seize their property

Thanks to the artificial tinkering with the market by our benevolent overlords in the government our pricing system is so skewed that it is virtually impossible to buy and operate a small scale farm. I would love to have a group of Christians that co-owned a small farm, raising food for our families, to give to the needy and be a way to evangelize. I recognize the near futility of that dream but I am confident that if the Lord is in it, He will purpose it to happen. More on this in a future post or three.
Posted by Arthur Sido at 9:00 AM

I will check out this film on netflix. Listening to a book on mp3 right now called the An Edible History of Humanity, it is interesting. The book explains that since humans moved from being hunter/gathers to farming food became an excellent way to control people and those in control of the food ruled.
Another interesting thing I heard today on radio 4 is that the government subsidizes the soft drink industry which allows the price for a totally garbage product to have a very low price, but it does not subsidize healthy food to help make it affordable.
Small sustainable farms with minimum use of chemicals are the way to go. Locally a young couple are doing urban organic farming along with a farmers market, they are located out close to Jefferson Point, and are called Atom Acres, I wish them well and hope that Fort Wayne is a big enough market to support they dream.
Ultimately a diet high in vegetable/fruit/nuts/seeds/legumes is the best bet for optimal health, with no dairy or meat. Weight issues will go away, along with high cholesterol and high blood pressure. Another interesting documentary about food on Netflix is Forks Over Knives, again the government has hugely influenced what we perceive as healthy eating and what is made available for us to eat.

All good food for thought :)