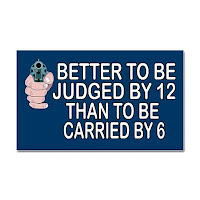 With the weekend behind us and the horror of last Friday still fresh our nation is entering the "what now" phase and predictably that conversation around guns. On the political left the usual suspects have already started beating the drum for bans on this type of gun and that sort of magazine. I would be more sympathetic to their views if I was not at the same time convinced that this is little more than political opportunism (never let a good crisis go to waste!) by politicians who have as their ultimate goal the disarming of the entire populace while simultaneously the Federal bureaucracy is more and more militarized. That sort of grandstanding is tired but predictable. Likewise is the political rhetoric on the right and especially among a large swath of the church that echoes the mindset of this bumper sticker. It would almost seem that the 2nd Amendment, if not part of the Ten Commandments, is at least part of the Nicene Creed.


There are two truths here that are somewhat at odds.

First it is no surprise that mass shootings typically happen in places where the resistance is lowest, places where people are massed together and unarmed. Even disturbed individuals don't go to a police station and open fire, they pick schools because the victims they have chosen is almost certainly defenseless and the few adults there are often women and always unarmed.

The second is that Christians are exhorted to not fear man and to be content in the Lord. It is troubling that I see so many Christians living in fear. Sure we can dress up that fear in high minded rhetoric but at the core is a deep seated fear of others. Jesus said:

I tell you, my friends, do not fear those who kill the body, and after that have nothing more that they can do. But I will warn you whom to fear: fear him who, after he has killed, has authority to cast into hell. Yes, I tell you, fear him! (Luke 12:4-5)

I own guns. I own handguns. I own several high capacity magazines that I have no use for but bought during the Clinton assault weapon ban to make a political point. I don't walk around armed at church or in the mall. I understand why some do having no assurance of a sovereign God but is that proper for Christians? I know I beat this dead horse again and again but every time something like this happens we see the same reaction from Christians. We need to talk about this. Not as Americans, I absolutely affirm that the 2nd Amendment guarantees an individuals right to own firearms and gun control legislation is foolhardy, but as followers of Christ and what it means to trust God in a violent culture. I wish we could have this conversation without dividing up into left/right political camps. Maybe someday.
Posted by Arthur Sido at 1:33 PM

Hi Arthur
1. we don't know each other; 2. we're from different countries; 3. we likely have very different backgrounds in Christ.

So - I am wondering in conversation. What does this 'right to bear arms' mean today compared to 200 years ago? Was it a right to take up arms against an unjust government? Or was it a right to protect self and family regardless of the damage to others? Maybe something else too.

Also I am wondering how I as a Christian would get that message of righteous war against Caesar or righteous self-protection from Scripture - or more importantly from my Lord.

I have been thinking a lot about Isaiah 2 these days and about Herod and all Jerusalem with him being disturbed at the birth of a king. It seems to me that our economics, our theology, and our means to express ourselves violently at another's expense, goes against our submission of gold, frankincense and myrrh at the feet of that same child.

I do not think our governments or our citizens are wise in their use of resources on behalf of ourselves or others.

I hope you do not consider these musings 'loaded' against you. I think - although I am quite capable of violence, that I would be better not to exercise it in these ways that appear to be nothing more than joining house to house (Is 5) and defending my turf against all who come.

I think you might have misread my post. I don't think anything I wrote could be interpreted as a call to righteous war against Caesar or self-defense. I argue quite consistently the opposite position, even arguing that the American Revolution was an violation of Romans 13.

While I affirm the Constitutional right of individual American citizens to possess firearms, specifically as a check against an unjust government but not limited to that, and I myself an a gun owner I am not advocating for the possession or use of firearms for self-defense or any other violent action.

Thanks for the reply Arthur. I read your asides in this post differently from what you intended. I didn't read the question mark after gunman. And I don't get the political point of having high capacity magazines. I don't have a problem with gun-control legislation. The statistics speak volumes. We may be vulnerable in Canada, but we are vulnerable together. The US rate for gun deaths per 100,000 is 10 times higher than ours.

Guns are, however, only a small part of the problem compared with our social cohesion in the face of mental illness, a large factor in the recent case. The gun was not registered to the shooter but to his mother. She herself was likely an overworked single mother with a mentally ill child and little respite from such a difficult situation. So for me at least, the problem reaches into funding at the social level for such difficult medical issues. It reaches into the mutual responsibility and interdependence that is part of our body-politic.

Again thank you for your response.

many good thoughts here...I think the calm rational dialogue is what is important and necessary,right ?

Bob, I would suggest that the cultural we have been witnessing where life is devauled is far more a culprit that the lack of sufficient social welfare programs.

Mike I would agree.