A Shallow and Amateurish Look At A Complex Man

At long last I have finished the biography of Dietrich Bonhoeffer written by Eric Metaxas, a book with a title as clunky and overly wordy as the text within: Bonhoeffer: Pastor, Martyr, Profit, Spy. 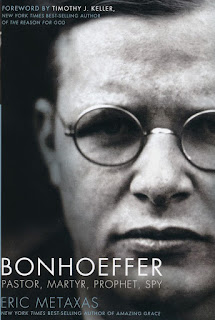 At the outset it is important to distinguish that this is a review of a book, not so much a review of the actual man Dietrich Bonhoeffer. Bonhoeffer, while not a "hero" and perhaps not even a martyr, was a fascinating if flawed man, a tantalizing "what if" figure. What if he had survived World War II? What if the plot had succeeded in killing Hitler? What if he had stayed in America instead of returning to Germany? I am not sure that I know him better now than before but as I will note later much of what I gleaned about Bonhoeffer comes in spite of the book rather than because of it.

While the flaws in this book are plentiful, perhaps a shocking statement given how generally well received it has been in the church and even the broader literary community, there are some positives to be had.

One of the most fascinating parts of this biography had to do not with Dietrich but with the church, a church that was so entangled with her identity as the "German church" that many times it found itself on the wrong side of history, caught up with her German identity that consumed and overshadowed her identity and mission in Christ. What a profound warning for the church in America, a church that likewise has been for many years overly associated with the secular nation we find ourselves in. I am afraid that the lesson of the entanglement of the church in Germany is by and large lost on the church in America.

Something else I found fascinating was the conflict between the man that Bonhoeffer was on a path to be and the way his life ended up. It is interesting that God used a man who came from such a comfy life, a life that seemed destined for a comfortable existence in academia, in such a way. Little did the young Dietrich Bonhoeffer know that his aristocratic lifestyle in German high society would be shattered by the fevered dreams of a madman and that his life would end ignominiously at the end of a Nazi noose just days before he could be rescued. Throughout his story his semi-aristocratic upbringing comes through, occasionally in an unconsciously arrogant way. How many examples like this do we see throughout history of God using the most unlikely of men in the most unlikely of ways?

One of the biggest negatives in Bonhoeffer is Eric's writing style. Every now and again the reader is allowed to glimpse the complex man that Bonhoeffer was but often that is in spite of the author who seemed bent on forcing his own interpretation onto the story rather than letting the reader discover the story on his own. I found the narrative difficult to follow thanks to repeated attempts to editorialize, making this book in places more about Eric Metaxas than Dietrich Bonhoeffer.

Throughout the biography Metaxas tends to be excessively wordy, especially when trying to use as many cartoonish adjectives to describe the Nazis as possible, preferably in the same sentence.  Here are some of the myriad examples...

The RSHA was led by the waxy lamprey Reinhard Heydrich


Trying too hard to cram "big words" into your narrative just makes for clumsy reading and is a sign of someone insecure about his intellect. Let the story be the focus, especially in a biography, not how many terms from your "word of the day" desk top calendar you can squeeze into a paragraph. It seems forced and contrived which really diminishes the reader's ability to focus on the story.

Another issue is an unabashed hero worship of Bonhoeffer. In places Bonhoeffer seems less like a biography and more like a teen-aged girl's diary. Dietrich is so smart, so cultured, so wise, so mature. Did I mention smart? Over and over again Metaxas glosses over or ignores Bonhoeffer's potential flaws using a mixture of angry rhetoric and sketchy theology. Dietrich lied and deceived repeatedly? Well he was mature enough to not worry about sin in pursuit of following God! For a man who is clearly complex, Bonhoeffer reads like a cartoonish story of a superhero, a man who's only flaw was just being so darned awesome.

The biggest flaw is the uncritical way Eric treats Dietrich Bonhoeffer's participation in the failed plot to assassinate Adolf Hitler. I would hope that a lot of thought and angst went into the decision but Eric skips mostly over that, perhaps assuming that any sane person would seek to assassinate Hitler. One moment we have Bonhoeffer struggling with his decision to go back to America and the next he is knee deep in a plot to kill Hitler and depose the Nazis. What happened? I would be far more interested in reading about that transition than endless anecdotes of Bonhoeffer's idyllic youth in a wealthy, privileged family. We are left with the assumption that Bonhoeffer was not only justified but being a faithful follower of the Prince of Peace who plotted, lied and participated in a plot to murder.

I don't see it that way. Rather I see Bonhoeffer's participation in the plot to assassinate Hitler and overthrow the Nazi regime as the greatest failing in an otherwise generally laudable life. That doesn't sit well with most people, even Christians. Hitler is the ultimate exception to the rule. How could anyone not approve of trying to stop a mass murderer? This is where the skilled biographer should bring out the details, let us see what Bonhoeffer was thinking and how he worked it out theologically. If Bonhoeffer was justified in plotting to kill Hitler because he was responsible for atrocities, would an American Christian be justified in plotting to assassinate the President and working to overthrow the government of the United States because the Federal government not only legalized but subsidizes the practice of abortion? Such hard questions are left by the side of the road in the march of canonization for Bonhoeffer. My point is not to stir up a Romans 13 argument re: Bonhoeffer but to point out that the big questions are left unanswered amidst the hero worship.

I came away from this biography feeling not renewed or encouraged but equal parts disappointed and exhausted. Finishing the book felt like a chore to be accomplished, not an achievement to be enjoyed. From his inexplicable decision to seek to murder Hitler to his relationship with the certainly immature and perhaps mentally unhinged Maria to his German nationalistic pride which seemed to be as much as driver of Bonhoeffer as his concern for the Jews, the picture I took away from Bonhoeffer was not the flattering portrait Metaxas tried so hard to paint but rather a more realistic picture of a man with great ideas that never came together cohesively in spite of and not because of the book. Had Dietrich lived to a ripe old age what might he have thought of his efforts to kill Hitler? We will of course never know and unfortunately Bonhoeffer doesn't help us in that task. As much as I looked forward to reading this book I came away glad to be done with it and eager to move on to something more worthwhile to read. Someday soon I hope to read a better biography of Bonhoeffer that perhaps will do more justice to this brother in Christ.
Posted by Arthur Sido at 9:00 AM

I too was greatly struck by the church being so entangled with its identity with the German Church that it embrace Hitler and Nazism. It is a profound warning to American Evangelicals who confuse Christianity with Patriotism. This lesson made the book worthwhile to me in spite of its flaws.

I had the same thoughts when I read the book that you did about the German Church and their being so closely tied to the German culture that they embraced Hitler and Nazism. Indeed, it is a profound warning to American evangelical churches. This lesson was worth reading the book even with its flaws.