Salt Lake City Is The Most Christian City In America?

Ah the Huffington Post religion page. Always a source for muddled theology, confused doctrine and outright hilarity. Today was no different. At least it is consistent. The source of today's religious LOL was a report on the most "Christian cities in America", Most And Least Christian Cities In America. Set aside for a moment the notion that a city can be more or less Christian than another. What really made me GOL (guffaw out loud) was the winner of the top spot. When you go to an article about the most Christian city in America and see this picture... 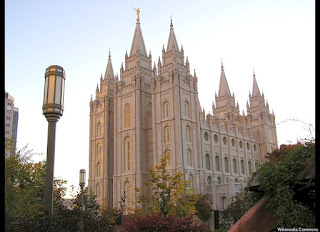 ...you know you are in for some good stuff. Anyway here is the methodology involved...

The researchers define adherents to be those with an affiliation to a congregation including children, members and attendees who are not members, and believe that the adherent measure is the most complete and comparable across religious groups. Congregations are defined as groups of people who meet regularly at a pre-announced time and location.

Um. What? When you check out the * next to the word "Christian" in the first paragraph, you find their definition for Christian....

*Christians include Mormons and Unitarians / Universalists who self-identify as Christians.

Of course. People who deny every tenet of Christianity absolutely should be categorized as "Christian". Egad.

Amidst this silly report is something that might be less funny. The report looks at those with an "affiliation to a congregation", i.e. someone who is a member or regular attender at a local religious group, and labels them "Christian" but isn't that the same basic criteria much of the church uses? When you meet someone who says they are a Christian, isn't one of the first things you ask them "where do you go to church"? On the other hand if you don't "go to church" anywhere many Christians question your very salvation even if you show many of the actual fruits that one should expect based on the New Testament.

Based on our cultural definition of "Christian" maybe this survey isn't as silly as it first seems and maybe that should worry all of us.
Posted by Arthur Sido at 5:59 PM