As I had lots of time to read over the weekend being sans internet I made some real progress in Hauerwas. In one chapter  I saw an interesting term that I wanted to look at more closely. Hauerwas is quoting from a book by Carolyn Martin and David Ingle called Blood Sacrifice and the Nation: Totem Rituals and the American Flag. Here is the quote, emphasis added (I do love e-books for the ease of copying and pasting quotes!)

Marvin and Ingle argue that self-sacrifice is the central theme of the American civil religion of patriotism and that nowhere is that better exemplified than in the American fetish of the flag. They provide extraordinarily rich and diverse iconographic and textual evidence to sustain their argument. For example, they call attention to a quote from Dwight D. Eisenhower’s published account of his induction into West Point. Eisenhower begins by describing the rough first day of initiation into West Point, at the end of which he confesses to being weary and resentful. Eisenhower writes, however, that “toward evening we assembled outdoors and, with the American flag floating majestically above us, were sworn in as cadets of the United States Military Academy. It was an impressive ceremony. As I looked up at our national colors and swore my allegiance, I realized humbly that now I belonged to the flag. It is a moment I have never forgotten.” - Hauerwas, Stanley . War and the American Difference: Theological Reflections on Violence and National Identity (Kindle Locations 1232-1239). 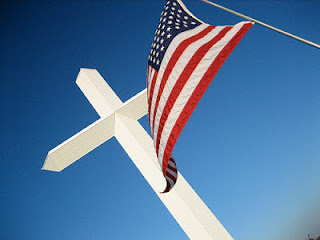 I found it ironic to be reading that just days ahead of Independence Day. That is the sort of statement that a few years ago would have caused me to chuck this book in the trash (or delete it since it is an e-book). Today it makes more and more sense as I try to take a step back from the culturally acceptable narrative of America.

The way that America reveres the flag is kind of disturbing, doubly so when Christians are involved. The American Legion has an entire page of "flag etiquette" that describes the proper way to fold a flag, care for a flag and even dispose of a flag. The flag folding section even includes this sentence: "The flag-folding ceremony represents the same religious principles on which our great country was originally founded". Reading the alleged symbolism in each fold of the flag kind of creeped me out to be honest. This reverence is drilled into us from a very young age. I still get a twinge when I see Old Glory, I still get chills at the singing of the Star Spangled Banner. I still to this day, in spite of a pretty radically different view of America in light of the Gospel and the reality of my Kingdom citizenship, carry the cultural baggage of reverence for a piece of cloth. Little wonder. Like virtually every other American kid as a child I stood every day, faced the ubiquitous flag and recited these words along with my classmates:

I pledge allegiance to the flag of the United States of America, and to the republic for which it stands, one nation under God, indivisible, with liberty and justice for all.

As a child I had no idea what that meant, the notion of pledging allegiance to a flag representing a republic “under God” even though at that time I didn’t believe in God at all. Nor did my classmates understand the significance but somehow I did know that refusing to say the Pledge would have singled me out as a troublemaker and likely drawn the ire of my classmates. So the rote repetition of the Pledge is meaningless at that age as anything other than a conditioning mechanism but that doesn't stop our society from having children memorize and parrot back a slogan that they completely don’t understand. In many ways it reminds me of the “testimony” meeting as a Mormon when parents would take their small children up front and whisper in their ears the words they would repeat back: “I’d like to bear my testimony that I know this church is true, that Joseph Smith was a prophet, that Gordon B. Hinckley is a prophet…”. These words mean nothing to a five year old child but getting them to repeat them over and over makes them part of the fabric and culture of mormonism, a culture that makes it hard to doubt and even harder to leave mormonism.

The same is true for the Pledge of Allegiance to the flag. The idea of a theocratic republic might be hard to fathom for a child but America as a concept personified by a flag, the same flag and the same pledge that I stood next to my classmates and recited over and over? Now that I believed in and as a child dreamt of one day killing the enemies of our fair land with the flag waving overhead. Not in those terms of course, as a child the idea of killing our enemies heroically in defense of flag and freedom was formed by movies and books but it certainly was something that seemed very noble. Granted as a child I didn't grasp what that meant but it builds the foundation for later in life when America asks teenagers to leave home to kill and be killed and asks parents to sacrifice their children in some foreign war, receiving a folded flag in return for the life of their child.

I sort of doubt this is (entirely) intentional but certainly the flag and what it represents serves as a totem for American self-sacrifice. Going to some foreign country to kill some foreigner who is trying to kill you in return doesn’t sound very appealing, but going to “defend” some sort of ideals and serving the flag? Fighting and killing for God and country, which are often portrayed as one and the same? Well that is something we can get behind and by get behind I mean be willing to die for and preferably to kill for.

So what does this mean for the church? Well for starters it means we need to be very cautious about how entangled we get with the civic religion of America and that starts with the American flag. I am not hesitant at all to say that no Christian should recite the pledge allegiance. First, the swearing of oaths to some authority other than God is not something Christians are permitted to do (Matthew 5: 33-37; James 5:12). Second, it is simply bad theology as this nation is no more "under God" than any other nation. Third, swearing allegiance to this nation implies a willingness to defend this republic which often has meant going to war against the very people we are called to reach for Christ.

On those same lines, as I have said before, there is no place for an American flag among the gathering of the church. Granted, if the church meets in a school or other public place where flags are already present I wouldn't suggest removing them but the ubiquitous nature of flags in most evangelical churches is disturbing and no doubt jarring to visitors from other nations raising the question of just who or what we are worshiping. Now having the flags of many nations, none raised higher than others, to remind us of the global mission of the church seems like an OK idea but for the Christian there is no choice land that is exalted higher than others. The singing of patriotic songs or of honoring the military? That just doesn't have a place in the gathered church.

For Christians who live in America we must always keep in mind that God has placed us in this land to reach Americans for Christ, making disciples here as well as elsewhere, just as He placed Christians under the rule of Caesar, of Hitler and Churchill, of Davis and Lincoln. Our purpose is not to serve America as Christians but to serve Christ in America even and perhaps especially when that means being unpopular or living at odds with the culture of this land.
Posted by Arthur Sido at 9:26 AM

I'm about 90% in agreement with every thing you blog about here. (I'm Presbyterian, so there's the other 10%!)

Will enjoy the 4th off with my family, but there will be no flag-waving, pledges, etc. at my house. That's for sure.

Thanks for your posts. Always enjoy reading them.

Much of what you say is true in the Australian scene.

I'm glad to read your sentiments "about how entangled we get with the civic religion".

Your last sentence certainly applies here, and anywhere else in the world.

When my family moved to the US in 1978 we were struck by how many homeowners and businesses flew the flag. In England no one flew the Union Jack in their front yard, and it was no where to be seen in the shops and businesses in our local town. We had no pledge to say each day at school, in fact I don't really remember seeing the Union Jack at school other than studying about it in history class to learn that it is actually a combination of three different flags. The only time I remember any huge outpouring of love for the Union Jack was in 1977 when it was the Queens silver jubilee, most communities had some sort of celebration/parade and the flag was flown, our class made cardboard top hats and painted the Union Jack on to them. Once the event was over the flags were immediately put away.