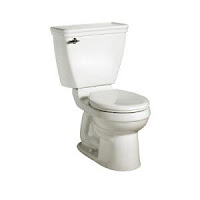 Better make sure the potty is clean!

From the Wall Street Journal...

Mr. Harrison -- a meticulous inspector who often uses the phrase "I was horrified" to register his disapproval of dust bunnies and rude congregants -- poses as a first-time churchgoer and covertly evaluates everything from the cleanliness of the bathrooms to the strength of the sermon. This summer, Mr. Harrison scoured a megachurch in Cedar Hill, Texas, and jotted down a laundry list of imperfections: a water stain on the ceiling, a "stuffy odor" in the children's area, a stray plastic bucket under the bathroom sink and a sullen greeter who failed to say good morning before the worship service. "I am a stickler for light bulbs and bathrooms," he says.

Now this shouldn't surprise me, after all we live in an allegedly capitalistic system and the church has embraced it. Religion has become a commodity and the church is many places is just a merchandising mechanism, a way to deliver the "product". When we start wondering what sinners want from church instead of what God demands from His worshippers, we have a problem. It is little wonder that people church hop when what they hear and experience on Sunday mornings is so trivial. Look for example at his report on a Texas megachurch and what he said about the sermon.
CATEGORY: Sermon
COMMENT: "The message is appropriate and meaningful. It is challenging and inspiring."
GRADE: Green Light
Well that is reassuring, it was relevant and inspiring. I wonder what sort of grade he would give to "Sinners in the hands of an angry God"? I am assuming he wouldn't find it inspiring or appropriate. Does he have a category for "Confronting sin", "God's Law" or "Hell"?
There was at least one voice of reason in the article...

Some theologians warn that mystery-worshipper services will drive "spiritual consumerism." Evaluating churches as if they were restaurants or hotels might encourage people to choose their church not according to its theology, but based on which one has the best lattes or day care, says Paul Metzger, professor of theology at Multnomah Biblical Seminary in Portland, Ore. "We tend to look for religion or spirituality that will give us what we want, when we want it," Prof. Metzger says. "There's a pressure for the church to be something that the church is not."

But that was followed by this...

Others say that church shopping has become necessary for churches seeking to compete in an increasingly mobile and consumer-oriented society. "My competition is Cracker Barrel restaurant down the street," says Pete Wilson, pastor of CrossPoint Church in Nashville, Tenn., who regularly enlists a secret shopper to evaluate his 2,000-person congregation. "If they go in there and are treated more like family than when they come to CrossPoint Church, then it's lights out for me."

See I thought that what Paul says is right:

Apparently this guy wrestles against grits, John Deere merchandise and free coffee refills! Two thousand people come on Sunday's to hear a guy who thinks that he should be competing with Cracker Barrel. Cracker Barrel. The church should absolutely be kind and welcoming, but what people should desire is to hear Christ and Him crucified on Sunday morning. I would rather sit in an uncomfortable pew with no A/C and less than delightful bathrooms and hear God's Word faithfully declared than I would sit in a comfy pew with a Starbucks and clean restrooms where fluffy heresy disguised as "preaching" is going on.

My pastor talked about the motivations of people coming to church on his blog. He somehow failed to mention a clean restroom in his blog post. I am sure it was just an oversight but it better be cleaner next week or I am taking my family to Cracker Barrel!
Posted by Arthur Sido at 5:31 PM

I saw this article, too. Just when I thought we had seen all consumerism had to offer the "church" I find that I had overlooked this important tool.

My proposition still stands: size does not necessarily equal faithful or good.

Seriously when I read the comment from that last guy, I was floored. I couldn't even make this stuff up. I mean, this is a great model for ministry; ""If they go in there and are treated more like family than when they come to CrossPoint Church, then it's lights out for me."

That is right, the most important part of faithful ministry is job security!