I posted this way back in October of 2008. I love the penitent thief. It could be just a throwaway account, something in the background of the crucifixion narrative but I always assume everything recorded in Scripture is there for a reason. Here is a man who is justly being crucified under the law of the time and in light of that, rather than demand Jesus save him from his fate on the neighboring cross, he instead pleads with Jesus to remember him when Jesus comes into his Kingdom. What faith! And his faith is not in vain because Jesus makes him a promise that he would be with Jesus that very day in Paradise. There is no mention of him being baptized or attending church or receiving any sacraments or going through new member classes. His simple profession of faith gained him entry into Paradise. He is a troublesome fellow for those who would add works to justification but I imagine that is precisely why his words to Jesus are recorded for us. 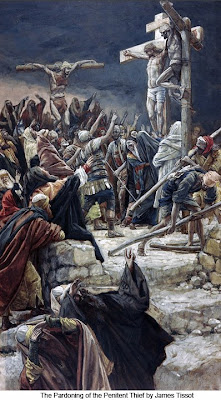 One of the criminals who were hanged railed at him, saying, "Are you not the Christ? Save yourself and us!" But the other rebuked him, saying, "Do you not fear God, since you are under the same sentence of condemnation? And we indeed justly, for we are receiving the due reward of our deeds; but this man has done nothing wrong." And he said, "Jesus, remember me when you come into your kingdom." And he said to him, "Truly, I say to you, today you will be with me in Paradise." (Luke 23:39-43)

There is probably no figure that causes more trouble to those who buy into doctrines like works salvation or baptismal regeneration quite like the repentant thief on the cross next to Christ. He really confounds those who believe in some version of works based righteousness. We see a man who does nothing to merit paradise, just condemnation, one who is justifiably being punished hanging next to one that merited no such punishment. There are many ways he confounds those who insist on works for all or part of their salvation.

His simple declaration of faith

His faith is simple, it is a faith of one who places his hope on the One who can save him. His hope is in spite of the life he lived up to that point, not because of it. When a Christian is saved, he or she is saved despite the utter sinfulness of their prior life. We are saved not by our litany of good works, we are saved by Christ.

His recognition of his own sin

He sees and realizes his own sins, and Christ's sinlessness. It is a recognition of sin that must precede salvation. We cannot be saved until we see why we need to be saved. That flies in the face of a faith+works salvation. The image of the thief is little different than the image of the saved Christian. We are that sinner, a lowly criminal hanging next to His King. We bring nothing to our salvation, we add nothing to our justification but the sin that Christ atoned for.

His salvation requires no action on his part, only His blessing. Nothing else needs to be done. Indeed I think the reason we see this account is to show us that this thief, like us, is utterly helpless. He cannot get down and go do righteous works to show himself worthy of salvation. All he brings is all God demands: a penitent heart, changed by God, that declares Jesus Christ as Lord. That is all we need, and when we seek to add our works to His work we put the cross to shame and deny the Lord.

Something else I love about this guy: He is anonymous. We have no idea who this guy is or what his name is or what kind of life he lived. He was a thief, we know that and that is about all we know. The conversation is not about him, it is about Christ, about Christ being merciful on an undeserving sinner. In a day when “me, me and me” is the new Trinity, when we wonder what God can do for us, when we seek to stand insolently before God and claim our reward based on our works and our righteousness , this anonymous thief reminds us all that each of us has a cross we should have faced, but that in the case of redeemed Christian He faced it for us so that we wouldn't have to.

Whenever you hear someone say that it is our works that save us, remember this lowly thief who brought nothing to the cross but his sin, but today dwells with the Lord in paradise and remember that we can do nothing to save ourselves. That's O.K. though, because Jesus has paid for it all with His blood and that was good enough for this thief and it is good enough for us. Praise God for His mercy and praise God for recording the story of this thief in His Word to set to rest the question of who and what saves us!
Posted by Arthur Sido at 3:27 PM