How The Media Covers Christians In America

More about the SBC convention fiasco. By any reasonable reading the original "anti-alt-right" proposed resolution offered by Dwight McKissic was poorly worded, overly broad in some places and inaccurately specific in others. The annual meeting didn't forward the proposed resolution on the first try and then a second try later when not many people were paying attention also failed. This is what the media was waiting for and they pounced. Here is the headline on my Yahoo! feed from "News"week writer Aidan Quigley:

Well, points to Aidan for his mastery of misrepresentation. As a bonus, the article was headed with this completely unrelated picture: 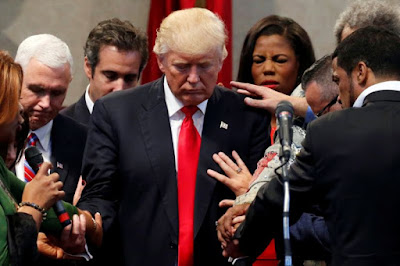 What does Trump have to do with this resolution? Well nothing. Is Trump a Southern Baptist? Nope. Was Trump at the annual SBC meeting? Also nope. Are there actually any Southern Baptists in that picture? Maybe but I don't see one I recognize. So why is there a pic of Trump accompanying this article? The answer is obvious. The media is trying to smear Southern Baptists as a bunch of redneck racists while undermining the Trump administration.

Which is great except that Steve Bannon is not alt-right by any measure nor is he claimed as part of the alt-right. I haven't seen any evidence to support that the alt-right is a significant issue in the SBC. Trump is not alt-right, and if you missed it has a Jewish daughter and is over the top in his support of Israel, not exactly a typical alt-right position.

The media doesn't care about race relations in the Southern Baptist Convention or anywhere else except as a means of selling papers, magazines and online ad revenue. This issue got media coverage because it provided an easy way for the media to take a cheap shot at conservative Christians. They got to drive some page views, make Christians look bad and then get them to jump on command.

Let me let you in on a little secret. Nothing a sincere follower of Christ can do will placate the secular Left in this country and the media is their mouthpiece and often their attack dogs. No matter how many resolutions are passed and denunciations proclaimed, they will still attack and attack and attack. The only way to make them happy is to embrace sexual perversion, reject every single Biblical norm and ultimately deny Christ. So my advice is to stop worrying about the media and start worrying about preaching the Gospel. We can't do anything to change the media's view of us but we can see real people changed by the power of the Gospel we are entrusted to preach.
Posted by Arthur Sido at 11:00 AM