73 years ago today over 150,000 young men, 73,000 of them from the U.S. were dropped from the sky or landed on the beach in France in the largest landing of its kind ever as part of Operation Overlord, or as it is more commonly known, D-Day. Something like 2,500 young American died in that operation designed to drive the Germans out of France and the rest of Europe, an operation that ended less than a year later with the surrender of Germany (followed a few months later in August 1945 with the surrender of Japan). It was the culmination of a conflict that started 31 years earlier in World War I. The combined wars left tens of millions dead in Europe and Asia, many of them civilians and the aftermath saw hundreds of millions enslaved and murdered by Communism. I contend that World War II was a tragic war primarily because it could have been avoided by not having been involved in World War I. Left to their own devices I believe Europe would have come to an armistice that didn't leave Germany in a state that facilitated the rise of Hitler. Maybe that is naive but I still think it is the case.

General Eisenhower penned this letter to the men who were preparing to liberate Europe. I cannot imagine how heavy his heart must have been to give the order to send tens of thousands of young men into a meatgrinder that he knew would take many lives and might not succeed.


Soldiers, Sailors, and Airmen of the Allied Expeditionary Force:

You are about to embark upon the Great Crusade, toward which we have striven these many months.

The eyes of the world are upon you. The hopes and prayers of liberty-loving people everywhere march with you.

In company with our brave Allies and brothers-in-arms on other Fronts you will bring about the destruction of the German war machine, the elimination of Nazi tyranny over oppressed peoples of , and security for ourselves in a free world.

Your task will not be an easy one. Your enemy is well trained, well equipped, and battle-hardened. He will fight savagely.

But this is the year 1944. Much has happened since the Nazi triumphs of 1940-41. The United Nations have inflicted upon the Germans great defeats, in open battle, man-to-man. Our air offensive has seriously reduced their strength in the air and their capacity to wage war on the ground. Our Home Fronts have given us an overwhelming superiority in weapons and munitions of war, and placed at our disposal great reserves of trained fighting men. The tide has turned. The free men of the world are marching together to victory.

I have full confidence in your courage, devotion to duty, and skill in battle. We will accept nothing less than full victory.

Good Luck! And let us all beseech the blessing of Almighty God upon this great and noble undertaking.

It is probably just as well that those young men didn't know that rather than freeing millions of Europeans from the tyranny of the Nazis we would simply allow Nazi tyranny to be replaced by Soviet tyranny for the next half century and that the Europe they bled and died to liberate is slowly surrendering itself to a monstrosity as wicked and godless as National Socialism. What is kind of chilling and something I never read until today was his letter prepared in case the invasion failed. 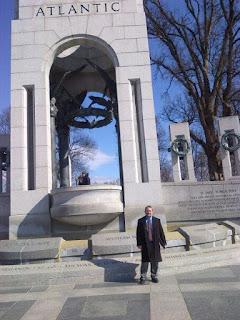 A few years ago when I was still doing the corporate thing I was in D.C. on a sales trip and visited the World War II memorial. There were a lot of very old men, many in wheelchairs or using canes/walkers. It is hard to imagine these feeble old guys as young men charging out of landing craft at Normandy or some Pacific Island in the face of withering machine gun fire, or jumping out of a plane voluntarily. What is even more difficult is imagining our current crop of young men and trying to rally millions of them to do the same today. While they are just movies, it seems that Saving Private Ryan and Band of Brothers capture just a tiny bit of what that must have been like.

The lesson I take from this anniversary is that there always have and always will be been maniacs willing to start wars that others have to fight. Those of us who value human life over power and who cherish liberty have an obligation to do everything we can to stop them. For those who don't have to do the fighting and for those who profit from young men killing each other there is always an excuse to start another war. I refuse to believe that is inevitable.

Email ThisBlogThis!Share to TwitterShare to FacebookShare to Pinterest
Labels: d-day