It is not news that the state of the campus in America is generally reprehensible. From "safe spaces" where "adults" play with toys and watch videos of puppies to hide from opinions they find objectionable to the increasing willingness to squelch objectionable speech using violence, such as at Berkeley in response to Milo Yiannopoulos and at Middlebury during an attempted talk by Charles Murray, and of course the decades long nearly unanimous left-wing political indoctrination that passes for teaching, America's former point of pride, our college and university system, is an intellectual wasteland. What is worse, more and more young adults are being force-fed into the system to support the erroneous narrative that the only path to an even modestly successful life in modern America requires a four-year degree, even though many college bound high school seniors are not really benefited much by four years of additional school and the resulting tens of thousands in debt. 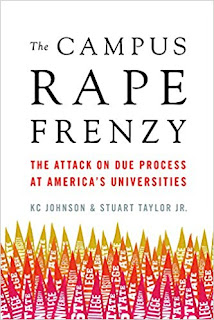 Into the fray comes a new book on a very specific but also very telling topic, the assault on the foundational legal principle of due process in campus sexual assault disciplinary tribunals. Written by K.C. Johnson and Stuart Taylor, Jr, The Campus Rape Frenzy is an often uncomfortable but absolutely vital look at how the hysteria over "rape culture" and the use of bogus statistics has created a nationwide system of kangaroo courts where (overwhelmingly male) students are subjected to a deeply biased process in which they are essentially presumed guilty of sexual assault based on a risible definition of the term.

Johnson and Taylor make their case with a seemingly endless stream of discomforting case studies where, at the very least, male students have been subjected to a tribunal where the deck is stacked against them, tribunals that are secretive, unfair and seemingly designed more to advance a political narrative about "rape culture" than discover the truth. As the authors point out, people at the highest levels of academia and government, including Senators and even the former President of the United States, throw out statistics like the one-in-five college women will be sexually assaulted. If that were true, it would mean that college campuses are far more dangerous for women than even our most troubled inner-cities and in fact are more akin to war-torn third world nations than the cozy liberal cocoons that they really resemble. The authors do a very credible dismantling of that oft repeated statistic and then tie that statistic and other narratives into the lack of due process on our campuses.

What is at least as troubling about the lack of due process facing the primarily male students in our universities and colleges when it comes to sexual assault is that like the "hate crime" hoaxes that repeatedly crop up in our media's breathless reporting only to be debunked a day later and never mentioned again, the labelling of every ill-advised sexual encounter, often fueled for both parties by alcohol, is that it diminishes the impact of actual rape and sexual assault. Sex crimes are awful and need to be treated seriously as crimes, not opportunities to grandstand about "rape culture". From this book and from plain common sense it is obvious that crimes should be handled by the police, not by untrained, agenda-driven demagogues on campus.

If the case made in The Campus Rape Frenzy is accurate, it should give pause to the parents of any college-bound young man. If the book is wrong and our college campuses are actually awash in sexual assault, it would suggest that the parents of any college-bound young woman reconsider letting her go away to school. Anyone who is concerned about basic legal protection, fairness, academic freedom and the rule of law should read The Campus Rape and ask why we are subsidizing institutions that flaunt basic legal protections and specifically target male students.
Posted by Arthur Sido at 1:13 PM