Massive Unemployment And Bribes To Rescind Asylum Applications: Is This Compassionate? 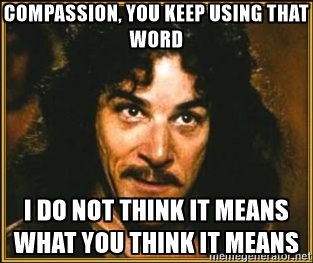 Compassion is a word being thrown around a lot over the last few days. It seems that based on my social media circles it is done so rather carelessly. The prevailing narrative is that Trump's temporary immigration pause from a select group of countries is anti-compassionate and that therefore anyone who doesn't vehemently disagree with Trump is somehow also not sufficiently compassionate and probably not even a real Christian.

I wonder if people have really given thought to what compassion means?
This is the situation in Sweden, a much smaller country than the U.S. but perhaps a canary in the refugee coal mine, from the Express: Sweden sacks HUNDREDS of border guards with NO IDEA of affect on migrant crisis

However those who traveled to the country were frustrated due to a lack of work.

The Government then introduced a scheme to offer individual asylum seekers £3,500 or £8,500 to families if they withdrew their applications and left.

That policy is said to be partially responsible for a record 4,542 asylum seekers invalidating their applications in the first eight months of 2016.

However another key reason is said to be a lack of work for migrants and long processing times as the Government puts the bill of accommodate asylum seekers to £4.8 billion in 2016.
....
Of the almost 163,000 people who arrived in the country fleeing their homes, less than 500 found a job.

If you are doing the math at home, that means that a whopping 0.003% of asylum seekers has found work. I guess Starbucks can't hire 'em all. This is not an anomaly, the same is reported in Germany and elsewhere: mass unemployment which leads to a huge strain on the social safety net and wide-spread resentment on the part of both the refugees and the citizens of the host country, which is a picture perfect recipe for violent extremism of the kind we have seen repeatedly of late in Europe.

Bribes to get out.

Is that compassion? Bringing people into a country that they are ill-suited for and that is ill-suited to receive them, where they cause resentment and strain limited resources? Would it not be more compassionate to help them to resettle in culturally similar nations and to stop engaging in a foreign policy that helps to create the refugee crisis in the first place, which is the situation we are in after 8 years of Bush and 8 years of doubling down with Obama?

Compassion is more than throwing money or ill-thought out "solutions" to a problem. There is a time for immediate relief but the truly compassionate mind looks to eliminate problems, not simply throw a band-aid on them.
Posted by Arthur Sido at 8:25 PM