We were talking this morning about the practice of raising up elders in the church and how our normal process of hiring a "pastor" from outside of the church by luring him with a larger compensation package (we didn't exactly use those terms) contrasted with the practice of the New Testament where elders were appointed from within the local body instead of hired from outside of the local body. Anyway, a couple of days ago Eric Carpenter wrote on this topic in a post titled: "Come Be Our Pastor Even Though We Don't Know You and You Don't Know Us!". Eric made a similar point.


Local churches in the New Testament didn't put together search committees to look through a stack of resumes. Rather, they simply watched the lives of the men in the church. They then recognized men of high character for being what they already were: elders. After they were recognized, they didn't change what they were already doing.

Today's churches have this whole process upside down. It's no wonder that pastors come and go about as frequently as college football coaches do. The hired pastor doesn't know the people and they don't know him. It may work out, but it probably won't. He'll likely stay for 3-4 years, but then move on to "greener pastures."

This mess of a model doesn't work. Churches would be wise to look within. They should be mentoring young men through the years so that when they get older they can take over some of the eldering functions. More important, churches should foster high character from within. Looking outside only leads to the current sad situation we have in our country.

Elders must come from within.

Exactly. This reminds me of the same post I keep re-linking to over and over, not because it is especially good but because I think it touches, however clumsily, on an important point. Raising up elders is hard work, it is time consuming and often frustrating but just because our society values quick, easy and disposable it doesn't follow that the church should. Convenient and disposable is usually unhealthy when it comes to food and it is equally unhealthy when it comes to elders. Commit yourself to the hard work of raising up elders from within, the church will benefit far more than instead spending a lot of time and money in hiring a stranger who will break your heart in a few years when he gets "called" to a better job ministry.


This is an oldie but (I think) a goodie. I first posted this in April of 2009 when we were just starting to rethink the institutional church machine. I recalled it this morning because of a picture someone posted on Facebook, reproduced below: 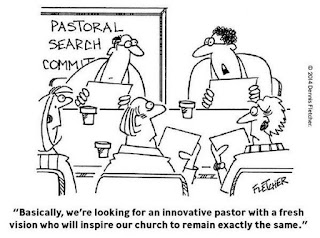 My response to the picture was:

This is pretty accurate although if the church is functioning as it should be there is no need for a "pastor search committee" because the church would be raising up men as elders from within the body.

That got me thinking back to this post. One of the most important and unfortunately often neglected purposes of elders is to equip the church for the work of ministry, and high on that list is the identifying and training of men to be future elders. The reality of churches looking for men to be their pastor/elder from outside of the church, a very common and almost ubiquitous practice, is a sign of a total failure on the part of the church to function as the church should. Let me state that another way. One of the most common and least questioned practices of the institutional church is at the same time one of the most searing indictments of that same model. Anyway read below why home cooking always is better than prepackaged foods.

I was looking over Dave Black’s page and I read through an interesting post called Returning Biblical Education to the Local Church. He brings up something I have mulled over for some time: the inherent problem with hiring men from outside of the local body to lead that local body. That is not the primary thrust of his post but it really got me thinking afresh and asking the question: Why do we seek men who are strangers to come to our local body and lead us? Would we not be better served with men who led us because they came from us? Is a professional, prepackaged minister a better and more importantly a more Biblical man to be an elder? Dave obviously doesn’t think so and neither do I…

“Clergy” becomes a whole way of living, an ecclesiastical subculture. The church, however, predates the seminary and will outlast it. The book of Acts reminds us that the earliest church leaders were homegrown nobodies. They were not parachuted in from the outside with all of the proper credentials. They were already full participants in their congregations – they had homes, they had jobs, and they had solid reputations. If at all possible, I think we too would do well to train people for leadership in our local churches, equipping them for evangelism and other ministries, thus complementing the work of our seminaries and Bible colleges. The early church knew that leadership is best learned by on-the-job training, not by sending our most promising leaders off to sit behind a desk.

I think this phenomena of professional ministers is a product in large part of two factors. First, we are a country that by and large draws its identity from Europe and with her state sponsored churches, professional clergy is part of the fabric of the society. Second, and more importantly, we are Americans. We live in a prepackaged, processed, microwave age. Sure home cooked meals from scratch taste better and are better for you, but it is such a hassle! I can spend an hour or two cooking up a nice meal for my family (and even that requires pre-cut meat, canned veggies, boxed side dishes) or I can get some pizzas. In my family we get pizzas or something similar pretty often and in families where both spouses work it is even more common. We want it quick, easy and disposable.

The church seems to think the same way. Training and raising a man up within the local body who can grow in knowledge and maturity until he is ready to lead as an elder takes a long time and is hard work. It may not always work out, he may move, he may lack the aptitude for it, he may turn out to not be a very good elder. It is a whole lot easier and faster to find someone who already is “qualified”, i.e. has a seminary degree, who we can interview and “call” to ministry. Of course he will probably have to move and so to entice him we need to pay him. If he were already a part of the congregation, he would have a job and a home and ties to the community. He would know and be known by the local body because he is a part of that body. They would know him and his wife and his kids, and that would make it possible to know if he meets the qualifications for an elder listed in the Bible instead of meeting the resume credentials that are often the entry level for being considered to be a pastor. It makes more sense and it is more faithful to the Bible to raise leaders up internally but that just takes too long. So instead, church after church hires strangers to come in to lead and love people they have likely never met. It only adds to the separation between the clergy and the laity to have a paid professional come on the scene. Hard to believe with that great set-up that so many men leave the ministry, that churches have such high turnover in pastors and the men who stay are often frustrated and burned-out. When you view the pastor as a paid professional, someone hired and brought in from the outside, why not get rid of them? Paid, professional clergy are employees and as such they are disposable. A church can always find someone else to pay to lead them. On the flip side, when ministry is your job you can understand why men leave church A with 100 members for church B with 250 members. If you are from within the congregation and not getting paid, why would you leave? It is not a job, it is truly a calling.

Just because we live in a quick, easy and disposable society doesn’t mean that is how the church should operate. It is certainly harder, more time consuming and more sacrificial to raise up leaders in the church but I believe (and I think the Bible supports) the idea that a primary responsibility of the local body is in the training and support of men from within that body to lead that body. Seminary may be a part of that training, but it is only one part of an integrated development of leaders, not an end in and of itself. Hiring pastors like an old western gunslinger to come in and clean up the town before moving on is an injustice to the local body, to those men and their families. We need to take the time to look around the cupboards, find the ingredients and whip up some home grown elders.

Email ThisBlogThis!Share to TwitterShare to FacebookShare to Pinterest
Labels: elders, pastors, the church