I am often critical of the U.S. of A. around these holidays. Critical of the state of our people, of  the freedoms squandered and lost, of the triumph of envy and resentment, of our history filled with foolish wars, of the entanglement of the church with civil religious and unequal yoking with unbelievers and rank heretics for political power. I have lots of negative stuff to say. After all America is the worst nation that has ever existed...

...except for all of the others out there now and that have ever been.

You see I love this country, far more than I probably should. I love the diverse people who throughout most of our history have come from near and far, maintaining their culture and heritage but also eagerly making their Americanization their most important goal. There was once a time when being an American was far more important than being an Asian-American or an African-American. For hundreds of years America has held a promise, an imperfect one in so many ways, but a promise nevertheless that if you came to our shores, learned our language, followed our laws and worked your hardest you could make a better life for yourself, and even more importantly for your children. Millions of people came here to sacrifice their own comfort for the sake of their children and for hundreds of years that promise was fulfilled in generation after generation. The "New Colossus" sonnet that is found at the Statue of Liberty contains the immortal words that have drawn people from around the world: 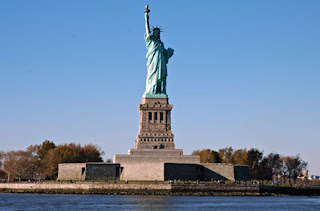 Not like the brazen giant of Greek fame, With conquering limbs astride from land to land; Here at our sea-washed, sunset gates shall stand A mighty woman with a torch, whose flame Is the imprisoned lightning, and her name Mother of Exiles. From her beacon-hand Glows world-wide welcome; her mild eyes command The air-bridged harbor that twin cities frame.

"Keep, ancient lands, your storied pomp!" cries she With silent lips. "Give me your tired, your poor, Your huddled masses yearning to breathe free, The wretched refuse of your teeming shore. Send these, the homeless, tempest-tost to me, I lift my lamp beside the golden door!

The promise of America is why so many have come here and so many still seek to come here, once largely from Europe but now from all over the world, Mexico and South Korea and India and Burma. They come for the same reason that my forefathers came from Poland and Ireland, for the promise of freedom and opportunity.

I love how diverse our landscape is, from the teeming cities that sit on oceans and lakes to the tiny burghs that barely show up on a map. No other country can boast our diverse landscape, from the lush sub-tropics of the southeast to the forests and lakes of the north, the deserts of the southwest and two incredible mountain ranges that bisect the country from north to south, the Appalachians in the east and the Rockies in the west. In this country you can fly around in a day and go from skiing in the mountains to sitting on a sunny beach all in the same day.

There is to me no country quite like America, a land of deep faults and scars but the land that beckons the downtrodden, the poor, the hopeless. I am critical because I know that in spite of our warts and national shame's this land offers to the world something no other nation does. We can be better. We have been better. For the sake of our children and indeed of the world we must be better.

No one sings it better than Neil Diamond. Happy birthday America!

I'm sorry to come back with a negative note,BUT,"this land offers to the world something no other nation does". Really?

Having spent time in the USA, I beg to differ! By the way I'm not particularly patriotic:)