If He Didn't Say It Then Don't Say He Said It 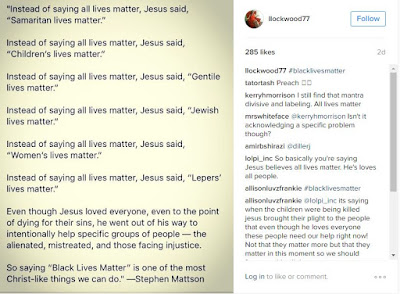 That is great except Jesus didn't actually say that. Any of it. Nor anything vaguely like it.

Here is a good rule of thumb. Jesus said lots of stuff that was not recorded (John 21:25) but what was recorded was preserved for a good reason. We have a pretty tough time comprehending what Jesus did say without trying to make Him say stuff He didn't say. So to say that "...saying "Black Lives Matter" is one of the most Christ-like things we can do" is the statement of someone who doesn't apparently know anything about Christ, at least not the real Christ. Jesus wasn't a "social justice" warrior in the contemporary sense of "social justice". He wasn't driven by identity politics. His Gospel was universal. The asinine picture above is an attempt to co-opt the King of creation as a tool for a political agenda that has nothing to do with the Kingdom. I have no doubt that Jesus thinks that  the lives of image bearers with black skin are precious, as much so and not less or more than image bearers with white skin or any other skin color. Jesus came to die to save an elect people from every tribe and nation and people, not to divide people up by skin color to pander to one over another or to become a form of slogan to push an agenda.

Too many people use the name of Jesus as a talisman to give credence to their secular cause. They never let Jesus speak for Himself or to even be silent. They simply say whatever it is they think and then invoke the name of Christ without so much as asking if He was on board or not. Saying that parroting "black lives matter" is one of the most Christ-like things we can do is to demonstrate that one has no idea what Christ is like.

The question of race, of excessive force by police, etc. is complicated and fraught with enough confusion, mistrust and misunderstanding as it is. It is completely counter-productive to try to force Jesus into a particular political fringe movement and claim that He has endorsed it. If your argument can't stand on its own without a clumsy and exegetically ludicrous attempt to enlist Jesus as your spokesperson, it probably is not a very good argument.
Posted by Arthur Sido at 12:35 PM