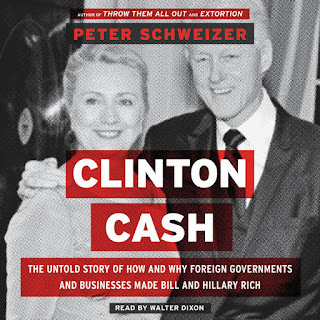 It is no revelation to point out that most politicians seem to be at least a little crooked. Maybe not overtly but certainly influenced by those who fund their campaigns and in turn those they extort money from for political favors. The entire American system of government is a huge cash cow and there are plenty of people lined up to get a piece. Even in a corrupt system there have always been those who have taken it to a new level, some who get caught and many others who never do. At the top of this festering pile of corruption there stands a pair of political hucksters like no other, one a former President and one who has a very decent chance to be the next President. No one has learned to game the system and avoid prosecution quite like Bill and Hillary Clinton.

Enter Peter Schweizer, author of Extortion (see my review here) with his new, heavily documented book Clinton Cash: The Untold Story of How and Why Foreign Governments and Businesses Helped Make Bill and Hillary Rich. This is a convoluted tale that reads like a somewhat predictable summer thriller, full of shady characters and international intrigue but sadly this is not fiction, it is the record of two people who claimed to be "dead broke" before parlaying their extensive influence, foreign fan base and continuing position of power in the heart of American politics to enrich themselves beyond the imagination of most people. Worse, as Schweizer shows conclusively, this personal enrichment came not from domestic sources but largely by using Hillary Clinton's position as Secretary of State to apparently trade U.S. foreign policy favors to foreign nationals, often of the most unsavory kind. As Schweizer alludes to, it hardly seems that there is a nefarious Third World dictator that didn't purchase influence from  the U.S. government by paying Bill Clinton exorbitant speaking fees (half a million dollars and up) or by enormous contributions to the Clinton's "charitable" foundation which appears to be little more than a way to funnel money around the world and provide employment to former Clinton staffers and loyalists.

What was perhaps the most infuriating was the chapter on Haiti. Having been to Haiti and caring deeply for the people there, I used to have some respect for the Clinton's for their apparent concern about the nation and people but from what I read in this book it looks like Haiti was just another way for the Clinton's to sell influence and gather wealth and power.

I doubt many people will care about this. Those who will read it already are unlikely to vote for Hillary anyway and her rabid "it's time for a woman president no matter how dishonest and corrupt!" fans in the media and popular culture will do their best to squelch this, just as they have so far managed to do with her Byzantine system of hiding and then selectively releasing emails sent and stored away from the prying eyes of the few reporters still out there and out of range of the Freedom of Information Act. I do hope that some people who think of Hillary as a champion of the middle-class and someone who can trusted to be the leader of the free world will at least give this book a chance. What is detailed is not surprising but it is still shocking and proof that the most powerful couple in politics have no shame and no concern over being caught. Thus far they have been proven correct as their corruption, influence and wealth spreads.
Posted by Arthur Sido at 7:39 PM