Book Review: Elders in the Life of the Church

If there is a topic that needs a lot more study and discussion in the church, it is elders. What are they for? 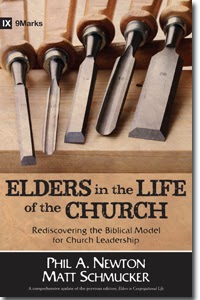 How do they function? How should they be chosen? How many should a local congregation have? Many churchgoers have no idea what elders are all about or that they appear so frequently in the New Testament and our lack of understanding is crippling to much of the church.

Phil Newton and Matt Schmucker attempt to answer these questions from a decidedly baptistic perspective in their joint effort, Elders in the Life of the Church: Rediscovering the Biblical Model for Church Leadership from Kregel Publications. That they are Baptists is critical to understand as elders are usually thought of as a "Presbyterian thing". Many Baptist, especially Southern Baptist, churches operate with a "Senior Pastor and a bunch of deacons" style of governance, so the advocacy for a plural elders style is quite unusual and often seen as a threat. They tackle the topic with a back and forth style, alternating chapters between Phil and Matt with Phil penning more "theoretical" chapters that dig into the Scriptures more heavily with Matt providing more "practical" chapters on how this looks at Capitol Hill Baptist Church in D.C. where he is on staff and home to Mark Dever and 9 Marks Ministries. Phil Newton is someone I am quite familiar with, back in the day when I was doing a series "preaching" through the book of Acts I turned to his series on Acts before I completed a single sermon as he had far and away the best treatment of the book from a Reformed and Baptist perspective. I am pretty familiar with Matt as well, mostly from disagreeing with what he publishes online! More on that in a moment. The "back and forth" style rarely works well but I thought this book pulled it off. I did find myself starting to skim Matt's chapters to get back to Phil but even so the transitions were pretty smooth. Even a cursory reading would show that these two brothers in Christ are earnest and serious about this topic and did a great job in making their argument. However, even a great argument can be wrong on many levels.

This is a book I would summarize as "oh so close and yet so far away". So close because both Matt and Phil (mostly Phil as he has the more substantive chapters) understand the importance of elders and have done the hard work of both deeply researching this topic from Scripture as well as living out life in a plural elder setting. So far away because they simply seem incapable or perhaps unwilling to step away from the institutional church paradigm. They never address, much less challenge, the notion that some elders are "called to preach", i.e. deliver a weekly sermon or two, and that they should be paid while others should labor in the church free of charge like Paul. They assume that a paid "senior pastor" can be "first among equals" when that very idea is self-contradictory. I can't imagine anyone at Capitol Hill Baptist confusing who has more authority, some random guy on the elder board or famous pastor Mark Dever. So much of the book caused me to furiously jot notes in the margins to the point that I found myself looking more for what was wrong than what they were trying to say. Elders in the church should be the very antithesis of the institutional style of religion rather than key players in perpetuating the system.

The strongest chapter by far was the last full chapter on the topic of Leadership Development in Hard Places, looking at elders in the church in the "less Christian" parts of the world where the supposed "benefits" of our Western religious system (like professional clerical training via seminaries) are absent. The ideas presented in this chapter were largely on target. There is a real danger in trying to replicate Western style "church" in developing nations where it makes no sense. When I was in Haiti it was jarring to see a pastor wearing a suit and tie when in their culture that was so incredibly out of place. On the other hand they also recognize the serious danger of the frenetic church planting movement, where "converts" by the hundreds are made and left to fend for themselves, devolving inevitably into syncretism and heresy. Recognizing, training and supporting indigenous leaders is critical to healthy evangelism but "spent three months ministering alongside 5 men to help them understand critical doctrines" is not nearly as sexy as "487 baptized in one day!" reports back to the states, and those reports are what keep the money flowing.

If you are comfortable with the institutional church paradigm and curious about elders, especially in a plural setting, you will find this book very useful. I would rather see a plural elder led institutional church where godly men labor side by side in the ministry than I would a single pastor "one man show" institutional church. Plural elders is a step in the right direction. Having said that I believe the same study methods used to arrive at plural elders, taken to their natural conclusion, lead one to reject institutionalism as a man-made religious invention. Not many who read this book will agree and sadly not many who reject institutionalism in the church will read this book. In spite of the flaws it is still a well researched and thought-out book. As the church we need more discussion and study on this topic so my appreciation goes out to both Matt and Phil for their effort.

Perhaps Dave Black could pen a new book on this very topic as a follow-up to his Seven Marks of a New Testament Church? What say you Dr. Black?!

I received a copy of Elders in the Life of the Church free of charge and with no compensation from Kregal Academic in return for publishing an unbiased review.
Posted by Arthur Sido at 9:32 AM

It doesn't sound like this book is much different than "Biblical Eldership" which also fails to acknowledge the full significance of Jesus words "no exercising authority" . All traditionalists reinsert exercising authority with the bogus translation "elders who rule...", "obey your leaders" and a few other misc verses that can be twisted to insinuate authority is necessary. Since 99.9% of institutional leadership will never "fully train" anyone to "be like them" Luke 6:40 and will never "entrust to faithful men" anything they do 2 Tim. 2:1,2, there may may never be anyone who questions the scripture twisting.

I just finished a lengthy dialogue with one of the elders in our fellowship challenging their basis for wearing titles, reserving teaching in the worship hour for only elders, and cutting off all the rest of the saints from decision making. I showed them every Biblical fallacy they used and am waiting to hear back and praying for God's peace to rule in their hearts as they consider the Word.

I think it would have been good in your review to show at least one Biblical fallacy used in the book.