I finished Twelve Years A Slave last night. This work which has been made into a critically acclaimed movie is the autobiographical story of a free black man from New York, Solomon Northrup, who was kidnapped and sold into slaver. The Kindle version I bought for $.99 also includes 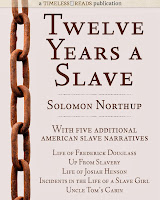 5 other classics of the era like Uncle Tom's Cabin and Life of Frederick Douglass.

The initial impulse, at least of a white middle aged man in Indiana who has known nothing but respect and comfort for four decades, is "why wouldn't he just say who he was"? As you read you come to realize that for a black slave in the 19th century, claiming your rights was a sure ticket to a whipping or death. As the story unfolds you see very clearly how helpless Solomon Northrup, known as Platt as his slave name, truly was. In America. The land of the free and the home of the brave, a nation that prides itself on our belief that all men are created equal and endowed with unalienable rights to life, liberty and the pursuit of happiness.

The entire book screams out a sense of wrongness.  This is not America, this is not the country we pledge our allegiance to, that we cherish, that we kill and die for. But it is. We still suffer from the repercussions of a nation that was built on the scarred backs of millions of slaves who received unimaginable treatment, both physically and emotionally, by being reduced to little more than clever animals to be used and discarded like any other livestock. Maybe it is because I grew up in the North and we were the "good guys" in the Civil War that I can look at slavery as something "we didn't do". No one in my family, as far as I can tell, ever owned slaves but I still live in a country where it was tolerated and blasphemously defended from a false reading of Scripture.

The language is some places is foreign, written in the manner of speech from 150 years ago, but the narrative flows smoothly and it is a pretty easy read. Solomon is an excellent story teller and his anecdotes about little inventions and small pleasures amidst the brutality of slave life make for pleasant breaks to the unrelenting story of misery and dashed hope. Even knowing the outcome (the book title tells you the exact time frame of his captivity) one cannot help but despair of Solomon ever regaining his freedom and being reunited with his family. One thing that really stuck with me, and we will see how the movie handles it, is just how devout Solomon and his fellow slaves were. The faith of the slave population and the way various "masters" handled faith themselves provides  a interesting subplot. You cannot overestimate the impact of their faith for slaves and it makes me wonder how modern day Americans of any race would fare under similar circumstances.

Twelve Years A Slave is an excellent work worthy of reading. It is troubling but the reality of this part of American history is crucial to understanding many of the issues we have struggled with since the Civil War. At only a buck or free from the library this is a work more people should read.
Posted by Arthur Sido at 11:31 AM