Industrialization In Farming and The Church

As we look back to the period of time we would call the ancient world and especially the Biblical era covering the New Testament we see a society and culture that is highly agrarian. This is reflected in the New Testament as well as the Old. 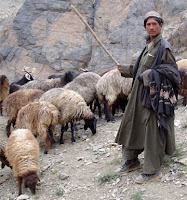 The Bible is chock full of agricultural stories and farming is a common metaphor for relationships in the church. One need look no further than Jesus Himself who is the Good Shepherd and likewise we are described as as His sheep and His flock. He is not The Good Factory Owner and we are His units of production or The Good Attorney and we are His paralegals! He is also the true Vine and the memorial meal celebrating His atoning sacrifice is represented by the most basic elements of the ancient harvest: bread and wine. The more you read of the New Testament, especially the Gospels and the teaching of Christ, the more you see how agriculture is an irreplaceable living out of Biblical principles. There is a very particular pattern of planting, tending and harvesting that dominated the culture of the world for most of human history and those patterns and seasons were instituted by God, something that ties His people to His creation.

My how things have changed from the days when Jesus described Himself as the Good Shepherd to an audience that would have understood that idea. In ancient times farmers and shepherds were intimately connected to their animals and the seasons. They cared for their animals and the entire system was part of an interconnected whole. Granted it was a very hard and decidedly unglamorous life. but everyone probably knew or at least knew of a shepherd and much of the population was deeply engaged in the production of food. 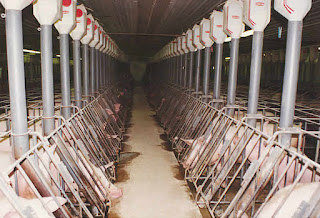 Today? Animals in agricultural systems are mostly units of production. Roll them in, confine them, keep them alive and cram as much weight on them as possible via drugs and unnatural diets. We have neighbors who raise hogs on contract and another that raises dairy steers on contract. They truck them in, feed them up and ship them out, all completely removed from the birth, life and death cycle of farming. The unnatural rates of growth and uniformity are completely contrary to nature and yet they are not only accepted but demanded by consumers. People like to buy a package of homogenous chicken breasts that are completely indistinguishable from one another no matter how unnatural that obviously is. "Farmers" on large scale operations believe themselves forced to conform to the prevailing wisdom: more genetic manipulation, more chemicals, more antibiotics, more confinement, more conformity. Farming has turned into manufacturing with meat and grain as the output.

Even grain farming has lost much of the connection with the land. Certainly the seasons are still crucial but so much artificial engineering goes into it that the normal patterns are lost. Because the land is unnaturally drained of nutrients and those nutrients are not replaced, chemical fertilizers are sprayed over the land to sustain the unnatural yields and patterns of monoculture crop farming. Even stranger, most of what is raised via farming today is inedible. We are raising historically unthinkable amounts of "food" that you can't eat! When you start to look at the true cost of food production, from government subsidies to dead soldiers defending our source of "cheap" petroleum, you realize that this "cheap food" costs us a lot more than what we see on the price tag. I have been reading Michael Pollan's The Omnivores Dilemma and if you can overlook his devotion to the religion of evolution it is quite an eye opener, a good follow-up to Joel Salatin's Folks, This Ain't Normal. Where we are, food wise, is a completely unnatural, artificial and I believe unhealthy system where we are eating stuff that sort of looks and smells like food but is nothing like what God intended.

To make matters worse, there are lots of forces arrayed to keep people from asking questions. Land grant universities reliant on donors for funding are the intellectual drivers of much of our food production and are by and large completely on board with industrial agriculture. Federal agencies that enforce laws at the end of a gun that rarely make sense, laws influenced by lobbyists from the huge ag and food companies that make it hard to get outside of the system. International food conglomerates have a myriad of ways to market their wares to families that are already run ragged by our never ending treadmill chasing "success", so busy parents become natural consumers of industrialized food. Since no one is encouraged to think about where their food comes from, no one does because we are distracted with a million other things.

In much the same way that farming and food has become almost an afterthought in our culture, so has the church within the church. Instead of ingesting mounds of empty food calories packaged to be as convenient as possible we consume empty religious calories. Sure there are some worthwhile parts of industrialized religion but the empty religious calories that come with it are definitely unhealthy. When we compare the life of the church in the New Testament, we see community, we see family. The church was marked by lives lived together, by sharing materially and financially, laboring together and loving one another even in the midst of persecution that few of us can imagine. Today? By and large Christianity is marked by power struggles, territorial ism and competition, greed and hypocrisy and heaping helpings of religion and tradition.

Nowhere is this more true than in the "worship service", the sugary religious equivalent of a super sized Big Gulp of Coke. It is syrupy sweet to be sure and gives you a bit of a rush but pretty soon you need to empty your bladder. It does very little to nourish or strengthen you, it just gives you the feeling that you are full. 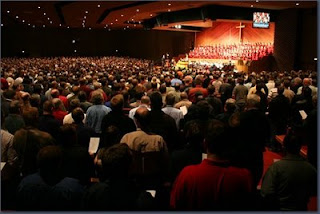 What we are left with looks like "church" just as a Chicken McNugget looks like "food" even though it has three dozen ingredients and only one of them is chicken. We think it looks like "church" to us because we don't know what church is supposed to look like and we think that Chicken McNuggets are food because we have had the food raising process removed from our daily lives. No one kills and cleans a chicken, they buy homogenous boneless, skinless chicken breasts without a thought that chickens naturally have skin and bones. Little wonder that our zeal for evangelism, concern for the poor and theological foundations are a pudgy and weak as the average American who survives on a diet of processed foods.

Like the food industry, the religion industry has many entrenched interests that strive mightily to shush critics, to squash questions and keep people shoeing up in their religious veal pens known as pews, putting money in the plate and smiles plastered on their faces until they get back in their cars after an hour.

I don't blame vocational "ministers" for the way things have devolved just as I don't blame the average large scale industrial farmer. I don't know any industrial farmers twirling their mustache while evilly cackling and coming up with new ways to make unhealthy food. Nor do I (personally) know any vocational clergy who are trying to do the wrong thing. They are just stuck in the system and seeing outside of industrialization in farming and ministry is pretty difficult.

Industrialization has made food and religion cheap, convenient and easy. We once thought this was a sign of progress. Today I am not so sure. Raising food, making meals from actual food, etc. is time consuming but many people nostalgically look back to meals from scratch because they are simply better. Being part of the family of God more than just the times listed in your bulletin, being a participant, not waiting for the "experts" to handle everything is certainly messy and scary and difficult but it also is better. It is always more satisfying to make a meal at home than to get a bag of burgers and fries from a window and it is still always a richer experience when you get outside of the traditions of man.

When it comes to food and the church, two of the great gifts of God, industrialization can never replace home cooking!
Posted by Arthur Sido at 6:05 PM

"They are just stuck in the system and seeing outside of industrialization in farming and ministry is pretty difficult."

You are so right. From my own experience, there is an obvious and glaring example of why they are "stuck in the system".

They have an unconscious, but false, assumption that "the system" must not be questioned. That is reinforced by the open disapproval they receive from their peers, if they dare to question or disagree.

Even worse, they know that the system has well proven mechanisms (some very questionable) to cause them to cease to question or resign.

John, I have seen many of the same things in both farming and the church. Just keep doing things the way you are told and don't ask any questions.