In a somewhat odd encounter in the book of Acts, God does something pretty spectacular. In chapter 10 of Acts He sends Peter a vision of all sorts of "unclean" animals on a giant sheet. At this point it is easy to go "Um, OK...." and kind of move on. Lizard on a giant bed sheet sounds like a Geico commercial not an important event in the establishment of the church and the expansion of God's covenant to include believing gentiles as well as Jews. Here is the passage:

The next day, as they were on their journey and approaching the city, Peter went up on the housetop about the sixth hour to pray. And he became hungry and wanted something to eat, but while they were preparing it, he fell into a trance and saw the heavens opened and something like a great sheet descending, being let down by its four corners upon the earth. In it were all kinds of animals and reptiles and birds of the air. And there came a voice to him: "Rise, Peter; kill and eat." But Peter said, "By no means, Lord; for I have never eaten anything that is common or unclean." And the voice came to him again a second time, "What God has made clean, do not call common." This happened three times, and the thing was taken up at once to heaven. (Act 10:9-16) 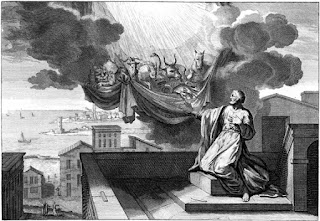 When Peter goes to the house of Cornelius, he says something pretty exciting to him: "You yourselves know how unlawful it is for a Jew to associate with or to visit anyone of another nation, but God has shown me that I should not call any person common or unclean" (Acts 10:28). The declaration "What God has made clean, do not call common." really struck me as so important. Peter makes clear that this is not just about unclean animals. I see it applied to people that God has redeemed. Do we see other Christians as really brothers and sisters, part of a select people and chosen nation (1 Peter 2:9)? God via the work of the Holy Spirit and the shed blood of His Son has made from the many nations, Jew and Gentile alike, one people for His own.

Do we still see some people as "common" or "unclean"? Even if we don't say that we do, do we show them by our actions that we consider them somehow unworthy or unclean? I am not talking about a homeless guy or a snot nosed child in dirty clothes. I am talking about other Christians. We must because we have erected barriers within the church that effectively keep the "wrong sorts" of people out. I have certainly been part of this in the past and I have been on the receiving end more recently.

These barriers are very real but well hidden behind appeals to "the truth" or "orthodoxy', dressed up in flowery language plucked from confessions and creeds. When someone starts off a sentence with "Not that I am saying you aren't a Christian..." what follows is almost certainly going to suggest that very thing or at least that if you are a Christian that you are the wrong sort and therefore need to get your act together to join in our reindeer games. Let me be uncharacteristically blunt.

If your most cherished traditions, no matter how precious they are, serve as a barrier to fellowship with other Christians or an impediment to evangelism, then they are by definition not Biblical.

Let that sink in. We toss about the term "Biblical" for all sorts of things that are found nowhere in the Bible (another post on that subject will appear later today). We especially like to tack it on to our traditions to make us feel better about them and more justified in using them like a club.Yet if what we are claiming to be Biblical is not only not in the Bible but actually contrary to the Bible, doesn't it follow that it cannot be Biblical?

Anyway my point is this. Jesus decides who is clean or not, who is in and who is out. We don't. Even in the case of sin the purpose of discipline is to restore that brother but we never see the church declaring that some believers are second class citizens based on which denomination they belong to or their clothing style or any of a myriad of traditions that we use to divide up the sheep. His sheep are His sheep and rather than finding ways to continue to divide them up we ought to be concerned with finding ways to bring them together, even when that means discomfort for ourselves.
Posted by Arthur Sido at 11:46 AM