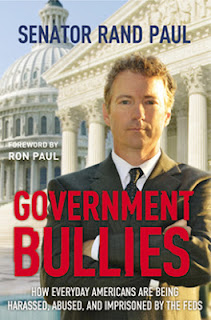 I received Senator Rand Paul’s new book, Government Bullies, yesterday and read the whole thing today while, ironically enough, travelling all day and being greeted by the friendly neighborhood government agents of the TSA, those stalwart folks making travel not at all safer and immeasurably more unpleasant for all Americans. Senator Paul is on the list for potential candidates for President in 2016 if Romney loses in this election and this book is obviously his opening salvo.


First, the negatives. Senator Paul tends to be pretty repetitive in many places. I felt as though I was reading the same thing over and over in places and in a few I am sure I read the same thing more than once. The editing is not great. Most annoying Senator Paul spends a lot of time referencing the various legislation that he has put forth. After all he is a politician and he clearly has aspirations beyond the Senate seat from Kentucky. All in all this is not a great work of literature but it really isn’t intended to be.

The gist of Government Bullies is a recounting of a litany of simply outrageous abuses of government power by unelected and unaccountable government bureaucrats, many armed to the teeth with guns and all armed with the nearly limitless power to make life miserable for average citizens for any or no reason at all. Each successive event that he records is more egregious than the last. A co-worker travelling with me couldn’t even finish one chapter before he became so upset that he had to put the book down.

From groping airline passengers who have given no indication of being a threat to arresting and imprisoning citizens for moving dirt on their own property to early morning armed raids on Amish famers for selling milk, Government Bullies paints a picture of a government out of control. Certainly the examples he gives are the most extreme but the fact is that I read this book while traveling today and was required to remove my belt, my suit coat and my shoes before the TSA would permit me to fly on the plan that I had purchased a rather expensive ticket to fly on, a transaction between me and a corporation. We have our own cow that produces milk but that milk is viewed as a dangerous substance that can lead to my arrest if I sell it, as if milk is analogous to meth.

Government Bullies is like a repetitive punch in the stomach and a rude awakening for those of us with an overly nostalgic view of America as the land of the free. As Senator Paul is careful to point out, things are better in America than they are elsewhere around the world but we have strayed far indeed from the vision of the Founding Fathers and the principles that this land was supposed to be founded on.

If you can read this sort of stuff and not be outraged, you aren’t really paying attention. In the name of “security” Americans have been trading liberty and freedom for a false promise for decades and the pace of this surrender is accelerating. From economics to “the war on terror” to knee jerk reactions to any event, we have as a people been far too willing and eager to turn over more and more of our lives to our benevolent overlords in Washington D.C. A chip off the old block and following in his father’s distinguished footsteps, Rand Paul is a voice demanding that we stop the madness before it is too late. Of course it might already be too late.

(you can also check out the Government Bullies webpage!)
Posted by Arthur Sido at 9:34 PM