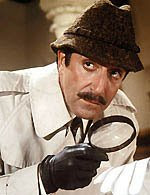 (definition: an exclamation of complete surprise)

The French elected a "pro-American" guy as their new President, Nicolas Sarkozy. First off, I didn't know there was such a beast as a pro-American Frenchmen, at least not without the presence of German troops in Paris. Sounds like this guy realizes that things need to change in France before it degenerates any further into economic depression and general lawlessness. I will admit that I will miss old Jacque Chirac and his mindless anti-Americanism. Maybe there is hope for Europe after all...
Posted by Arthur Sido at 10:36 PM