The Election That Never Ended 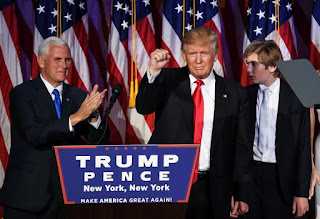 One year ago on November 8th, 2016, the day started as so many other election days have for me since my earliest recollection of an election, the 1980 landslide of Ronald Reagan that I watched with my die-hard Democrat grandparents (they didn't have a good night). As I have in every significant election since I turned 18 I went to the polls and as I have in most elections since 1992 I went to the polls with my wife. I cast my vote for Gary Johnson, as I did in 2012, because I simply couldn't pull the lever for Trump, partly for reasons of character and partly because he just isn't terribly conservative in any traditional sense, although in the last twelve months I have found myself less and less identified with traditional conservatism as well.

I am a pretty skeptical/cynical person on almost any topic and especially when it comes to the media but I admit I bought into the polling data. It was so overwhelming and so uniform and I have such a low opinion of many of my fellow Americans that I assumed that a woman who should be on trial would instead be elected and become the first female President of the United States. I actually was feeling kind of poorly that evening so after dinner I went upstairs to lay down for a bit but my wife and kids watched the returns. I came back down late in the evening when things were a toss up still and we watched the returns on the network news and PBS as well as on the internet. Watching the mostly leftist media talking heads slowly melting down online was pretty funny and at the end of the night, in the middle of the night in fact, I watched the Trump victory speech.

What has transpired since has been nothing less than surreal. The pundits who assumed Hillary would win warned about the danger of violence from Trump supporters when he inevitably lost and a refusal to accept the results in spite of the evidence to the contrary. Since the election there has been plenty of denial, hysterics and violence but it has been almost entirely one-sided from liberals/progressives. From the rise of the antifa to the Jill Stein led recounts to the endless searching for any ties between Russia and the Trump campaign to the relentless negative press and made up stories, culminating recently in the blatantly edited video of Trump dumping food to koi immediately after the Japanese Prime Minister did the exact same thing, the assault on Trump and the electoral process has been vicious and unending. The difference between the way Trump supporters and others on the Right view the election results and the way progressives and far Left voters view it is proof positive that we live in different worlds. We have experienced some of this with family members "unfriending" my wife and I on Facebook because we didn't support Hillary and our experience is far from uncommon. The nation is incredibly divided and ironically but not unexpectedly that division is being driven by those most likely to call Trump divisive.

From calls to arbitrarily abolish the electoral college to articles of impeachment being drawn up for no other reason than political posturing, not to mention the endless primal screams for attention from Hillary Clinton who unsurprisingly lacks the grace to quietly accept she lost and move on with her life, we are in a Ground Hog Day scenario where the election seems to be replayed over and over.

A year later the election is still contested in some corners, like the ridiculous fail last weekend where the antifa were going to come charging out of their parent's basements and overthrow the "Trump regime" which ended up being a handful of tiny protests that no one paid any attention to. There has been a great deal of political violence, again almost entirely from leftists. People were assured that the rise of Trump would lead to a wave of "hate crimes" and when that didn't materialize we have instead been treated to a lengthy series of hoax hate crimes that are breathlessly reported on by the media when first announced and then conveniently forgotten once they are shown to be self-inflicted or otherwise hoaxes.

Meanwhile the Trump presidency has been what you would expect. Twitter fights with people, brashness, chaos. What I didn't expect but should have is how much pushback Trump would get from other Republicans like Mitch McConnell and Jeff Flake not to mention faux-conservatives like Bill Kristol and most of National Review. I figured the Left would fight Trump tooth and nail but I didn't expect the level of petty suicidal political shenanigans from the GOP. It is apparent that many Republicans like the former Presidents Bush would rather have had a liberal Clinton White House as long as she didn't upset the establishment apple cart. If nothing else Trump deserves credit for exposing as phonies most "conservatives" in D.C., plus his nomination of Justice Gorsuch to the Supreme Court who appears to be a slam-dunk.

While most of the elections since last November have gone the way of conservative and populist Republicans, Democrats did win the governor's races in blue state New Jersey and in Virginia last night, both races that would have been easy wins but for the ridiculous truck video in Virginia. The media has been desperate for a win to pronounce a backlash against Trump and I am sure they will latch on to two elections that were almost a given to say "See, see! People are turning against Trump!" when in reality the same people that told us Hillary had a 90%+ chance of winning the day of the election are also telling us that people they clearly don't understand and truthfully despise are turning on Trump. Color me skeptical.

The real test will be next November when a ton of vulnerable Democrat Senators are up for re-election including my own Senator trying to win reelection in a state with essentially no state-level Democrat elected officials. If it goes as I expect, we should see a substantial gain for the GOP in the Senate which would be better news if Mitch McConnell wasn't the majority leader. If Trump has a larger majority in the Senate to work with and the economy keeps chugging along, and if we get the wall built and avoid any new wars, I think Trump is in a good position to be re-elected in 2020, especially if the Dems nominate some crazed liberal that makes people nervous.

I am starting to see some fatigue, the reduced enthusiasm of the protests and the general fizzling out of the anger against Trump after a fever pitch for a year. It would be interesting to see what Trump could get done if he didn't have to fight with the media (and his own party) over every single issue and koi pond but the ideologues in the media are so out in the open in declaring war against Trump that I don't see that happening.

As I said, it has been a surreal year since the 2016 election. It will be an equally crazy ride over the next twelve months leading up to the 2018 elections, especially if there is a war or a Supreme Court vacancy. You better buckle up, it is going to be a bumpy ride!
Posted by Arthur Sido at 10:01 AM